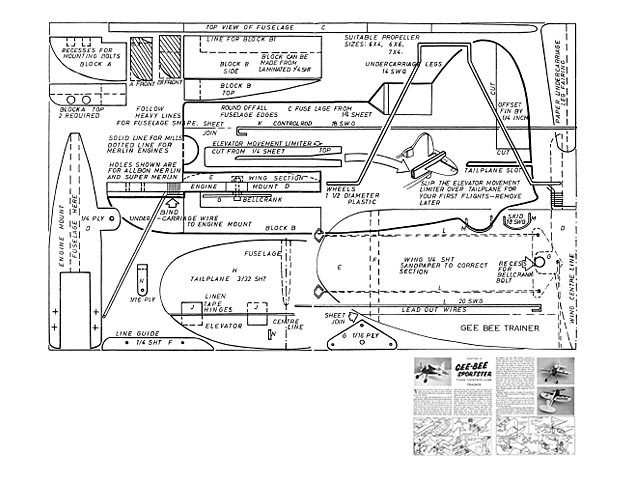 Quote: "YOUR first control-line trainer must be simple to build, easy to fly, and quick to repair. The GEE-BEE Sportster fulfils these requirements perfectly. So let's get started.

Trace on to balsa and plywood and cut out all the parts carefully. Drill holes in the hardwood engine mount. Bend the undercarriage wire to shape (a vice is very useful for this operation), and bind and cement it to the engine mount. Fit the control rod and lead-out wires on to the bell-crank as shown in sketch, but do not bend the hooks at this stage. Bolt bellcrank to engine mount and check for free movement of bellerank. Carve and sand-paper wing to section, taking care to leave the 1/4 in wide centre block across the centre of the wing.

Drill a recess hole in the wing under surface to take the bellerank nut and bolt and cement wing to engine mount. Pre-cementing is useful here. Pre-cementing consists in coating the surfaces to be joined with cement, and allowing to dry. Then put another thin coating of cement on the two surfaces and bring them together, holding or pinning together until set, Pre-cementing makes a far stronger joint. Sandpaper round edges of fuselage and cement wing-engine mount assembly into slot in fuselage. Wing must be at right angles to fuselage.

Add wheels and fairings. Wheels are retained on axles by either close-fitting plastic tube, or cup washers soldered to axles. Make tailplane and hinged elevator. Cement horn (N) in slot in elevator and cement the whole assembly into the tailplane slot. DO NOT connect control-rod to elevator horn (N) at this stage.

Cut and shapeblocks B and B1. Mount in position. Put bolts in position for engine. (The long range tank can be fitted later. The tank fitted to the engine is suitable for first flights.) Now connect up the control-rod to the elevator horn (N). Slip the guide (F) on to the lead-out wires and cement to wing. Form the hooks on the lead-out wires. Check that when the hooks are level the elevator is neutral (neither up nor down).

Cut down the fin line and cement fin with rear edge 1/4 in to the right (viewed from rear). Add wire skid and bolt in engine. (Original GEE-BEE was tested with the Allbon Super Merlin.)

Model is given one coat of clear dope and then decorated with coloured dope or enamel. Original GEE-BEE Sportster is white with bright red trimming and black fuselage insignia. Give entire model one coat of fuel-proofer.

Balance model as shown in sketch. Fly on 20-22 ft thread lines (Read advice given in Chapter 12 on 'first flight' procedure).

If you are unfortunate enough to break your model, do not discard it. Make another part or parts from the plan and cement it together again. In this way your model will last a long time and give you lots of control-line flying experience.

You will notice that on the plan we have included an 'elevator-movement limiter'. This little device stops you from moving the elevator too much on your first flights. You can take it of later on when you have gained confidence. " 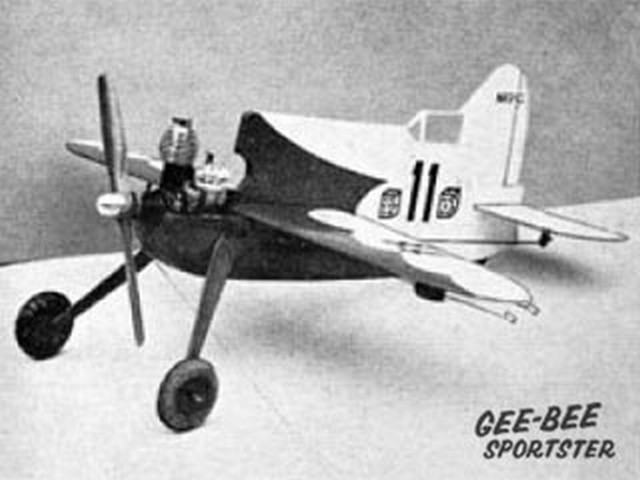