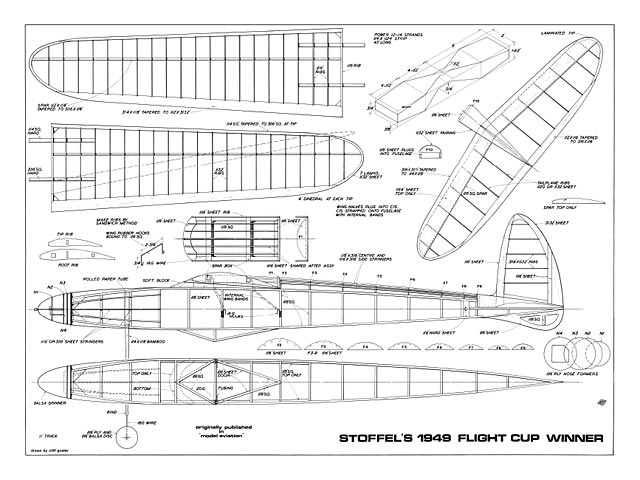 Quote: "Plans and instructions for building one of the best British Wakefield designs of 1949. Flight Cup Winner, by Edwin Stoffel.

MY original 1949 Wakefield design was in many respects similar to the 'Aristocrat', which appeared in the February 1949 Aeromodeller. The new model featured a more streamlined fuselage, tapered wings and flight tests showed it to be very stable. However, the duration was not quite as good as I had hoped for and some changes were obviously called for.

When Ron Warring's Voo-Doo (oz10049) design was published in the 1949 Model Planes Annual, this seemed to me to be the ideal contest layout. So in order to try out this idea, a streamlined slab-sider fuselage was drawn up to suit the existing flying surfaces of my 1949 cabin design. The results with this new combination were such a great improvement over all my previous Wakefields, that I decided to abandon the idea of a cabin layout altogether. It was with this model that the 1949 Flight Cup Contest was won, with an aggregate of 804 seconds.

The model should prevent no difficulties to a fairly ex-perienced builder and therefore detailed building instructions are unnecessary - only a general outline of some of the more intricate points being provided. Plans on the adjoining page are reduced to 1/4 scale - the full size original being available from the publishers. Full size ribs and other components are given overleaf.

Fuselage. The basic structure consists of HARD 1/8 in square balsa with 1/16 sheet formers on top - and 1/8 x 3/16 stringers added. The streamlining block in front of the wing is of soft block and hollowed out as indicated. Build up the dethermaliser box from medium 1/8 in square and fit a 1/16 sheet trap door. Line the interior of the box with notepaper instead of the usual sheet balsa, to prevent chute ' hang-ups.' Credit for this idea goes to Dennis (Elmic) Elmes of the Ilford Club. Use 1/8 sheet balsa for the rear peg attachment..."

Update 12/09/2018: Replaced this plan with a clearer copy, thanks to DBHL, theshadow. This one says "Drawn by Cliff Goater". 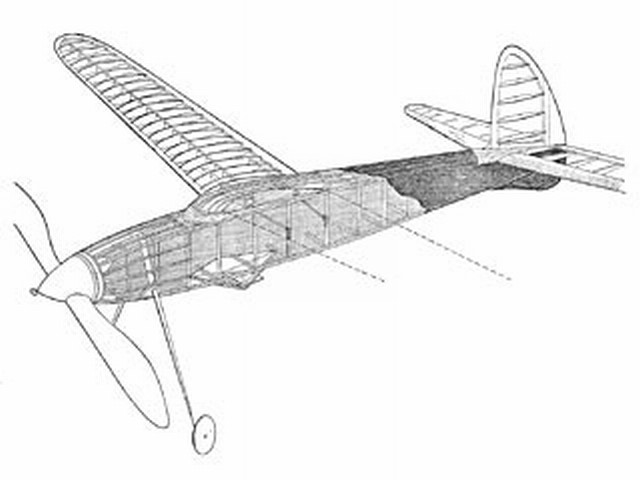