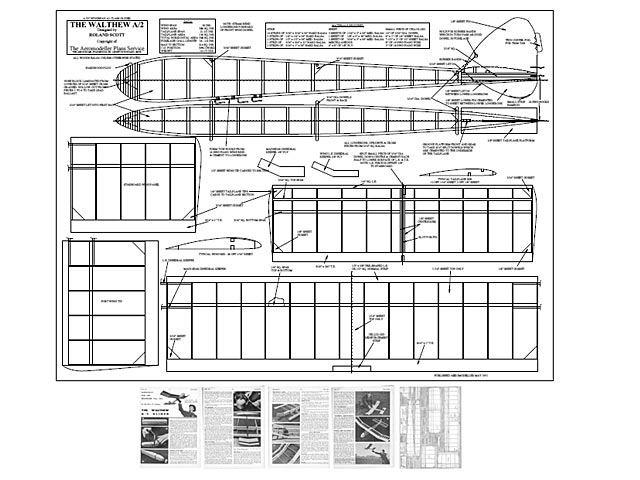 Walthew A2 Glider. Free flight glider model. This is a modern redrawn plan in PDFvector format.

Quote: "The Walter A/2 glider, by Roland Scott. Especially for the beginner Part XVI.

As was stated in last month’s Especially for the Beginner article, this month is intended for beginners but it is not supposed to be a first model. As a third or fourth model, however, it will offer little difficulty, although owing to its relatively large size you may get the idea that it will never be finished! The model used for illustrating this article was built at top speed using every available spare minute and some extremely late nights (followed by hectic mornings!) and took exactly a week, which shows that it can’t be very complicated. But if it is your first large model you will probably find it rather a slow job; the result, though, will be more than worth the trouble.

Scattered through these notes you will find one or two suggestions which experience has shown to be improvements, though only in slight details, on the original design. For instance it was found that the wing was held more firmly in position when the dowels were set slightly nearer together - inside the adjacent vertical spacers instead of outside them. Again, the underfin would be much stronger if laminated from cross-grained 1/16 in sheet; on the original this unit snapped off on a hand-glide in gusty weather just before the outdoor photographs were taken, the result being a slight loss in directional stability - ie. a tendency to wander from side to side, the direction of the flight being affected by any unexpected puffs of wind.

Cutting out the Ribs: The method here is identical both for tailplane and wing, so we will deal with the latter only. First trace the rib outline twice onto 1/16 in plywood. If you are using a ready shaped grooved LE, then the forward end of the ribs will have to be tongued (as in the illustrations) ; if a 1/2 in square spar is used, it will have to be straight. Cut out the ply master ribs, and sand them to a uniform accuracy. Test the spar holes with the correct size of spar, and see that the tongue fits snugly into the LE groove.

Now cut up two full sheets (36 in x 3 in) of 1/16 balsa into rectangles, slightly larger than the rib outline, and sandwich them between the two master ribs with pins pushed through from both sides. Since the pin points must reach comfortably past the middle of the sandwich, you will need extra long pins, or failing this, do the job in two instalments - thirteen ribs at a time.

Carve and sand the balsa rectangles to follow the outline of the master ribs. Fig.1 shows the rectangles pinned in place between the ply ribs. Use a small hacksaw to cut out, the spar holes (see Fig.2) and finish off neatly with a file and smooth sandpaper - see Fig.3 which also shows a cross-section of the LE.

As there are no formers to worry about, we can go straight on to the fuselage..."

Hi Steve, The Walthew A2 is one of my all time favourite designs. I built one in 1956 intending it as a vehicle for a pre-programmed flight control system I wanted to develop, but that idea was abandoned simply because I enjoyed the model so much in its free flight form. The offset towhooks worked very well. The model, trimmed to circle left, would veer strongly right on release, then straighten up before veering left just prior to release. Nowadays I have another one which behaves in just the same way. I have even flown it successfully from a bungee. It is actually the smallest model allowed under the A2 rules in force at the time, but its performance is still comparable with other A2 designs from the period. Nice to see it on your site. Best wishes,
TonyBrookes - 19/03/2015
Add a comment