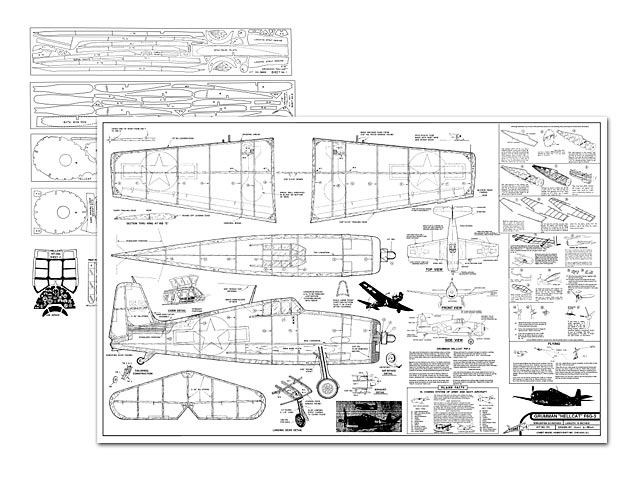 Update 04/12/13: Replaced this plan with a clearer version which also includes full templates, thanks to ErikJohnson who says quote:

"Greetings! In your endless quest to civilize the heathen colonials and restless citizens of the dominion, I offer a nice clean version of the Hellcat by Comet models. There are some rather crappy scans of it out on the web, so this one should make life easier for all. I remain in the service of the Queen," 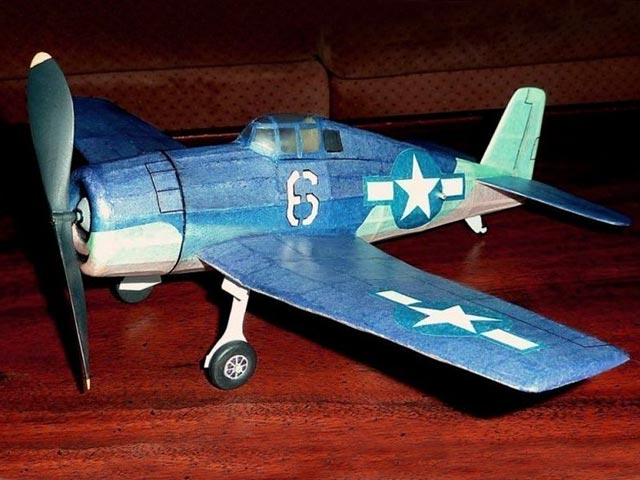 Hi, Steve. There is an error in the name of this plan--but it isn't one committed by you. Comet mislabeled this plan: the manufacturer's code assigned to Grumman by the US Navy was "F" rather than the logical-sounding "G," which was already assigned to Great Lakes. So the plan should have been titled F6F-3. Don't quite know what you should do--on the one hand, the aircraft being reproduced in model form is an F6F, but anyone looking for the Comet plan specifically may know it under its title, F6G. Your call, I guess! Thanks for all the great plans and all the hard work. Your site is a true gem!
markm - 06/12/2013
Thanks mark, have now added 'F6F' into the description text, so it will at least show up in searches, even if it's not in the title. Yes, I think I'm inclined to stick with whatever title it has become known by.
SteveWMD - 06/12/2013
A caution on this one. In starting the build, I noticed that the parts sheet is a slightly different than the plan sheet. You can work this out by measuring a rib, for example, on the parts sheet and the plan sheet and doing a ratio when printing out one to match the other. My pdf reader/printer allows a pergentage zoom setting so the one can essentially change the scale of the drawing.
MrT - 14/01/2020
Here’s the F4F Wildcat's big brother, the Grumman F6F Hellcat (oz262) from Comet Models [main pic, 003-006]. The Hellcat proved to be a real game-changer during World War Two. Used by the United States Navy, United States Marine Corps, and Royal Navy Fleet Air Arm, it was credited with destroying a total of 5,223 enemy aircraft from 1943 to war’s end in 1945. Many a Zero pilot made the fatal mistake of believing he was engaging a Wildcat when it proved to be a different “cat” altogether. The Hellcat was a genuine air superiority fighter aircraft.
This model was constructed using the old Comet plan supplied from Outerzone as a guide and of course, was modified here and there (but not much) to speed the process along. Naturally wire was used to strengthen the landing gear. A "pulled" celluloid canopy and molded plastic propeller were also utilized. Otherwise, the inspiration is entirely Comet. Thank you, Steve, Mary and Outerzone!
Neal Green - 13/03/2021
Add a comment