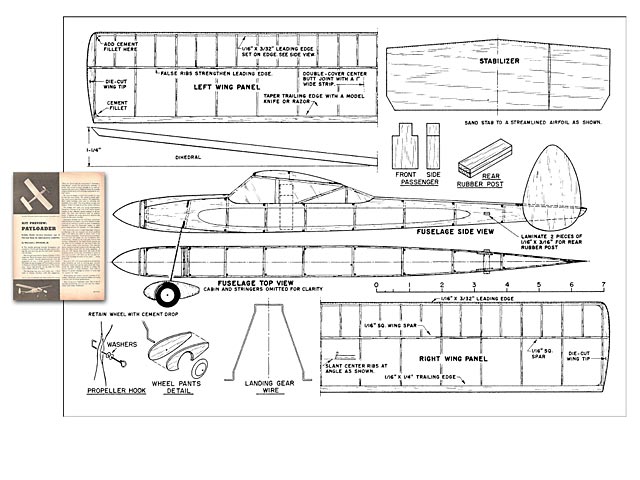 The terriffic growing interest throughout the country in PAA-Load flying with gas engines during the past year has proven that model builders like the idea.

The thought occurred to George Gardner of Pan American World Airways - why not PAA-Load for rubber models? Almost simultaneously with his suggestion to me, a letter arrived from Dallas Sherman, the grand-pappy of PAA-Load, currently in Tokyo as Oriental Representative of Pan American. Dallas had already set up rules for PAA-Load rubber events in Japan.

The thinking was now well under way. I fired back at George Gardner with the suggestion: Why not PAA-Load for everybody? Develop a 'one-design' model for school-yard contests. A model that would be small enough to be built in-expensively and turn in flights of about 30 seconds, using a plastic prop and carrying a payload of one-half ounce.

We tried to design a modei that would not only fly but also look pretty. We added a plastic spiner, wheel pants, and twin rudders. For simplicity, sheet balsa fuselage sides and an all-basla tail assembly were used. The wing design is neat and simple. False ribs keep the airfoil section efficient.

The design met with our flying expectations. Using four strands of US T-56 rubber winder wound, it was officially timed outdoors at 28 seconds. The time was identical with or without cargo! Outdoors the cargo seemed to stabilize the model in the gusty weather.

Payloader contests can be held most anywhere. Club members will have a lot of fun before or after meetings by having a contest as part of meetings. Needless to the Payloader makes an ideal schoolroom project or seventh- to ninth-graders.

For those who want to build Payloader without purchasing kit, we suggest yoa select medium light 1/16 balsa and sand to about 1/20 if no 1/120 stock is avaiulable. Construction is so straightforward that the plans can be considered self-explanatory. About all we need note here is that notches, indicated by the black squares on the sides of the fuselage, are cut out to take the 1/16 square balsa cross members.

The fuselage inside uprights are first glued to the fuselage sides, then the sides joined with the cross members. A strip of 1/16 square runs down the back of the fuseiage center on the top. Roundness is given to the nose by sheet 1/16 stock on the top and bottom of the fuselage forward of the cabin; shape as shown.

Note the 1/16 x 1/4 in pieces that serve as fuselage crosss members as well as landing gear mounts. Stabilizer wood sizes are the same as for the wing. Build the cabin exactly as shown to obtain the proper amount of wing incidence. Bore hole in dummy to permit passage of rubber or make legs 1/4 in square, 5/8 in high.

When flying the model, use four strands, of 1/8 in rubber. Naturally, stretching the rubber and using a winder will increase performanse.

Start flying your Payloader soon. Try to hit 30 seconds consistently and you can take on competition with other Payloaders."

Update 15/08/2019: Have changed the designer on this one to Don McGovern, thanks to Eduardo. It is safe to say the Bill Effinger credit in Air Trails was for writing the article text, but the model itself was designed by Don McGovern. 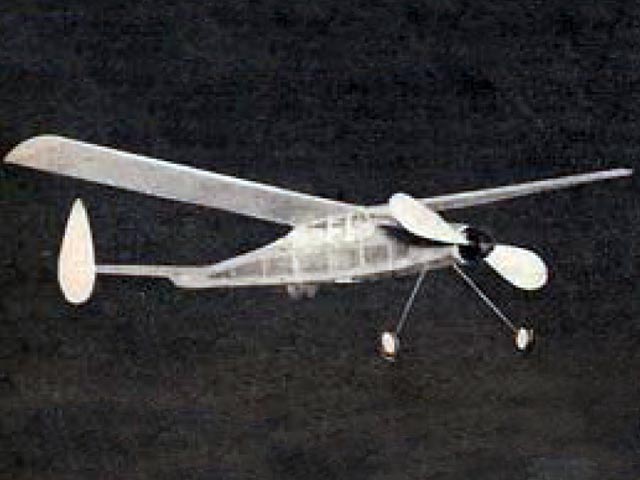