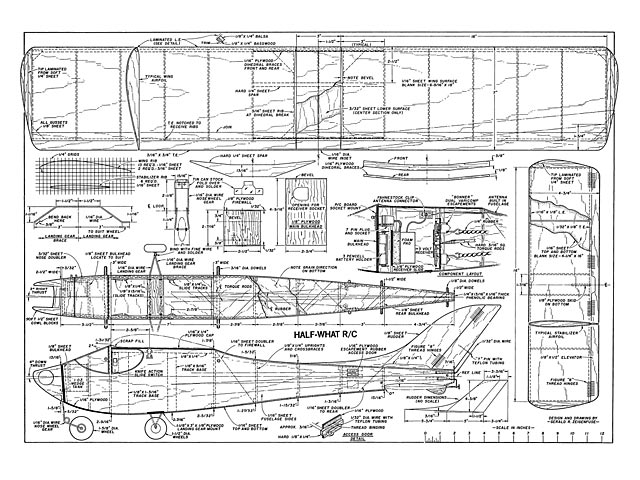 Half What. All-sheet single channel RC sports model for .049 power. From FM 1963/7, and by Gerald Zeigenfuse.

Update 04/01/2013: Uploaded a clearer version of this plan, thanks to theshadow.

Quote: "'Half What' is a quickly constructed 1/2A R/C model due to its being almost completely constructed of sheet balsa. Yet, it is still light enough to be slightly over powered with the latest 1/2A engines. A Cox .049 Golden Bee, RR-1 or the Cub and Fox .049's are ideal power. A Holland Hornet .049 or .051, a Cox T-Dee .049 or a Fox .07 engine will be more power than you need, and will give wild performance for the more experienced. We are presently using a Hornet .051 with a 6-4 prop and a fuel of 10 to 15% nitro. When we are in a more leisurely mood, we plug the intake to reduce the power.

In Half What we have tried to produce a plane that would have forgiving characteristics, (we all make mistakes) yet still be able to stunt. We think we have accomplished this and more. We were surprised to see that ballooning was held to a minimum, yet the plane will loop easily, rudder only, after two spiral turns. We are now considering scaling up the design for future rudder-only contest work. Our original intention was to have basically a rudder-only plane trimmed to fly flat to keep ballooning to a minimum. We could always loop by employing a kickup elevator. We had an opportunity to pick up a set of used Varicomps so decided to add down elevator for a little extra excitement.

With a high lift airfoil such as we employ on this plane, down elevator isn't too effective. It starts to dive, but as speed and lift build up, the dive turns into a screaming, almost level flight. We are using only 1/8 to 3/16 up and down movement. More down elevator movement would give us a steeper dive, but then the loops would be too tight. You only need enough up elevator to change trim in order to loop. If you can work out a differential set-up on your elevator to give twice as much down as up, you can get your almost vertical dive and pretty loops too. Another alternative was to use a semi-symmetrical airfoil. This, we felt, would be going too far to gain almost all out stunt performance when all we wanted was a fun ship.

This plane is designed to use the latest all transistor equipment and the weight saved here was put into the structure. We use a 3 volt all-transistor relay type receiver of popular make. We have found, that for best performance with these receivers, nicad bat-teries are best and to use three batteries in series for 3.6 volts. We are using three 450 mah pencell type ni-cads to power the receiver and escapements. We feel that 250 mah button type ni-cads would work just as well and give as many as 25 to 30 flights between charges. The 450 mah pencells are definitely over sized although their weight up front is helpful.

Although the construction is a little different, it is not difficult. The wing construction was lifted from the 1951-52 Zaic Yearbook and used on an earlier 1/2A R/C design of ours eight years ago with much success. Instead of using a flat stab of 1/8 sheet, we decided to split it down the middle for two 1/16 sheets, add a few ribs, and come up with a stab that is lighter, (due to being able to use softer wood) stronger and warp free.

The swept back rudder doesn't add anything except looks. It is larger than the rudders found on most of todays R/C planes, but we feel it is best as shown. We purposely made it - oversize, and trimmed it down on successive flights until we had the desired turn characteristics. That is, it will hang in a turn for about 270° of a circle unless taken out by opposite rudder. Further trimming of the area will allow the plane to straighten out sooner but we prefer it as is. Weather vane stability is excellent with this size rudder and keeping the nose pointed upwind is no problem even under gusty conditions..." 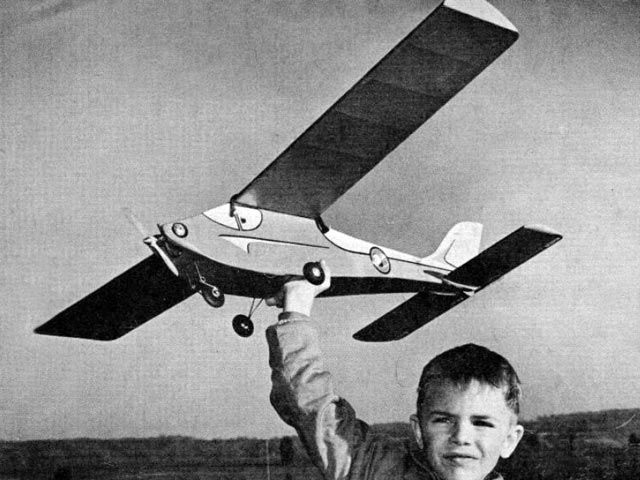