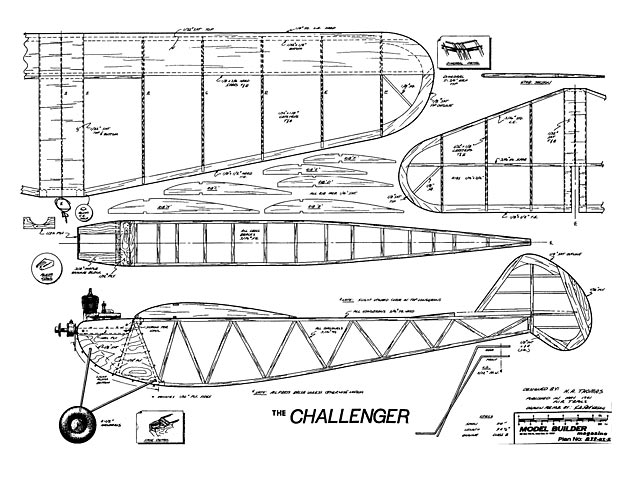 The Challenger first appeared in May 1941 Air Trails. It then reappeared with the named Tiger (oz1065) in the Air Trails Annual 1942. This here is later redrawn plan by SA Patterson for Model Bulder in 1979.

Most any modeler who has been involved in Old Timers for any length of time has at least heard of HA Thomas, but go to any OT meet nowadays and you probably won't see even one of his many designs. That's because HA's models, for the most part, were intended to be simple-to-build, steady, stable fliers, not all-out contest machines. The Challenger, featured in the May 1941 issue of Air Trails, is typical of his approach to model aircraft design.

According to the original text, HA designed the Challenger for his sister, Mary Louise, who had just won a class B engine and needed a model for it. What else to do but to get big brother to draw up something? As it turned Out, the model was quite a performer, winning 1st places in the first two contests entered.

The Challenger spans 51 inches and has a wing area of 423 square inches, which means the model has to weigh a minimum of 23-1/2 ounces to be legal for modern Old Timer contests. Construction is the last word in simplicity and should give no problems. The only suggestion we can make is in the interest of a much stronger wing, and that is to use the time-honored plywood dihedral brace in the center section, instead of that dumb stick shown on the plan.

As an interesting side note, the Challenger was actually published twice, but not under the same name. In addition to the 1941 article, the model was featured in the 1943 Air Trails Annual and was called the Tiger. The plans and text were identical to the 1941 version, except that one of the photos was replaced by an exploded drawing of the model, showing the major components. The model was the last of a four-part series of beginner's models, starting with a hand-launch glider, then a simple all-sheet stick rubber job, then an all-sheet full-fuselage rubber model, and then the Tiger.

Why the model's name was changed is anyone's guess, unless the magazine people wanted to convey the idea that the model was designed especially for that four-model series.

Old Timer fanatics who go so far as to duplicate the original model's color scheme might want to make an exception in this case. The Challenger was painted ivory, with gray-orange, gray-green, and blue-black camouflage. Not recommended as the best color scheme for locating a lost model!" 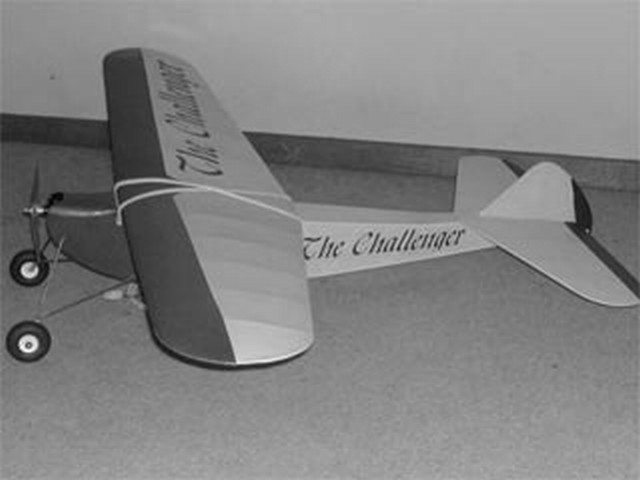 Hi Steve & Mary: No Flying but lots of building. Here are a few images of my Ben Buckle Challenger built from the kit but heavily referencing Outerzone's plans and images, Vintage1's updated plan and the original Tiger plan [more pics 003-005]. As part of the conversion process the fin has been enlarged, accommodation made for the lipo battery and a reduced dihedral to allow for the ailerons. I have used a Graupner 345Z compact brushless motor paired to a 40A ESC. Knower 80YY digital servos and radio link 2.4 ghz radio. It's covered with Solarfilm and inspired by my son's Gulf GT40. Keep up the good work.
AnthonyRoberts - 31/05/2020
Add a comment