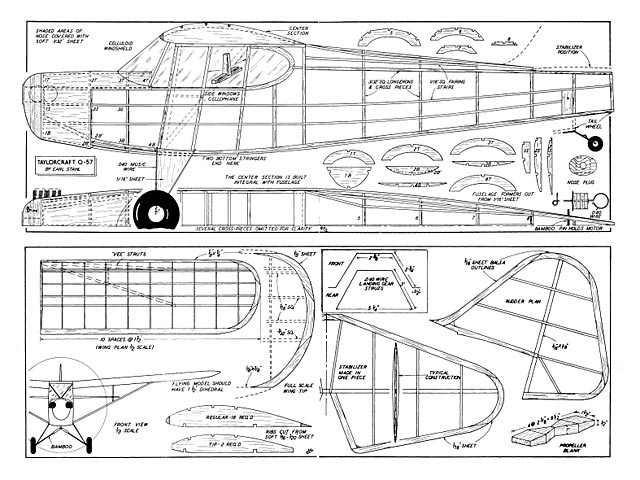 Quote: "AS THE result of the brilliant performance in the war games last summer the Army placed orders with the three largest manufacturers of lightplanes, Piper, Taylorcraft and Aeronca, for a fleet of 'aerial jeeps', more popularly known as 'grasshoppers'.

Operating under simulated war conditions, the 'grasshopper fleet' proved that lightplanes are indispensable in modern warfare. Flown by civilian pilots, these planes proved their adaptability for all kinds of observation work, personnel carrying, directing traffic and troop movements, even picking-up and delivering massages, maps, and materials in flight.

To further prove their value the grasshoppers repeatedly flew from seemingly impossible areas. In Louisiana army engineers prepared landing spots measuring a mere 400 ft long and 100 ft wide - and without considering wind direction. Obviously larger, faster planes could not use such bases, but these lightplanes in hands of skilled pilots made numerous takeoffs and landings. It was all in a day's work for pilots to land on highways, sometimes in open spaces between moving convoys, to complete a mission or possibly borrow a few gallons of gas. During maneuvers in Texas one pilot made several landings on the up-slope of a high mountain, then taxied around the gravel ledge rim, and took off on the downslope. Of course there were a few accidents, but they were of a minor nature and quickly repaired. The most serious mishap resulted from a spin as a pilot cicled low so he could 'Yoo-Hoo' to his girl friend.

Grasshoppers used in the war games were identical with ships available to civilians, all being converted tandem trainers powered by Continental 65 hp. engines. The only important additions were radio transmitters and receiver.

For our model we have selected the Taylorcraft trainer, known in the Army as the O-57. This plane is similar in appearance, construction and performance to other tandem trainers on the market. Available with Continental, Lycoming or Franklin engines of 65 hp, the commercial version performs as follows: Top speed 102 mph; landing speed 35 mph; climb 600 ft per min; cruising range 300 miles on 14 gallons of fuel.

The model has the same fine characteristics as the real ship: construction is easy and flight performance is matched only by attractiveness.

Constrcution. Before starting, the fuselage plans should be joined: incidentally, if you do not want to mar your magazine, make tracings of the plans on semi-transparent paper.

First make the fuselage underframe, of 3/32 sq balsa longerons and cross-pieces, indicated by light shading. Make two side frames, one atop the other for identity; the cement will probably cause them to stick together but they can be separated by a razor blade. When dry, invert the side frames over a complete top view plan and join with 3/32 sq cross-pieces at the cabin. Next pull the backs together and add remaining cross-pieces in the rear. Crack longerons just in front of the cabin to pull sides together as shown. Check continually for correct alignment.

The various fuselage formers are shown; cut from each medium grade 1/16 sheet. Cut the notches shown and cement to place. Stringers are medium hard 1/16 sq strips; fit in the notches and cement fast..." 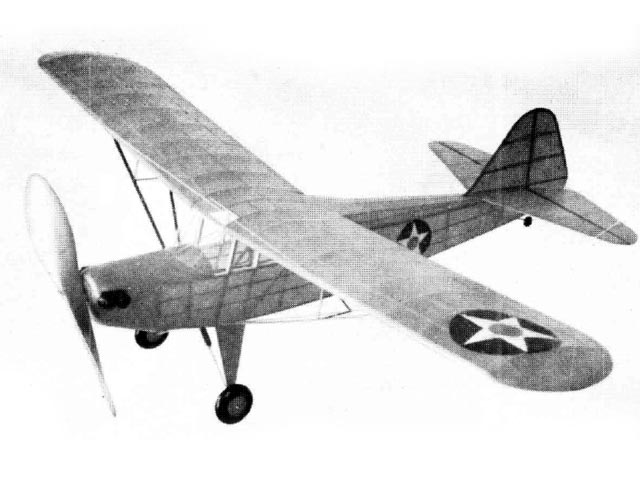