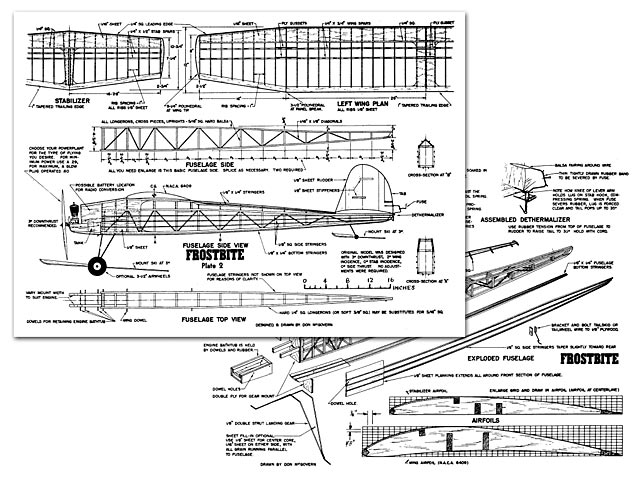 Minimum engine size is .29 and max is .60 glow. Wheels are optional and the wing chord looks to be almost a foot. This plan was printed in Flying Models Decade of Designs (1), published 1960.

Note drawings to make the skis are in the article pages.

Quote: "Here's a job that can provide you with sport flying the whole year round. It performs equally well with wheels, skis or twin floats.

Fossil remains of a Class C 'Free Flitus' were found recently in the freshly turned earth for a large housing development. Archaeologists called in were quick to venture opinions. A 'Flying Quakus' cried one. A 'Snuper Buccaneer' ventured another. Arguments ran hot and heavy and soon drifted to the cause of the gradual extinction of the Class C 'Free Flitus.'

Lack of flying fields, construction time, added expense, transportation and such were termed responsible. Some even said swarms of 1/2As stung the C's into near oblivion.

Whatever the cause, it is sad to see them go, for in many ways no other model can match the majesty of a C job in flight. The blustering roar of a .60 engine straining for the take-off and battling for altitude, followed by the effortless glide, lives on in the hearts of all modelers who were on the contest field a dozen years ago.

Fortunately our hobby is one of creation, and if we long for a seven-footer for a change of pace, we are free to build one. We cannot breathe life into a dinosaur's fossils, but we have only to prime our rusty trusty 'Cykes' and flip the old shillelagh to pour life into a giant model of our choosing.

In keeping with the spirit of things, we chose an ignition system for the seven-foot Frostbite. With the cold tang of winter shrouding the country and lakes frozen over, an ignition engine, skis and a rugged ship such as this are a natural. If fields are scarce come spring, we can switch to floats.

Construction is routine, so we will not bore you with the step-by-step account of how to smear cement on your good pants. Instead, we will endeavor to cover the points of interest in the design and construction

Performance will increase and weight decrease with a glow-plug engine. However, idling and more complete control of the engine is possible with an ignition system. This comes in handy for radio-control work, sport flying and seaplane operation with extended motor runs, as well as for test-flying and low-power take-offs. The slight loss in performance is not important, as this model is not primarily designed for contest endurance flights.

The engine and fuel tank are located in a bathtub-shaped section which straps on to the main fuselage with rubber bands. This permits radical or trivial thrust adjustments on the field. Access to tank and engine is also simplified. When in use as a seaplane, the engine may be readily flushed after a dunking. Tank design is waterproof.

The landing gear is double-strut, 1/8 in wire with laminated sheet fill-in, to prevent the rear strut from buckling inward and cause wheel misalignment.

On the original, the ignition units such as the coils, condenser and timer were enclosed in waterproof plastic sacks. In addition, rubber fuel-line tubing (from Elmic timers) was slipped over the ignition wires with the aid of rubber lubricant, to protect them from the water.

To facilitate easier chasing when in use as a ski ship or seaplane, the wing is not the pop-off type. Rather, it is strapped to wing dowels, permitting the wing to flex, but not pop free. It is tough enough to chase in snow or water, without hightailing after a wing flipping end-over-end down wind. This is optional of course.

The boxy nature of the fuselage is ideal for radio-control work. Present-day receivers, escapements and batteries will fit nicely in its spacious area.

Dethermalizing a model of this size and type is a problem. A burning fuse can sever only a thin, tightly drawn rubber band, so the usual method of coupling the stab to the fuselage with the band to be severed is out of the question here, as the large stab would not be held securely.

As shown on the plans, we resorted to a leverage system. The stab is strapped securely to the fuselage with rubber, while a spring under tension on the stab attempts to reject the catch. This catch is held in place by a lever, in turn held by the thin rubber to be severed. The system proved foolproof.

For added durability, two coats of clear dope were sprayed on the framework. This was done primarily to prevent absorption of water when the ship is in use as a seaplane. It also adds to the strength, fuel-proofing and warp resistance.

Double-covering the wing and stab will greatly prolong the life of the model, and prevent 70% of the annoying punctures usually encountered. One layer of white Jap tissue (with close pores) will prevent water absorption, and one layer of Skysail (open pores) will add the strength and color desired. The fuselage was covered with China Silk.

Use two to three coats of dope on the first layer of tissue, then apply the second covering wet, doping to extremities only, except on the undercamber of the wing, where both layers of tissue must be doped to every rib and spar. Four coats of clear dope on top of the final covering complete the job.

Test fly as a land plane if convenient, using very low power and gradually increasing same. There is no trick to flying with skis. Remember that the skis must be under sufficient tension to keep the nose high. Should one ski tip droop in flight, it could cause a spiral dive. Slight adjustments in incidence may be necessary when switching from wheels to skis or floats.

Once your Frostbite rumbles across the snow and lifts itself into the winter sky, we think you will be glad you tried your hand at flying a Class C 'Free Flitus'!" 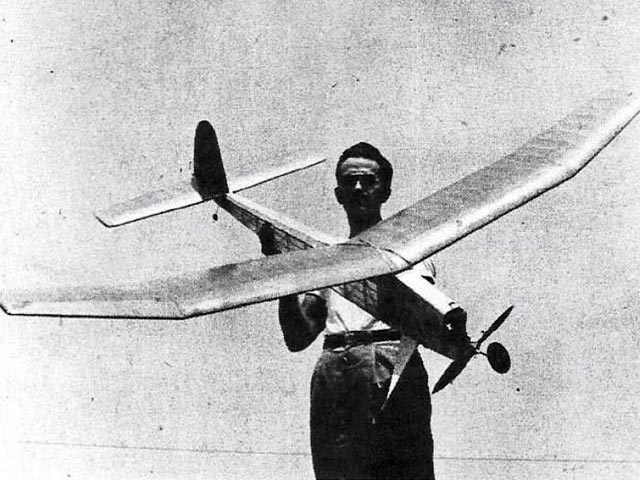