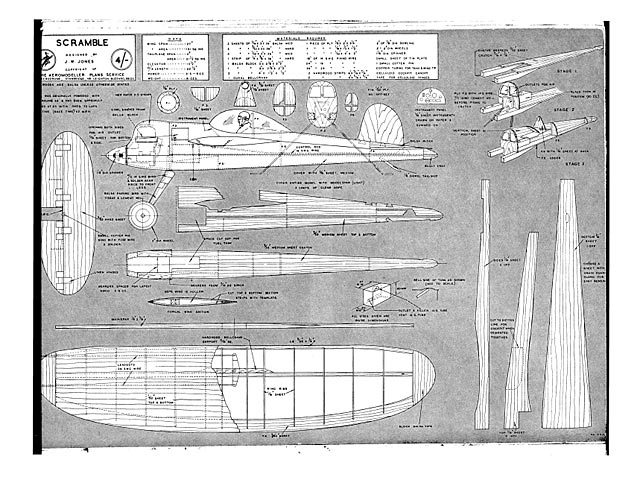 Quote: "Winner of the Stourbridge, Walsall, and Dudley races, plus the Festival Championships at Wembley Stadium, that fast class B team racer - Scramble, by Johnny Jones.

SCRAMBLE is a development from a season of team race comps and was designed to give the best possible performance under the conditions encountered in this type of fiying.

It features lightweight, simple, yet rugged construc-tion. The original was spinner landed four times during the first day, the only damage being broken props. The wing section is the fourth tried and was found to be the strongest, offering less drag than any of the others, without sacrificing the glide, which is over half a lap.

The first model won the Stourbridge C/L Rally, doing the five mile race in six minutes, also coming first in the speed at 76 mph. The engine was a Hurricane 24 Canadian motor. The Wembley winner is the fastest and this model is 'hot'. Since Wembley it was placed first at Dudley on August Saturday and second in the speed event at 81 mph. At Walsall C/L Rally it came first again and second in the speed event at 81 mph. This is using straight fuels 3:1 Methanol and Castor Oil. Hot fuels have been tried with speeds increased to 86 mph, but the laps were down to 50 with the 26 cc tank (they have been 72 laps at 80 mph). The reasons for this performance are the lightness of the model (16 oz) and the slim lines which help reduce drag. The model can easily be modified to take the new Amoco BB 3.5 and should be even faster than with the Hurricane 24 now used.

Construction. Fuselage. Cut out the crutch and cement engine bearers, as shown, using Britfix. Next, cement the vertical top and bottom sheets in place after placing the tank in position between the crutch ; cement the ply bulkhead B after first binding the undercart wire to it, and cement well. Now place the formers C, D and E in position and allow to dry.

Cut out stabilizer and elevator from hard 3/32 in sheet, now cement stabiliser into slot at rear end of fuse. Cut fin from 1/32 in ply and cement in place on top of stabiliser. Bend 16 swg wire and insert into one half elevator and solder control horn in place..." 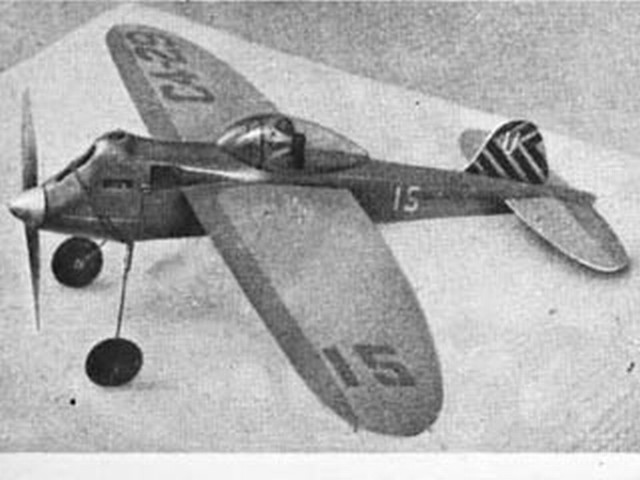