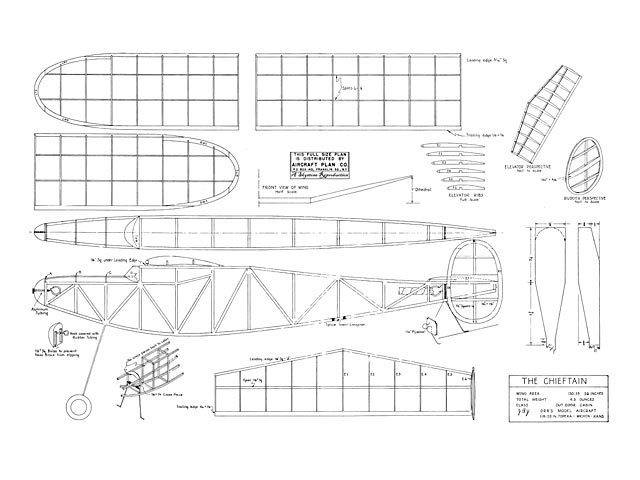 Quote: "The legendary free flight beauty takes to the sky once again!

In the beginning: The late, great, George Perryman was a member of The Thermal Thumbers Of Metro Atlanta (TTOMA) to which I belong. Recently, his family decided to get rid of some of his stash of old plans and magazines. This task fell upon our club scribe, David Mills. David brought the large volume of goodies to our last flying meet of the year.

I quickly latched onto a plan for Orr's Chieftain. After checking with Gene Wallock to make sure it was SAM-legal for the Commercial event, I decided to make this my next building project. I immediately checked and discovered that Jim O'Reilly had a CAD plan and a short kit for this model that is cut by Bob Holman Plans. I decided to go this route, placed my order - which was filled in a few days - and I was off and running!

Fuselage: Most modelers have their building sequence when constructing a model. I always start with the fuselage. If it is a rubber model, as in this case, I will finish all components relating to this area. Main fuselage, under carriage, nose block, prop, motor peg, etc. So, let the fun begin!

The first thing to do is cut some 1/8-inch square hard balsa strips for the fuselage longerons. I have a small table saw from Micro-Mark which does this very well. I noticed that the bottom longerons had large bends in them so I decided to pre-bend these. I soaked them in water, pinned them both over the plan and let them dry overnight!

I altered the plan to add a 3 degrees down thrust and widened the rear section to accommodate a 1/4-inch aluminum snuffer tube. Also widened the area slightly at the rear motor peg to better accept a blast tube.

Now it is time to start the actual layout. After covering the plan with plastic wrap, I number each upright with a Sharpie pen. Then I make a length of white paper to which I attach a strip of two-way tape and number a space for each upright. This way, I can cut two sets of uprights and attach them to the two-way tape and assure that they will be readily available when needed.

In building two matching sides for the fuselage, I like to use small lengths of balsa, in this case, about 3/8 inch by 1/2 inch, pinned to the work bench to hold the longerons in position, then add the up-rights. After letting the first side dry, it is easy to remove it, leaving the pieces of balsa pinned in place and build the other side to match.

I am trying a new, to me, Titebond white wood glue designed for carpenters when applying molding and trim. It sets fast, dries clear, and sands easily. So far, I am very happy with it.

After the second side has dried, I place the plan for the top view of the fuselage over a piece of sheet metal, switching to magnets and 1, 2, 3 blocks to keep every-thing square. Utilizing the same sheet of paper with the double sided tape, I cut all the cross pieces needed to finish the fuse-lage box.

Bending the landing gear is next. I like to make a jig by tracing the gear outline and placing it on a piece of plywood. Then I drive small nails at the point of the bends to help in accurately making the proper bends.

After that came the 1/4-inch snuffer tube for the DT and bending the tail skid. I made the rear motor peg using thick wall 1/4-inch aluminum tube for the core and cut a 9/32-inch aluminum tube into three parts. The 1/4-inch tubing was then in-serted into the three-piece outer shell. Epoxy secured the outer ends, leaving the center section free to rotate. This helped to keep the motor from bunching as it un-winds.

To round out this little group of miscel-laneous necessities, I opted to make the 11/2-inch wheels from 1/2-inch hard balsa. Once I had cut the rough outline, I mounted the balsa to my Dremel tool us-ing a long bolt. The wheels were formed using various Dremel tools and sandpa-per. When I was satisfied with the way they looked, I added a couple of coats of clear dope and glued short pieces of alu-minum tubing through the hubs.

Prop assembly: Large blocks of balsa are becoming hard to find, so I decided to laminate 1/8-inch sheet balsa to form the 1/4 x 1-3/4 x 1-1/4 inch prop block, once again, letting it dry overnight. First - this is important - I located the center of the prop blank and drilled a 1/16-inch hole for the prop shaft. The next step was to transfer, or draw, the rough prop layout onto the laminated prop block and cut it to shape using a band saw. Then came the fun part. As the old adage goes, carve away everything that doesn't look like a prop!

After final sanding, I covered both sides with three mil fiberglass cloth, finished with three coats of 50/50 nitrate dope, sanding between coats.

The nose block was also laminated, once again using hard 1/a-inch balsa. I also faced the front and back side with 1/32-inch plywood and drilled a 1/4-inch hole at an angle necessary to give me 3 degrees right thrust. Using epoxy, I glued a 1/4-inch hardwood dowel into the nose block. This was later drilled to accept the prop button. It was just a little added insurance that the wound motor doesn't crunch the nose block. The only other deviation here is the stop for the prop. Once again, taking an idea from a prop assembly I saw on one of George Perryman's prop layouts, I used a hidden nut as used when mounting gas engines and a bolt instead of the usual screw. Neat!

Because I want to take a 'bare bones' photo of this model, I will stop here with the fuselage and proceed to the wing.

Wing: A Bob Holman short kit makes building the wing a snap. All the wing ribs and curved pieces for the wing tips are already cut from very nice balsa. There is minimal laser burn which can be easily removed using hydrogen peroxide and a Q-Tip. I did make one minor diversion with the trailing edge. I like to inset the ribs into the trailing edge, so I cut it 1/8 inch wider than shown on the plan.

Once again, I used a Microlux 4-inch table saw to make the notches. After setting the blade to the proper depth and using a pencil, I marked the trailing edge wood as needed. Then, I stood the strip of balsa on its edge and made the notches.

I also built in 1/2-inch washout in each wingtip. Other than that, building the wing is straightforward. I used the Tite-bond white glue here also. After all the pieces were glued together, I sprayed a light mist of water over the whole struc-ture and allowed it to dry overnight.

When the wing had dried, I cut it into the three sections that form the wing. Using a neat sanding jig designed and distributed by Kevork Fags, I determined the angles necessary to form the dihedral and sanded the ends of the sections as needed. To join the wing sections, I used 15-minute epoxy, and did add an extra rib at the dihedral joints. I find it much easier when covering with the added thickness here. It was be-ginning to look a lot like a wing now. All that was needed was to sand the leading edge to shape and also the tips..." 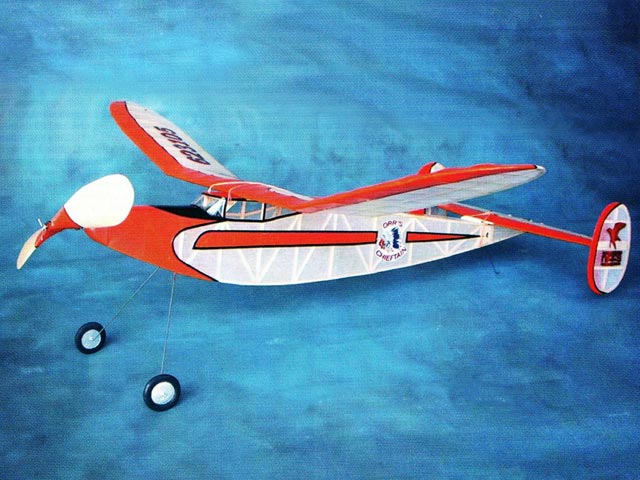