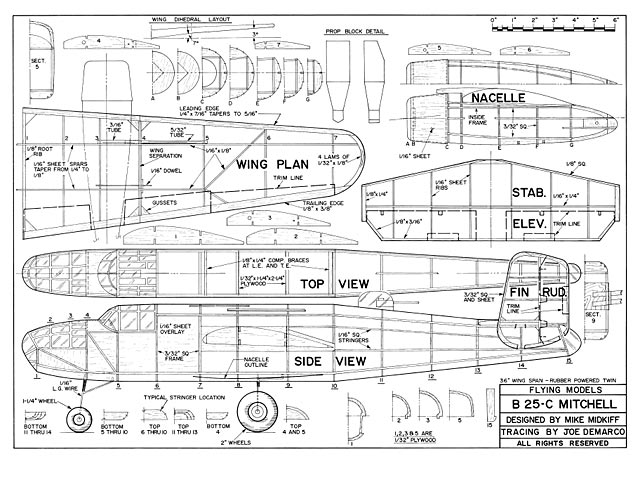 Quote: "This rubber powered scale version of the Dolittle raider is a fine flying twin.

The Doolittle Raid will remain in the minds of most older Americans as the first step in the allies taking the offense in the Pacific during World War II. The B-25 Mitchell was selected to strike at the Japanese homeland because of its range, striking power, ease of handling, and short take-off run. The Mitchell, in her many variations, flew in every theatre of the war and in tribute to her simple, efficient ruggedness, could be literally armed to the teeth and deliver as much destructive fire power as a naval destroyer. The ultimate occurred with the G&H Model, which was fitted with a 75 MM cannon mounted to fire straight ahead. Japanese shipping was an especially good target; a direct hit could sink most of the coastal vessels used between the islands.

Culmination of B-25 production came with the 'J' Model. A total of 4,390 B-25J's were produced from January 1944 thru the end of the war making this variation the most numerous model of the Mitchell series.

War weary B-25's soldiered on thru the rest of the war and were found on the inventory of many other allied nations in to the post war era. A few spent their last days as radar bombing trainers and some exist to this day as company aircraft, fire bombers and crop dusters.

This model of the Mitchell is surprisingly close to scale in terms of areas and outline. The only deviation that one can eyeball is the dihedral angle, but even then it has that characteristic wing droop in the outboard panels. The model's all up flying weight, less the landing gear, is approximately 4.5 oz which, across a 36 in span, is not too bad a wing loading. My model depicts an average B-C version in three tone color.

The olive drab over medium green upper surface color scheme has not been documented, but I still like the effect of this two-tone green above the grey underside. Many other variations of color schemes exist, even one replete in pink, to satisfy one's aesthetic inclinations.

My intent with this model was to produce a practical flying twin-engine rubber powered model aircraft which could be flown without 2 or 3 mechanics required to hold this or that while winding or launching.

Fuselage. Frame up the fuselage by building two sides directly over the plans, these frames are built from hard, stringy 3/32 sq balsa. Separate these after they are dry and add the 3/32 cross pieces. Crack the longerons at station #10 to give the angular break as seen in the top view. Add the upper and lower 1/16 sheet balsa formers from station #5 back; also, acid the two 1/32 plywood wing spar formers. It is important that these two formers match the spar stubs which protrude from the wing roots..."

Update 08/10/2012: replaced this plan with a clearer version, courtesy of theshadow. 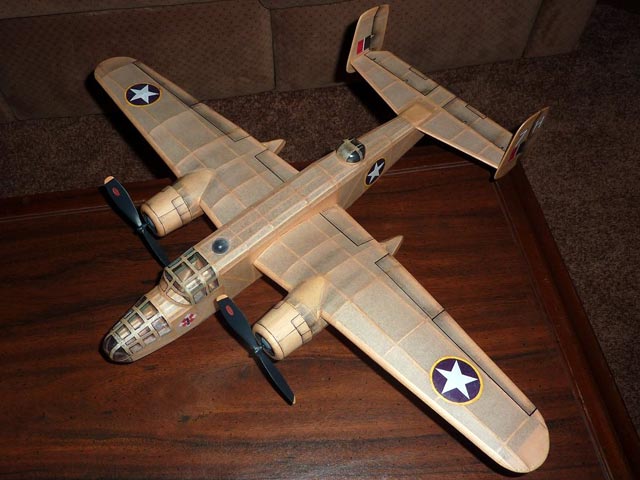 I had a friend who has since passed on that was a flyer for the 487 th Bomb Squadron 340 th Bomb Group (of Catch 22 fame) out of Africa, Italy, and Corsica during World War Two. Decided to build a North American B-25 Mitchell in his honor. Mike Midkiff’s model was the plan chosen (oz2575), reduced to a 26 inch wingspan [main pic, 006-010]. Of course, there are various design modifications to suit my own skills and preferences. Isn’t that what we all do? Thanks again Steve and Mary for all you’re doing for our hobby. Build thread for this project (as well as a bit of my friend's remembrances) is at: https://www.stickandtissue.com/forum/cg...
Neal Green - 15/10/2020
Add a comment