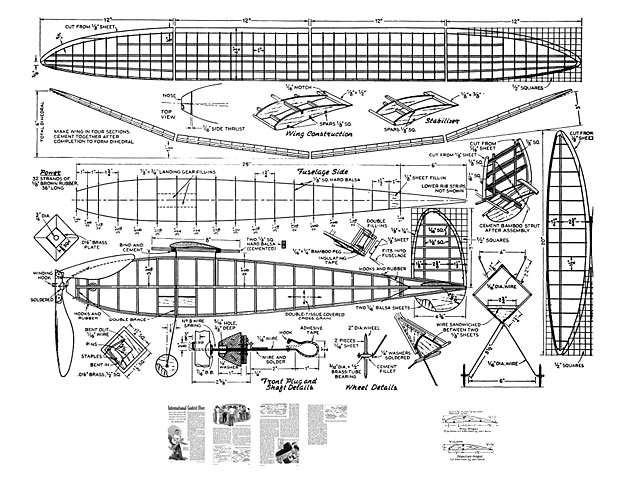 Quote: "International Contest Flyer. How to build a simple but highly efficient model plane with a folding propellor and all the latest improvements to give long flights.

THE modern sail plane is the closest approach to aerodynamical perfection. Its slim fuselage and long, narrow wing reduce drag to a minimum so that it can glide for thirty miles from a height of one mile without aid from thermals.

Model builders try to achieve similar per-fection because most of a model's duration lies in the glide. However, we have to contend with propeller, landing gear, minimum cross-section area of the fuselage, and weight as required by competition rules. Then, too, we have to get the model high enough so that it can hunt for thermals. This means more power, which is dead weight after the turns are used up. Since streamlining adds weight, we are torn be-tween two issues: High power or stream-lining. Both can be had, but it requires expert craftsmanship and thorough knowledge of model aerodynamics.

The model illustrated is an excellent compromise. Streamlining is used wherever it does not add weight. The propeller folds. The landing gear is short and made of wire. The fuselage has a good outline without abrupt angles. It is also set on edge because it has less resistance in a side slip than when set square.

The model was designed by Fred Bowers of Toronto, Canada, a member of the 1939 Canadian Wakefield team. He tells us that the model behaved exceptionally well right from the start. A day before the Canadian team left for New York, he almost lost it when it soared for about seven minutes on light winds. The best recommendation for the model, however, is its performances in the 1939 Wakefield competition at Bendix, NJ. On its first flight it made 13 min, 32.5 sec. An unfortunate take-off on the second trial put it out of running for the rest of the meet. Nevertheless, the first flight and a few seconds added in the second trial gave Bowers an average of 4 min, 32.6 sec for three flights. This time was enough to place him second with a margin of a full minute above the time of the third runner-up.

Fuselage. This is made by building two sides to the given dimensions. While cutting the uprights, be sure to make four of each to assure uniformity on all sides. Note how the landing-gear wire is sandwiched between balsa sheets and how the portion that carries the removable rubber-holding peg is reinforced. The fuselage is built full length and the tail portion cut off afterwards. Be generous with cement and let it dry well be-fore removing sides from the pin jigs.

Wing. Cut the required number of ribs, but slot only 28 for spars. The other 20 ribs are slotted later on, but they do have the front 90-deg. spar cut-out. The center two sections are not tapered. To make the tapered tips, plot the outline, cut curved trailing edges from sheet balsa, and bend the leading-edge spar to the outline with a pin jig. Now fit the ribs to the space deter-mined by the leading and trailing edges. A sketch shows how the ribs are shaped to smaller sizes. When all the ribs are in place, superimpose the top spar over the ribs and mark where it touches the ribs. Cut in 1/4 in cement the spar in place, and replace a portion of the cut-in with the removed balsa, to provide a smooth and continuous rib surface for paper covering. Before removing the tip from the jig, wet the leading edge spar so that it will hold its shape more readily. The tip is completed by slotting the bottom portion of the ribs to accommodate the various spars.

Tail surfaces. The stabilizer is made like the wing tips. The rudder is equally simple. Cut the outline from sheet balsa, cement two spars in place, and cement the small square strips to form a streamline airfoil. You may have to hold the two spars temporarily in place with balsa strips while the cement dries on the rib-forming strips.

Propeller. This is carved from the out-lined blank. When carving, leave the center portion with square corners. Be sure to give the blades..." 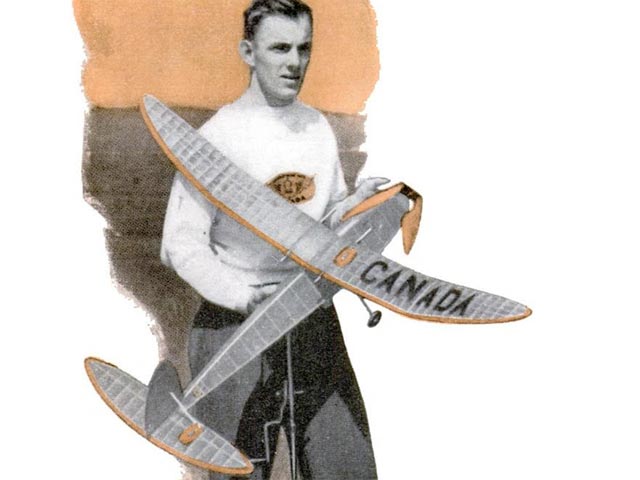 Have changed title of this listing to "Bowers Wakefield" from "International Contest Flyer" to help with searching.
SteveWMD - 30/05/2019
Add a comment