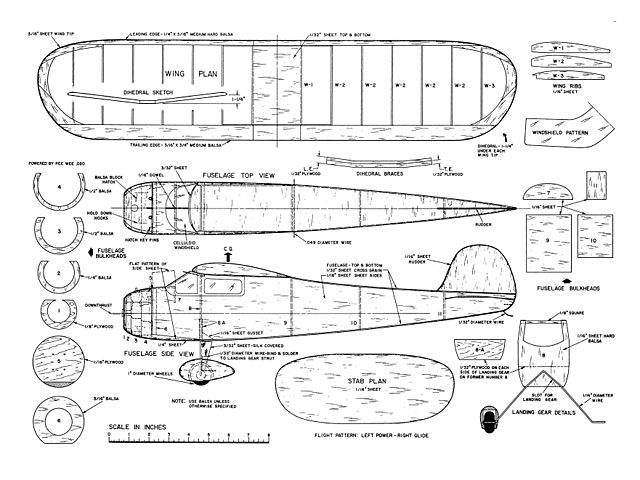 For free-flight fun, try the Mini-Coupe, a smooth flying little sportster of classical appearance. Peppy flying speed is maintained during the realistic low-angle climb, which arcs slightly to the left due to torque. No stall occurs when the motor quits; the 'Coupe' makes an 'S' pattern at the top, and glides smoothly back to earth in a wide right-turn. Such flights can be duplicated consistently, but do not launch with a full fuel tank or your Mini-Coupe will become a very small speck in the sky.

Trophies were not in mind when the Mini-Coupe was designed, but the rewards will be many, in the form of the compliments it receives every time it is exhibited and flown.

Trimming the original Mini-Coupe for flight proved to be a simple matter. It was safely flown at full power on the second flight, indicating that success can easily be obtained by beginners too. The procedure of testing was as follows, with added tips to cover any variations in flight behavior that could appear due to possible construction differences of various builders.

Our engine was installed with one washer between the firewall and backplate on the upper two bolts, for downthrust, Approximately 1/32in of right turn was warped and cemented into the last 1/4in of the rudder trailing edge, for a right-turn glide.

We made several hand-launched glides, which should be fast and flat, with no indication of turn. If turn should appear in the glide, be sure that it is not to the left. We then fired up the Pee Wee .020 engine, and made the first powered flight..." 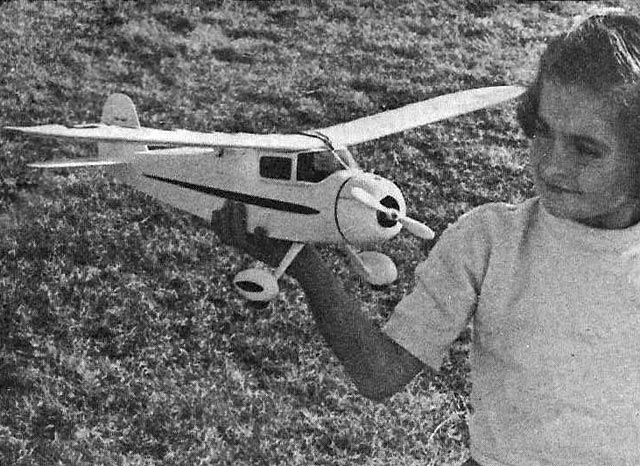