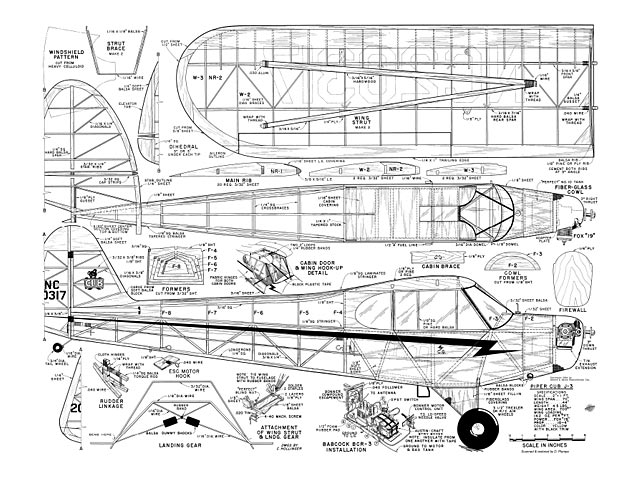 With an unparalleled record of 132 successful flights, this R/C model is a fine tribute to designer and radio.

If you've had success with the usual array of boxy R/C designs you're ready to give the Cub a try. She's not only a cinch to build and fly, but a model that really looks like an airplane. While the only deviations from scale are the increased wing dihedral and stabilizer area, it has more than proven itself as the total number of actual logged flights to date is 132 (approx 9 hrs in the air). Best of all she looks nearly as unmarked as when first soloed.

Credit must be split two ways - the inherent stability of the Cub design, coupled with our fool-proof Babcock R/C equipment. Several of the features came about through Dick Schumacher's influence, namely, the fiberglass cowl and demountable, shock-absorbing landing gear. The wing panels with the scale number of ribs are hooked on by means of rubber bands; they've proven their worth on several occasions already. The motor is mounted on its side to carry through the scale lines, in addition to expelling the exhaust downward, resulting in an oil-free ship.

One feature that really astonishes the R/C flyers is the full-scale operating rudder - but believe me it works to perfection, giving excellent control under power and in the glide, without any signs of over-control. In fact, more than a dozen modelers who had never touched a beep button before have flown this Cub without any trouble whatsoever.

Of course, anyone who has put time in the real Cub will attest to its easy handling characteristics, the model inheriting her big sister's stability..."

Update 30/01/2019: Replaced this plan with a clearer copy (scanned from fullsize), thanks to DPlumpe.

Quote: "Steve & Mary, Here's a much sharper scan of Chuck Hollinger's Piper Cub J-3 than the one presently on your site. Your present scan is one I made (note my initials 'DJP' in the lower right corner) several years ago of the small plan in January 1955 Air Trails magazine, thus isn't very sharp.

When that issue came out 63 years ago I sent off to Hobby Helpers for the full-size plan. It cost $.50 US plus $.09 for special handling and 1st Class US mail! That included plans for the controlline stunt Jamboree' (oz10675) model and the 'Little Arky' houseboat printed on the reverse side.

School, girls, family and career got in the way and I never built that Cub, though in 2004 I did finally build SIG's 1/6 scale Cub, an update of Hollinger's original design. Meanwhile, the plan suffered through decades of alternate fondling and neglect. By the time computers and scanners came around that plan was in bad shape and I put off scanning and cleaning due to the work involved.

Well, a couple days ago I came across that plan again and bit the bullet. I had it scanned and managed to clean it up in a single afternoon, using features of both PhotoImpact and PhotoShop. I think it came out quite nice. There are two areas of the scan that look like the scanner might've slipped since lines don't line up exactly, but those misalignments are on the printed plan, so I didn't 'correct' them. The scale is about 0.7% small, but that is also the printed plan and isn't significant for modelling.

Hollinger's Cub was kitted by Berkeley, then SIG, then updated by SIG, and is the granddaddy of possibly more RC Cubs than any other design.

Keep up the good work! DPlumpe" 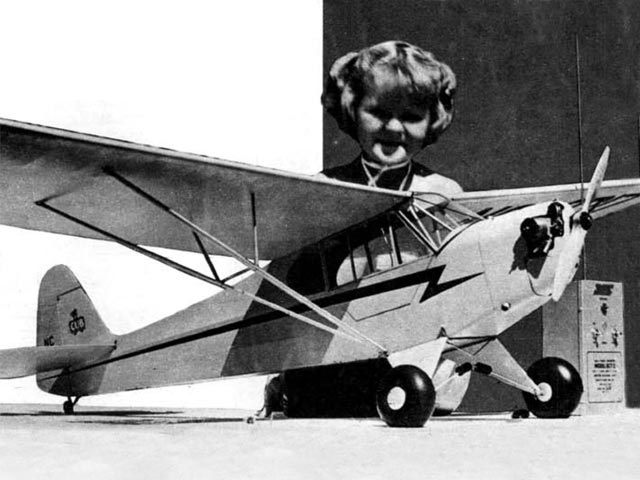