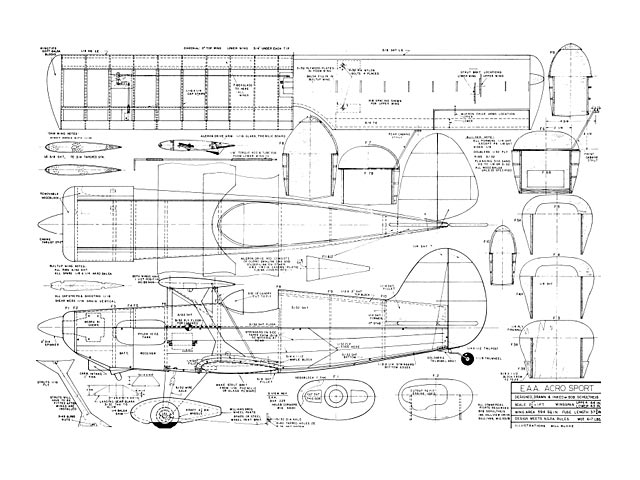 Quote: "The home-builders' acrobatic bipe that set the aviation world afire with its good looks and superb flight performance is now a basement project for the modeler. EAA Acro Sport, by Robert Schultheis.

There's a little blue and white bipe sitting over on the north end of the field that you are going to flip over. The EAA has done it again - so spoke fellow flier Ken Hinkel at the Oshkosh 1972 EAA Fly-In. With camera in hand I ran anxiously over to where it stood. What a sleek little bird, with one of the best looking paint jobs I'd ever seen - no checkerboards or upside down names. Just long smooth black and yellow slashes for stripes over blue and white. I stood there, flying a model of that biplane in my mind. One week later the plans were drawn and I started building.

The EAA is most cooperative on pictures and three-view drawings, right up to the plans for the real thing, which are available from them. The plane has rather slim wings (narrow chord), a fairly long nose moment and good tail areas. Try to keep the weight to six pounds, although mine is seven pounds and flies fine.

The nose is built right into the fuselage and then cut away when fitted to the engine selected. A little of the right front side of the cowl, back to F-3, is attached to the front block F-1. This is doweled and screwed on, thus completely eliminating a fiberglass cowl. The fuselage sides are 1/8 in sheet balsa with 1/32 doublers contact cemented to them. Former F-2 is really the front block, because the one-inch thick noseblock is removable. F-2 gets cut out, as does the 1/8" sheet side in front, to accommodate the engine used. This is done on the right front side, of course.

From F-10 to the rear of the fin is 1/16 sheet beveled on its edges to provide a smooth fillet. The bottom is 3/32 sheet. I installed a Tatone mount on F-3 and blocked off the left side of the cowl below the engine to get better circulation around the head. This cooling of the engine is critical. Cut out enough cowl to get air around the engine head. The opening on the front right hand side of the cowl is cut out and lets air in. A rule of thumb is: Let at least twice as much air out as goes in. I can't stress thiS enough.

The landing gear was made from one piece of 3/32" thick T-6 aluminum bent to shape. The axle is of 5/32 wire which runs up to simulated shock absorbers. The gear could be made entirely of wire and strapped to the hardwood blocks, This would also be lighter. Wheel pants are Williams Bros. with a 1/4 in balsa sheet around the wheel (tapered to 1/16 at the front and back) epoxied between the two halves. It's essentially a spacer to thicken the wheel pant, with a cutout for the wheel.

The cabane struts can be made two ways, either solid or as a strip. Bend up a sheet of 3/32 T-6 aluminum after laying out and cutting 'N' struts in their proper location. The second method is to use some 7/16 x 3/32 T-6 aluminum bent up to the sizes shown on the plan. Then add cross struts with pop rivets, or epoxy to form an 'N.'

The cabanes are bolted with 4-40 screws and blind nuts onto the 3/32" ply plate between F-5 and F-6. This ply plate is glued on top of the fuselage sides. Good alignment of the cabanes is assured because they are made and checked on a flat surface and then mounted on the fuselage. Shims may be added, if necessary, after flying to get proper trim. The interplane struts are made from 1/16 plywood, then sanded and sealed with Hobbypoxy. They are fastened to small brackets which are epoxied in the foam or built-up wing.

Their placement fore and aft in the wing is not critical (± 1/4 in is good enough) but the spanwise location gives the proper slant to the strut between the wings. These struts are placed outside (toward the top) of the brackets and have a 3-48 blind nut pressed in them. This blind nut is located and transferred through the bracket. Use nylon screws, if available. They are strong enough for flying pressures but will shear off, saving the wings, if ever necessary..."

Here are photos of my Acro Sport, which started from the article in AAM which you have [more pics 007, 008]. I bought the magazine new and always wanted to build one. But it seemed a bit small at 44". I also have a copy of Jack Stafford's plan at 50", but the fuselage was not scale as it had been narrowed up, too much in my opinion. So I scaled up the magazine fuselage plan the old way, pencil and drafting tools, to match the Stafford wing. The result is a 50" version of the Acro Sport with scale lines. It is a great flyer, but once again, seems small by today's standards. Maybe a 1/4 scale is due?
MikeBelton - 05/03/2019
Add a comment