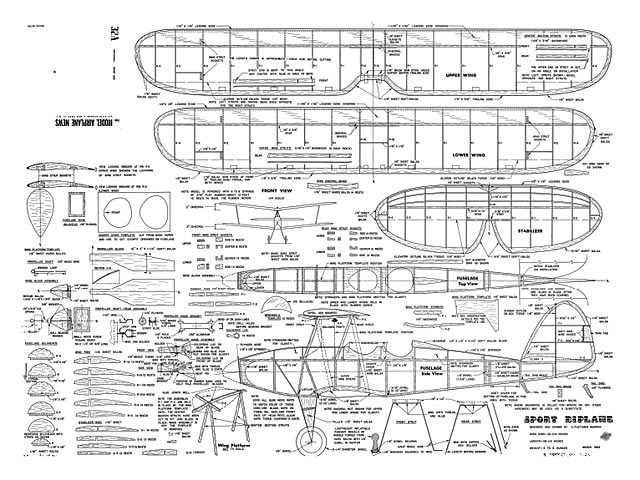 Quote: "The Sport Biplane design has been crystallizing in the author's mind ever since he took his first flight back in the early thirties. It can be said without fear of contradiction that there are few airplanes as pretty as a biplane. People have often asked just what prototype this model was fashioned after. Actually it was patterned after none in particular. It just came out this way in the process of making a nice looking and consistent flying model.

While it is not a contest ship by any means, be prepared to run if it is flown on a nice summer's day. It is just a model that is meant to be flown for fun - in short a Sport Biplane.

The construction of the Sport Biplane is conventional, The wood used is, for the most part, medium balsa except for the few places where soft or hard balsa is specified on the plans. The critical members such as the longerons and wing spars, are matched for strength. We have used SIG Balsa in all our models for some time and recommend its use for constructing this model.

First, cut out all the fuselage bulkheads, wing ribs, stabilizer ribs, and rudder ribs from 1/16 sheet. A template is helpful in cutting wing ribs to ensure uniformity. Reinforcing strips are glued to the fuselage bulkheads as shown. All wing tips, rudder outline, etc. are cut to shape from the thickness sheet shown.

The fuselage sides are built first using 1/2 in square. Build the first side over the plans and when dry remove and build the second side. Care must be taken to raise the 1/16 in sheet nose reinforcement flush with the top surface of the structure when building the second side. The sides are assembled at stations B and F first, then add the rest of the intermediate bulkheads making sure that the fuselage is square at this point..."

From June 1964 Model Airplane News, The 'Sport Bipe' designed and drawn by C. Fletcher Warren. One of the prettiest rubber powered bipes going! 34-3/4in wing span complete with detachable wings and folding prop.

Update 03/08/2016: Replaced this plan with a clearer copy scanned from fullsize, thanks to JJ. 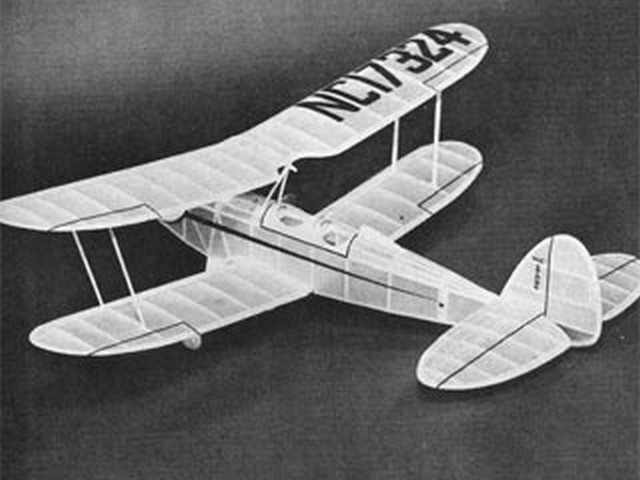