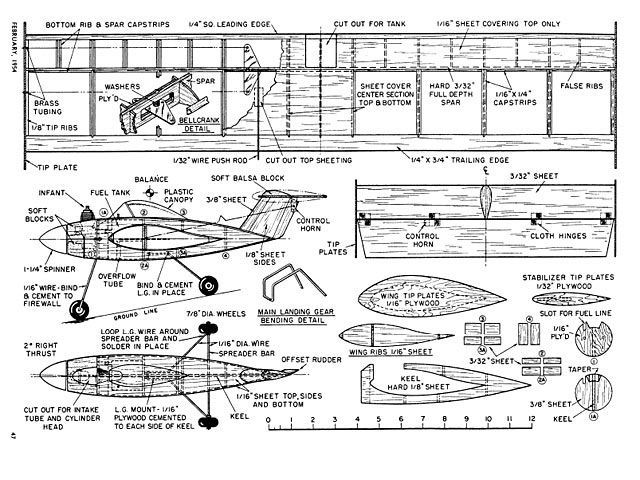 Nancy is the fourth in a series of Half-A models based on the idea of combining performance with structural strength. Half-A models normally fly much slower than do larger stunters. This perhaps is the prime reason they are better able to withstand the inev-itable mineralogical explorations which seem to plague even the most carefully designed and flown models.

Construction-wise, Nancy is quite simple if the following building procedure is followed:

Start with wing. The main spar carries the stress of the entire model so choose a piece of hard straight-grained 1/8 balsa. Mark off all rib locations and pin spar flat to your building board. Cement forward halves of the ribs and the false ribs in place and add leading edge; do not sand it to shape at this point. After allowing sufficient time for cement to dry thoroughly, remove it from board and add the rear rib halves and trailing edge. Install bellcrank. Sand leading edge to shape and add the 1/16 sheeting. Note that both spar and ribs are capstripped on the lower surface. Install lead-out wires and pushrod. Cover wing with lightweight Silkspan but do not dope it. Add the plywood tip plates.

The fuselage is built around a center keel which makes for simple wing to fuselage alignment and easily doubles fuselage strength. Use hard 1/8 sheet for the keel and see that it fits snugly on the wing. Cement it in place directly over the center rib of the wing. Cut out the wing as shown and trial-fit the fuel tank. The engine mount and all formers except the firewall are made in halves as shown.

Cement the engine mount (1A) to the keel and the firewall with nose gear attached to the mount. Add the remaining formers and then the sides. Install the fuel tank and cover the top. The rudder may be solid or built up as shown. Install the main landing gear, fuel overflow tube and cover the bottom. The engine cowling is carved from soft balsa and hollowed out as necessary for engine clearance. Cement the stabilizer in place, make certain that it is at zero incidence and aligned horizontally with the wing.

Apply at least two coats of clear dope to the wing and one or two coats of sanding sealer to all exposed balsa parts before color doping. If fuel-proof cement and dope were not used during construction it will be necessary to apply fuel proofer to the entire model, with special attention given to the areas around the engine and fuel tank. Nancy is a very steady flyer, but very responsive to control. Be sure that the engine is really revving before attempting an overhead eight or wing-over. Though the model flew very stably in windy Buenos Aires ('Good Air'), choose a calm day for the trial flight.

One last recommendation: refrain from employing your competition vocabulary in Nancy's presence, for she is a lady and will react as such.

Rodolfo strolled into our office with 'Nancy during a stop-over in New York City while on a trip from Buenos Aires to Switzerland. He had traveled by air from Argentina holding the little stunt model in his lap to insure safe delivery! RGC is 17, a 4th year student at St Andrew's Scot School. He says there are 7 hobby shops in Buenos Aires and 12 in all Argentina. About 10,000 modelers are active in his country; 400 of them as members of the Club Aeromodelista de Buenos Aires. Rudy started modeling in '44, has designed 35 stunt jobs." 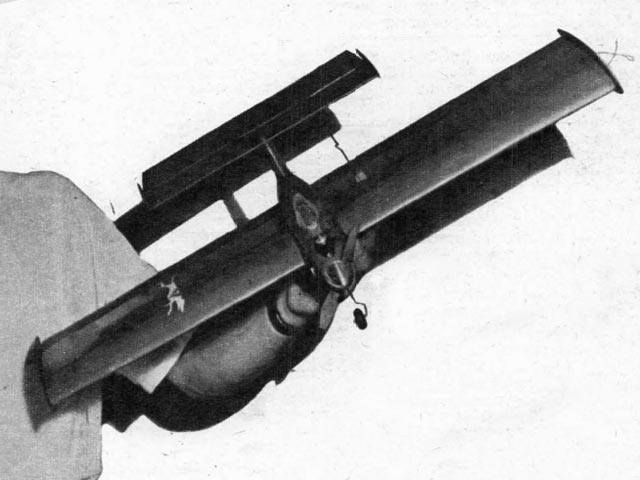