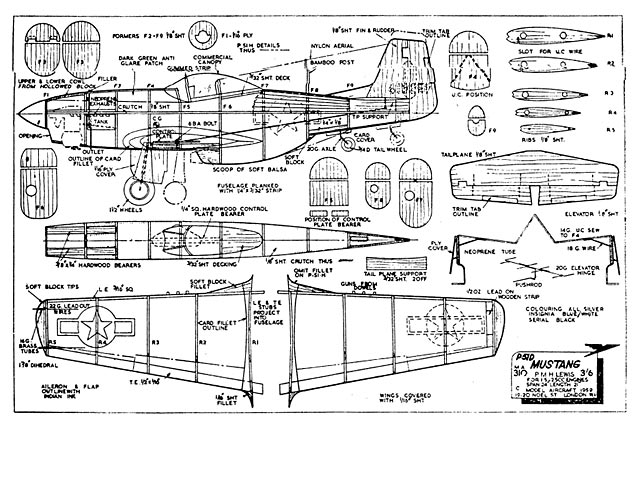 Quote: "Well, you asked for it, and here it is. We have had so many requests for plans of a Mustang with the blister hood that we specially commissioned Peter Lewis to design this 24 in span control-line version of the North American P51D Mustang.

As spirited in performance as its namesake, the Mustang was an outstandingly successful fighter of World War II. Continued improvements were made through successive marks of which the P-51D was typical of this fine, widely-used, long-range plane.

Compared with its heavy, bulky-looking brother-in-arms, the P-47 Thunderbolt, the Mustang evolved into a sleek thoroughbred, whose refined lines have been faithfully translated into an equally eye-catching control-liner. The reasonably deep nose allows a wide selection of 1.5 cc to 2.5 cc engines to be more or less concealed within the cowling, thus preserving the lifelike appearance.

Details are given in the plans for both the P-5ID and its later version P-51H, the so-called 'light' Mustang.

Fuselage. The crutch is the first part to be formed, using 1/8 in sheet in which are cut slots for bearers, push-rod and the stern-post. Cut the 3/8 x 1/4 in hardwood engine bearers to length and cement firmly into the crutch and check that their spacing suits the engine chosen for the model. The next step is to cut out the formers F2 to F9 from 1/16 in sheet..." 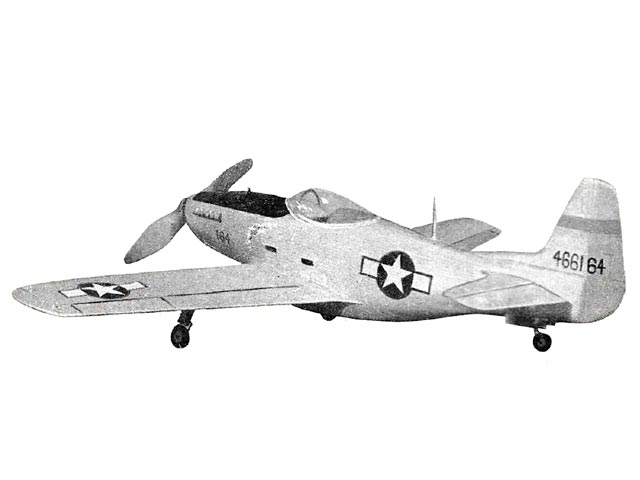