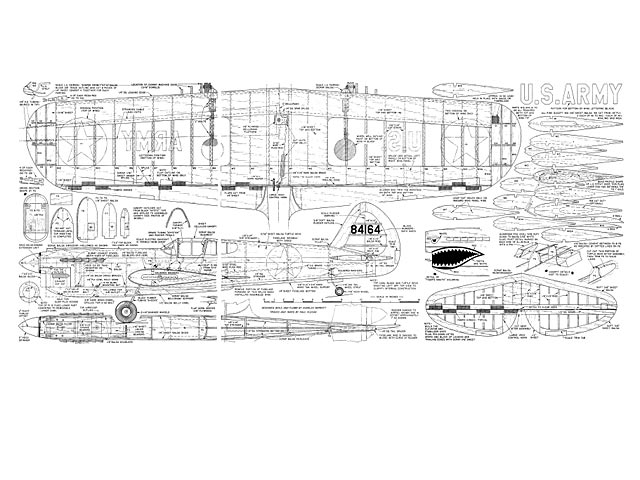 Who needs an introduction to that famous warbird, the Curtiss P-40? Much has been written about the almost legendary exploits of Chennault's Flying Tigers in the China Skies. Here a handful of Americans, equipped with the 'sub-standard and obsolete' P-40s struck fear in the hearts of the Imperial Japanese Airforce. The P-40 has won for itself a unique niche in aviation history, and while it was not the best fighter in World War II, it is among the better known ones.

The idea for a scale-like stunt model of this famous plane is not original -
and there are kits of it already available on the hobby dealer's shelves. But none offered me what I wanted: a model that looked like a P-40 yet had the ability to stand up to the best of modern-day U-control stunters. The result is this offering which will bow to none in stunt performance, and has few equals for eye appeal.

Our first version, while an excellent stunter, lacked a few refinements so important in major competition. A second was drawn up and underwent many changes on the drawing board before the first piece of balsa was cut. But it was worth it. The model shown here has doubled our expectations.

First entered in competition at the 1962 Florida State Championships, it won top place in Open Class stunt by a margin of over 100 points. Later at Jacksonville, Fla, it was first with over 600 points on its second official. At the Rebel Rally in Florida the powerplant blew a head gasket on the first official flight, but it still flew off with second place, a few points behind Dave Hemstrought's PT-19. Our Curtiss-like entry again captured a trophy at the all Dixie Air Championships in Spartenburg, SC.

It may come as a surprise, but the P-40, primarily a competition stunt model, entered control line scale at the Rebel Rally and placed fourth in that event. To the best of my knowledge, this 4th was a 'first' in stunt annals since it won a trophy designated for scale jobs!

The P-40 qualified for the Charleston Semi-Scale Stunt Team by consistently flying official patterns of 500 points or better. This team has, in all contests entered to date, placed 1st, 2nd, and 3rd - not having a fourth member.

Since basic construction will be fa-miliar to most, we will not overly concern ourselves here with standard structure. But a few words of caution generally. Do not deviate from the plans insofar as configuration and airframe are concerned. Scale markings are optional with the builder, but we suggest the cockpit details be duplicated. This will win you many points. As this is a good sized model, much care should be used in the selection of balsa. We use Sig wood and ours was a standard order, not hand picked. The finished P-40 weighed in at 46 oz ready to fly, less fuel. 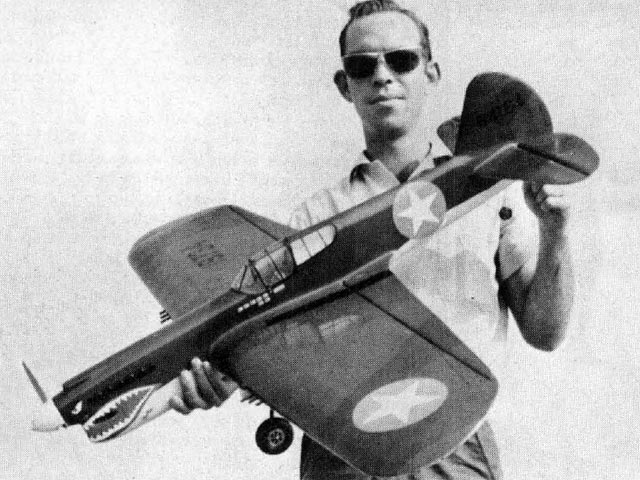