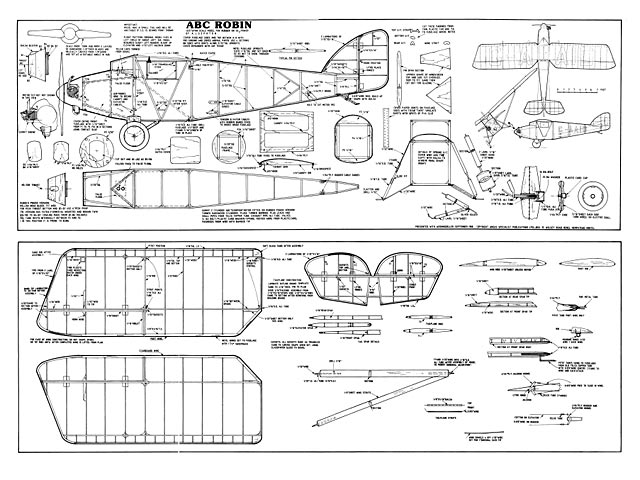 A COUPLE of years ago, while looking through some copies of Aeroplane Monthly, I spotted this pretty little craft hiding in an article on British Pre-War Ultra-Lights. One look convinced me that I had to build the machine; what I didn't realise at the time was that it would take nearly three years to get the beast into the air. However, it was completed in time for the 1988 Indoor Scale Champs at Alumwell, where it surpassed all my expectations by coming first in Open Rubber and third in CO2!

The model flies quite well on rubber power and with a Brown Twin up front. I see no reason why a Telco could not be used provided that the weight does not exceed about two ounces. Bear in mind, though, that there will be little power in reserve with this motor and icing-up may present a problem if the model is flown in a hall full of 'sweaty bodies'! Duration on rubber is between 17 and 20 seconds from an ROG; and with Brown Twin power, about 25 seconds may be achieved with a gas charge in a 6 cc tank, again from an ROG.

One final warning before you start on this project. The tailplane is minute at only 15% (approx) wing area, and the tail moment is small. The model is stable with the rigging shown on the plan (wing at +5 degrees incidence and tail at -1). Provided that the CG is not allowed to stray behind the point shown and your building is light and accurate, all will be well. My model required an 18gm nose block on a model of 65gms total weight.

Robin research: Finding details of the prototype sufficient to build a competition class model became my major headache for several months. A three-view appeared quickly, discovered in Flight of May 30, 1929, page 442. Whoever said 'there is no such thing as an accurate drawing of an aircraft' must have seen this one; I had to draw my own! Needing amendment were the spinner, cowl shape, windscreen, windows, strut ends, wing roots, tail skid, fin shape and elevator shape.

The second problem was a little less apparent. Only one full-size Robin was built. After test flights, several modifications was made, mainly to improve stability. These included raising the line of the rear longeron, increased fin/rudder size and exposure of fuel filler caps by moving the windscreen back. In spite of an extensive search, I can find pictures only of the right side of the first version (which call Robin 1), and pictures only of the left side of the second (Robin 2). As the fine detail, such as cable guides and the lettering is different on each version, I made my first assumption: that each machine was built and coloured symmetrically.

The third block to stumble over was colouring! Aeroplane Monthly and Flight state the scheme as 'orange and black'. That holds good for most of the machine, but what colour is the cowling, and what about the vertical and horizontal tapes on the fuselage sides? More assumptions: how about silver dope for the tapes and natural, matt aluminium for the cowl? A picture of the aircraft in Aeroplane shows turnings on the cowl: I can't find other evidence of this in the many photographs picture was taken at Olympia 1929, I've ignored it as a one-off.

Hurdle number four was the wing lettering, solved by close study of photographs of 'Robin 2' on page 1227 of Flight, November 15, 1929 assuming of course that the second version is identical to the first in the wing department! The photos on this page also show slight sweepback; thus hurdle number five was negotiated.

The final research problem was motor detail. This was solved by a study of photographs and a two-view in Flight. It was only after the model was completed that I realised that Shuttleworth's DH Humming Bird is also powered by the ABC Scorpion; so now you know where to get your detail!

Model gen: I made the Robin as accurately as I could, but after the redrawing of the three-view, a debrief with the judges at Alumwell and a chat with Doug McHard and Doug Sheppard (who kindly gave the model and documentation the once over at the RAFMAA Champs), several errors were highlighted. Amazing how one can study a machine for a couple of years and not see the obvious! Anyway, save for the thickness of the wing, I've corrected what I can on the plan.

For reference, the main differences are: section size at former F2 reduced, fin shape, position of rocker arms, hatch size, strut to fuselage position and side window size changed. In addition, the thickness of B7 has been increased from 1/64 in to 1/16 in as the former (pun intended) was too weak.

The model's aerofoil is Gottingen 795, a section with a good lift/drag ratio at low Reynolds Number - essential for good flight qualities on Indoor scale models. The disadvantage: the wing is thin. Alter it at your own risk, but if you do I would be very interested in the result - especially if you also move the CG back.

Structural secrets: There are only two unconventional methods used in the construction of the model; silver soldering and airmail paper fuselage covering. A word on each is probably in order, but consider them as similar to moulding canopies: out of the question until you try; then every model must feature it somewhere!

I used silver solder on the undercarriage to achieve a permanent joint with the minimum of material. Many heavy landings have since proved the worth of the minimal extra effort involved. The airmail paper proved an excellent simulation of plywood, and it's easier than tissue to apply. I used Boots own brand paper, taped it to a sheet of wood, water shrank it and gave it two spray coats of 70/30 thinned banana oil (that's non-shrinking dope with plasticiser, to the uninitiated). Tissue paste pulled it onto the wood and simulated the edge tapes quite nicely. Joints were covered with tissue strips as per the prototype after simulating the rivets (or whatever they are) with small drops of PVA. Give the method a try, you.may be pleasantly surprised!

Use good quality light balsa; not soft blotting-paper grade, just good lightweight stock. The lightest you can find must be used for the tail; be sure to match stiff stringers for the fuselage. I used balsa cement and Ambroid (when I could get it) as adhesive; both are adequate for the job. Stay away from cyano for the balsa structure - it stiffens the wood too much, makes a weak point at the edge, and joints are set forever. If you want to change a balsa cement joint, it only requires a few drops of thinners to melt it, and extra cement to rejoin. Have you considered carrying an old nail varnish bottle of thinners in your field kit? Perfect for field changes that require melting of joints, and it provides an instantly available dope brush for field repairs to tissue.

The basic construction is straightforward, and needs no detailed instruction. Try not to put any pins through the wood; instead, use small scrap balsa pieces to hold components in place.

Do as much finishing as you can during construction. For example, the laminated tips should be sanded and shaped before fitting, and the fuselage sides may be smoothed before joining. Try to blend in all the gussets. This provides a lighter joint which is stronger in the long run than the traditional triangular gusset. The latter gives a stress point at the joint.

The only components which may cause heartache are the small parts of the Scorpion motor. I used bamboo skewers and turned them to shape at low speed in a Minicraft Drill. The turning tool was a good quality Swiss needle file, which required no formal tool support. The drill is held on the bench with one hand and the file is held in the other. If the drill speed is set to a minimum, or just above it, spark plugs and push rods are a joy to produce! The main cylinder was turned from dowel in the same way, and old Telco copper tubing was used for the plug leads. The rest of the detail is on the plan. It remains only to add sanding sealer and Humbrol Metalcoat to complete the job.

As detailed, the undercarriage is lightly sprung (if you have put the cyano in the correct place). Make the effort to achieve the springing, as the landings will have less bounce and will thus gain more marks in competition! It's also worth making the effort to retain the knock-apart structure and the removable wheels. Both will facilitate transport, and the former will avoid serious damage in the inevitable crash. In fact, during trimming flights the original hit a hangar wall head on, at full flying speed, with no damage.

Covering and finishing: Cover the machine with Jap tissue, using dope to attach it to the frame. Tissue paste pulls the tissue hard into the wood, giving the wrong effect. Water shrink, jigging the components to the board with scrap balsa blocks, and when dry, remove-and spray with one coat of 75/25% thinned banana oil. Again, jig to board to dry and a stable, warp free frame should result.

Note that there is no twist on the wing, washin and washout being achieved with the moving surfaces. The original was sprayed with thinned colour dope, using Frisk Film to mask the lettering. A thin spray of photo-mount adhesive was required on the back of the film to ensure adhesion.

Assembly and trimming: Initial test flights were made with the tail held on by thin rubber, the canopy simulated with masking tape and the struts removed. At the meeting in question, one modeller commented that the model looked a bit old. I was quite insulted! Anyway, it saved damage to the machine in trimming and the tail remained attached with thin bands until a few days before the Champs." 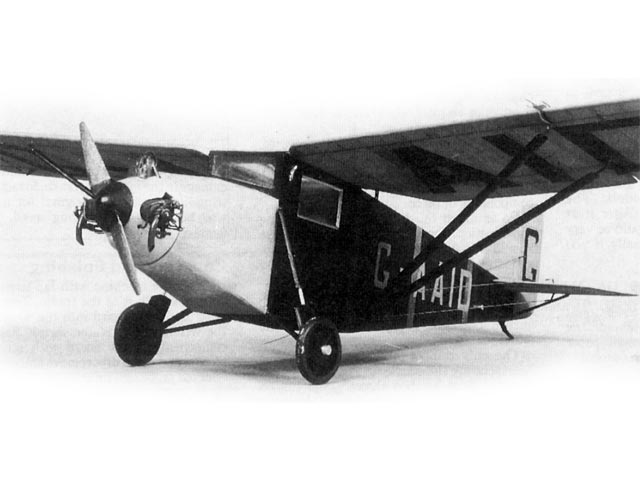