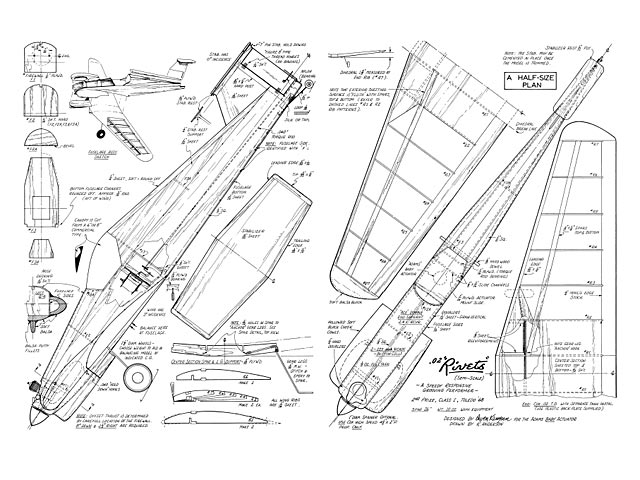 Rivets. Scale pylon racer for single channel R/C and .020 power. American Aircraft Modeler, July 1969. The plan was published at half-size, here it has been enlarged to full-size.

Quote: "Sweeping by in a high-G pylon turn, the Rivets heads for the straight. Perhaps it is not really going 100 mph, but it sure looks like it! Tiny rudder-only version of great Formula-1 pylon racing plane is fast, groovy, and responsive. Rivets, by Pwen Kampen.

THINK small! Until recently the size of an R/C model was dictated by the size and weight of its electronic payload. Now with the availability of systems in the 3-ounce or less range, many small models are pos-sible. Rivets is one. True to its prototype, it is small in size but not in performance. It's a mover, fast and responsive, not for slow reflexes and definitely not for the novice.

In this day of big displacement engines, the tiny Cox TD .02 powerhouse tends to be regarded as a cute novelty. Don't be misled for this engine-airframe combination can create plenty of excitement on rudder only. While fast, it is also honest, a groover in the turns, with a flat power-off glide when properly trimmed and balanced.

When designing small planes I have tended to avoid a low-wing configuration for rudder-only use as the need for exces-sive dihedral tends to destroy scale-like appearance. Being aware of the fact that a sharply racked-back leading edge con-tributes to dihedral effect I have long considered Rivets as a possible answer.

The T-tail effect was also something I wished to learn more about. It seemed ideal for permitting uninterrupted airflow to the rudder, rather important when that's all you've got. Flight performance has borne this out as this little one really reacts to a command.

Not wanting to re-invent the wheel, use was made of many photos and drawings, and a special kudo is due Joe Foster for his unknowing contribution. The small one was completed shortly before the '68 Mid-winter Toledo Conference and there received considerable interest from spectators and judges alike.

Surrounded by large ambitious projects, the little Rivets seemed lost but before long it became apparent that it possessed a special appeal. For reasons still not clear, everyone wanted to touch, pet,- bounce and hold it. I had thoughts of renaming it 'Cuddles'.

Rivets claimed a victory and came home with an award half as large as itself and all was well except for a nagging doubt. Would the cute thing fly? Well, it almost didn't.

Early attempts with Dick Adams at the controls were borderline at best and at times almost disastrous. Behavior was erratic and at least 150 feet were necessary for recovery from steep spiral dives. One session was enough and Rivets was retired to a hook on the wall - head down in disgrace. I salvaged my damaged pride with the philosophical observation that you can't win 'em all. It was Rivets' first defeat. For several weeks other projects took priority and Rivets was allowed to gather dust.

All would have ended there had it not been for a visit from Carl Goldberg. After giving his usual fine talk and demonstrations for a record MARCS turnout, we spent a delightful evening together. At one point attention turned to the 'hung up' Rivets and its failure to perform. Carl looked things over and then chided me for giving up so easily - for not accepting the challenge of the designers' art. His words really reached me and, feeling a little ashamed, I went back to problem solving...."

Update 20/10/2016: Added a PDFvector format version of this plan (CAD redrawn) thanks to rchopper56.

Quote: "Hi Steve and Mary, This my CAD version of the Kampton .020 Rivets. It was first released in 2005 as a 8 page tiled file at Dave Fritzke's web site. Today, I joined all original 8 pages for those who would rather have a one complete picture of this pretty model. The first page of this file is the combined tiles. The remaining 8 pages are the original tiles. Enjoy. Gene" 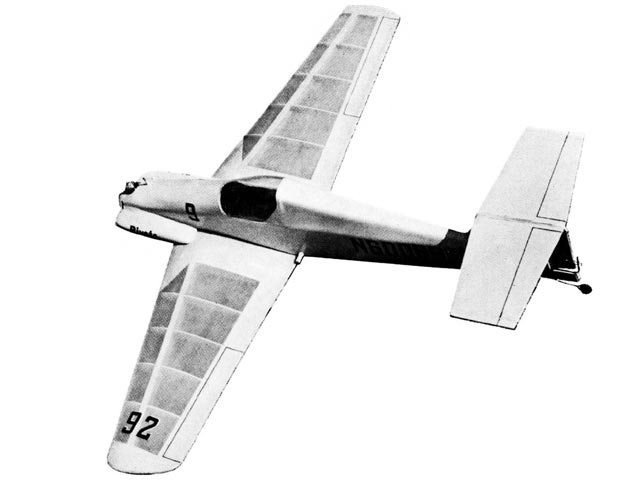 I downloaded this plan to convert and build a profile control line entry for the 2015 Cox Reed Speed Event. I shrunk the plans to build a plane with a 15in wingspan and powered with a Cox .020 engine. I can send pictures if you would like to see a product of your labor. It was a great set of plans and the plane essentially flew right off the board. Thank you!
JimCarter - 29/07/2015
Add a comment