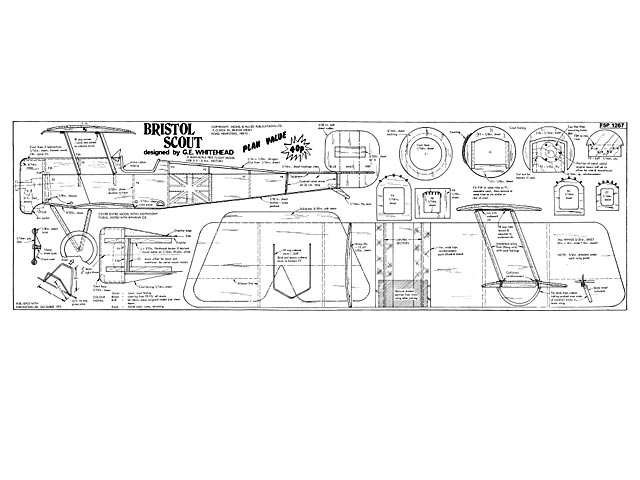 Quote: "THERE ARE, or have been, so many attractive full sized aircraft that when the scale modeller is looking for inspiration, very often he is spoilt for choice. If, like myself, you enjoy R/C scale, it is a most frustrating thought that it is impossible for one person to make even a fraction of the models he would like to, in the available time. In an effort to get some of the most attractive planes out of my system, I hit upon the free-flight all-sheet idea, as represented by my previously published Nieuport II (oz5656) and the Bristol Scout portrayed here. Construction time is minimal while cost, even by today's standards, is low, and flying pleasure so far has been infinite.

At the 1973 Nats, where I flew the Bristol in the calm evenings, I counted no fewer than three Nieuports built from my plan. If a few of you build the Bristol - or, more importantly are encouraged to sit down and draw up your own plans in the same vein, perhaps we could have our own all-sheet scale class at the Nats!

For the uninitiated, the Bristol Scout was one of the higher performance Scouts used by the Royal Flying Corps during the early part of World War I, and like the Sopwith Tabloid (another 'sitter' for the all-sheet treatment) was developed from a pre-war racing machine. It was not long before the Bullet, as it became affectionately known, was armed with a variety of guns, but the absence of a suitable interrupter gear meant that most of the arrangements for fire-power were home-made. This did not prevent Major LG Hawker from gaining the Victoria Cross for shooting down three enemy machines in one combat. I could not locate a photo of his machine, but a description in Profile No 139 indicates a mounting as shown in the photos of my model.

Construction: Firstly the fuselage - your engine will decide your engine mounting method, although I would recommend radial mounting for simplicity. However, since two bits of hardwood and a scrap of aluminium is about one tenth of the cost of a metal mount for a DC Dart etc, a suggested beam mount is shown on the plan. After cutting out all parts, glue the fuselage doublers to the sides, and F1 to F1B, using an impact adhesive. Next, glue together the sides F1, F2 and F4 and allow to dry, ensuring squareness. Join the tail end and add the remaining formers. Bind and cement the cabane struts to the formers F3, then add F3A and cement to the fuselage.

The front decking and cowl is assembled as follows, having first made card templates as necessary (use bent sheet — do not plank as this is heavy and takes a lot of sanding). Cover from F3A to F5 in one piece, then the top decking from F1 to F3A, followed by the two side pieces from F1 to F3A. The cowl front is detailed on the plan, and is only added after engine installation is finalised. Add the bottom sheeting and stringers then cut out the cockpit aperture and sand smooth.

The wings are simply made by butt-joining 2 and 3 inch wide sheets together and cutting to shape. The rib positions are marked, the sheets steamed to a curve, then the ribs glued and pinned to them - the whole being pinned to the building board until quite dry. Now separate the centre sections, rejoin to the wings at the correct dihedral angle and add reinforcing tape. Sand all edges round and remove the lower wing cut-out.

Both the tailplane and rudder can be cut from light sheet, as shown on the plan, or assembled from stripwood. I tried both, and found that the built-up structure, covered, doped and fuel proofed only weighed as much as the sheet structure before the latter was even doped. if you are using a Cox Pee-Wee for power, then use the built-up method - a heavier motor will be able to use the simpler sheet method.

Finishing: Lightweight Modelspan tissue is banana-oiled onto all sheet areas and sanded well. Simulated metal panels can have a coat of sanding sealer before the silver is added. I think that the buff colour of clear-doped wood is attractive, so to save weight did not paint the model all over. The Union Jack needed a fair amount of care, patience and adhesive tape, but adds immensely to the character of the model and is well worth a try. When painted to your liking and fuel proofed, finish the struts, add the gun, and pray for calm weather.

Flying: Check the centre of gravity and add lead to balance as necessary. The prototype weighed about 9 oz including lead, and used a 5 x 3 propeller fastened to a Cox Pee-Wee engine running on Keil Kraft Nitrex 15 fuel. A celluloid trim tab stuck to the lower right hand wing trailing edge enabled warps to be counter-acted, and a left hand glide from a hand launch is the first requirement. Under power, use rudder to adjust for left-hand circles.

The original climbs quite slowly in wide left-hand circles, and after a two minute run on a full tank reaches only 200 feet altitude after which, its reconnaisance completed, it glides gently to earth ready for another flight." 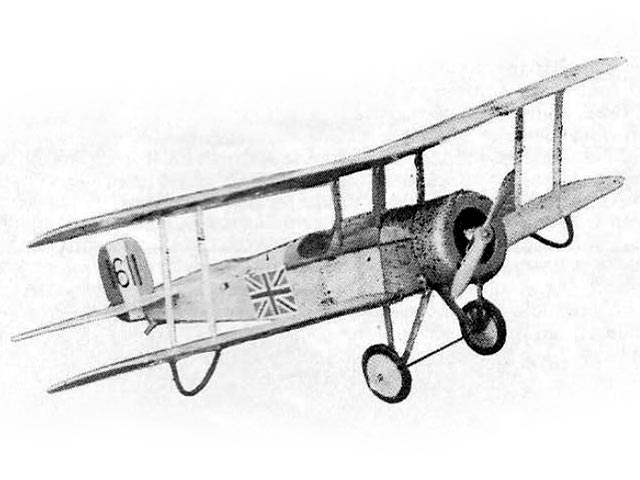