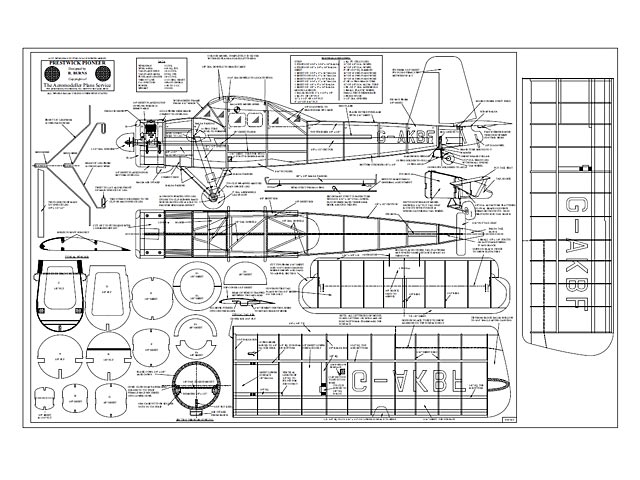 Quote: "THE 'Pioneer' is a natural flying scale model, of high wing layout, yet with enough unusual items to he distinctive. So far only a prototype exists, and that has been the subject of numerous development changes which makes it difficult to be sure that the final version will be the same as the one from which this model was built.

In fact, the cabin interior is 'freelance', as no details could be obtained apart from the number of seats. There have been several Service, civil and ambulance layouts tried, front two or three seats plus radio, to only one scat plus ballast, so that some doubt is excusable. The prototype has been flown with various dihedral angles and at least three fin shapes, so that if you are able to check with a later edition, you may find yet another change. One item which is noticed in the flight pictures of the Pioneer is that the undercarriage seems longer than that on the model, but this is due to the very long travel of the oleos, the wheel being more than a foot lower in flight than on the tarmac, when the model length is correct. It is reported that when the engine is run up, the Pioneer rises quite a bit on the oleos, which must be quite a sight.

Producing a flying scale model is a matter of having the right size and weight for the engine to be fitted, and the size of a 1/12th scale model being 52 inches span, it was decided that a Kestrel 1.9 cc should be used, which gives around 22 ounces static thrust. This would require the weight of the model to be 32 ounces or so, and heavy construction was used to bring the weight up to that figure, which was exactly reached. This heavy weight gives a fairly fast model and a strong nose on the fuselage while safety wing and tail fixings were decided on, to absorb the bumps. This worked out very well, as the first few flights had very bad luck, such as hitting a tree and falling into a rocky river, but no damage resulted.

It would be easy to reduce weight to around 24 ounces, using balsa formers with thin ply facings for the first two, and a size smaller in wing spars, and sanding the fuselage covering down a bit more, covering with thin tissue in place of bamboo paper, and using light wheels. This would ailow a good 1 cc engine to fly the model, especially if the cabin interior is left rindetailed. Any modern 1.49 would take the original weight with ease..."

Quote: "So next up then is the Prestwick Pioneer. A 1/12th scale free flight model designed by Robert Burns. A good sized model (52 inch wingspan) and using, in its original configuration, a 1.5 to 2 cc motor. It screams out for RC and as for electric, I'll let others decide, being a motor head man myself. Once again if using my drawings please take care, measure twice, mark, measure again and cut. They are only tracings from the original blown up magazine scans." 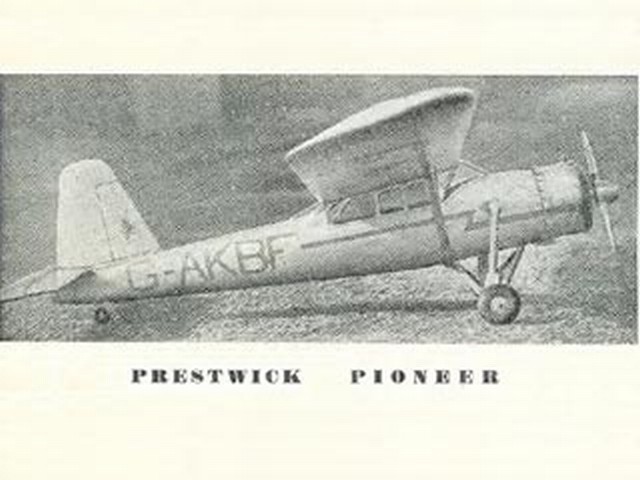