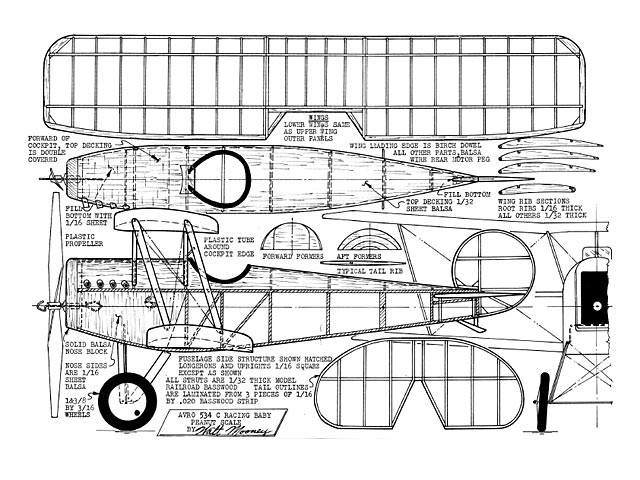 Quote: "THIS RACER, built by Avro in 1921, was ill fated: it never did actually race, but crashed into the water following a power failure. Several other versions of the Baby were built, but this particular one was selected for a 'Peanut' as it had the shortest wing span of any. Its proportions are just about ideal for a rubber-powered model, with one exception - its nose is rather short, so it is really important to keep the tail light.

The model has all the standard components of an early '20s biplane. It utilises standard building techniques throughout, with the possible exception of surface outlines, if you are so inclined. Scale rib spacing is employed, but the leading edge riblets of the full-scale aircraft were omitted. Wheels manufactured by Fulton Hungerford were used, and these are truly beautiful. However, the model shown required quite a bit of nose ballast, so hardwood or plastic wheels are recommended.

The surface outlines can all be made in the fashion shown on the wing plan. Cut them out of sheet balsa to the shape shown, which will require four to five pieces for the rudder, and as many as eight or ten for the horizontal tail. The technique is familiar to anyone who has ever built a model. Or the surface outlines can all be laminated out of thin strips of model railroad basswood. This results in outlines which look much nearer true scale. Actually, the model illustrated even has the wing outline made of basswood laminations. If basswood is not available, thin balsa strips can be used for laminations, but basswood is easier to work with as it can be bent around curves formed by pins without wetting. Balsa will require soaking in water and bending around a card or balsa former to prevent cracking. This might even be almost impossible at the trailing edge of the wing tips. If you are limited to balsa, making the wing outlines as drawn is recommended..." 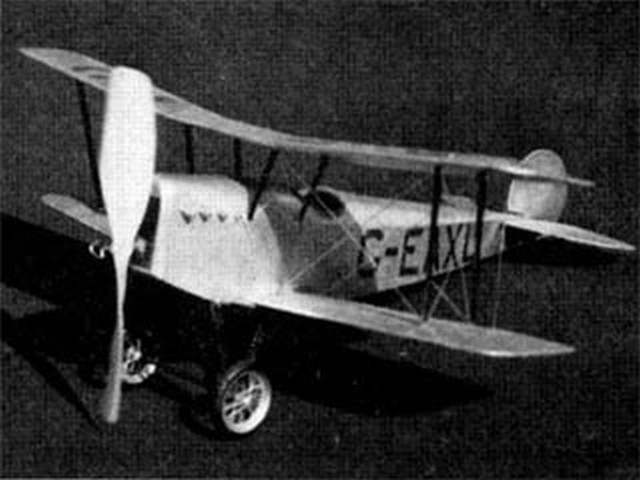