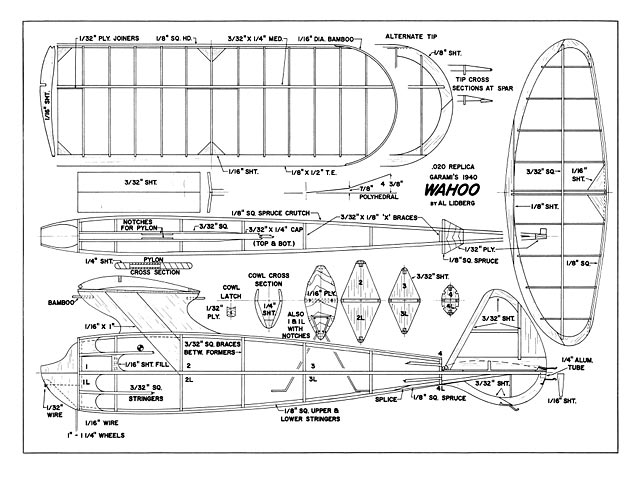 The original Wahoo was a Lou Garami design and dates from 1940. This is a modern redrawn version by Al Lidberg for .020 power, from Model Airplane News issue 03-81.

Quote: "Wahoo; an unusual name for a model, perhaps, but once you see the model fly, you may also want to express enthusiasm! The original 1940 WAHOO was a product of Louis Garami, a designer noted for his originality and especially for his use of the Atom .09 engine. As an .09 ignition model, the WAHOO spanned 33in and carried the required coil, condenser and batteries. As a result, its total weight and wing loading were quite different from what we might see today for the same sized engine.

Based on the fine performance of my .020 Rocketeer 'A,' I scaled the WAHOO down about 10% to approximately 150 square inches. The resulting model makes a fine addition to anyone's contest stable, although it is stable and non-critical enough to be a great sport model.

The .020 replicas are good models for small flying fields, such as a park (with few trees, please) or a large ball field. For those of you interested in the contest potential of this design, it has no trouble with ROGs or full power flights. During flight testing I ran some Aldrich 1/2A 65% Magnum fuel in the TD .020. No bad tendencies were observed as the WAHOO just climbed higher and faster.

The fuselage for the WAHOO is based on a crutch formed of 1/8in sq. This type of construction is typical of early power models and may take a bit of getting used to for modelers accustomed to sheet-balsa-sided boxes. Because of the stresses current models encounter from dethermalized landings, I chose to use spruce for the main crutch members..." 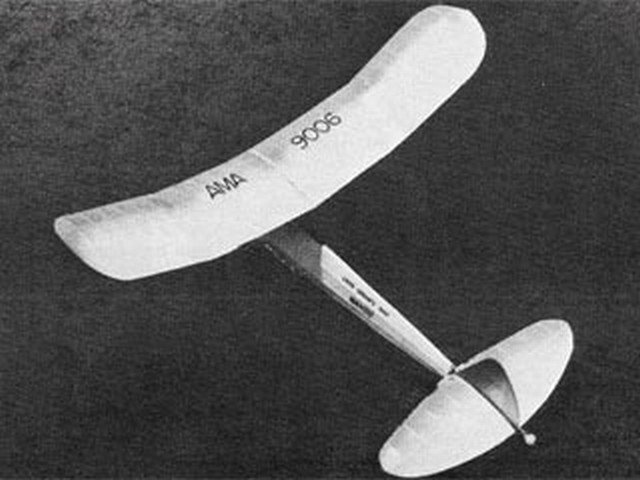