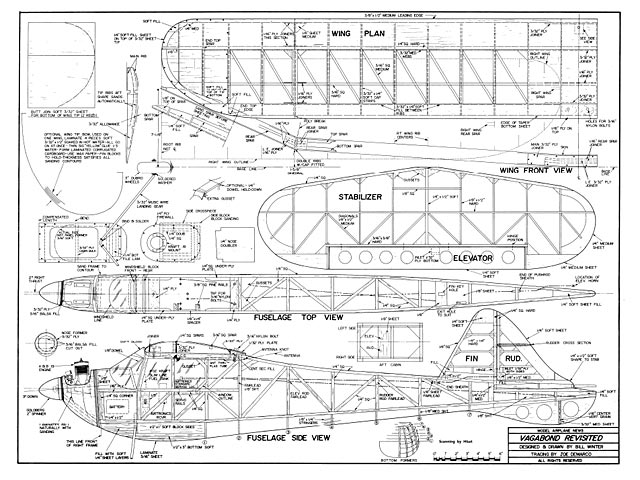 Vagabond Revisited. A modern interpretation of the Vagabond design, originally a FF design from Air Trails in 1942. This version of the plan is from the 1980s and is for RC and a K&B .19 engine. Span 75in, Area 651 sqin, length 50in, Power .19 engines.

Quote: "VAGABOND a 'nearly' old-timer that could teach you a great deal about flight and flying! Interesting design from the Forties.

To understand old-timer models you have to think of them as children. If you are an old-timer who has published perhaps 100 airplanes ranging from rubber scale and originals, Wakefields, stunt, free flight to numerous R/Cs, you know these things are children. Not only do they vary in looks and in fortune just like the kids in any large family, but the most unlikely ones somehow acquire their own aura of destiny. A virtually forgotten 'one that got away' comes home a generation later, its fortune made.

The Vagabond (oz8196) was doodled behind a closed door at Air Trails while the outer office was in chaos meeting 'our' deadline. Since it was a doodle it had to look spiffy. We sculptured a forward vertical tail with sweeping curves, an exotic ventral fin, a deep curved belly calling for formers and stringers under a box - we were thinking of Mr Mulligan at the time - and, of course, an inverted fully-cowled engine. It was only a doodle, for heaven's sake! Doodling plays the percentages: you can get lucky, like winning the Irish Sweepstakes. This thing has a life of its own.

We are duty-bound to tell you that Air Trails had the biggest, and one of the best staffs that ever came down the pike. Among these capable characters were other doodlers who were, unlike us, blood-thirsty competition types. Bill Tyler, an indoor master, is still very much on the scene - he typically does not bother to turn in results. And the late Ed Yulke, an engineer at Republic whom we enticed to do 'something worthwhile' (that is, join the fun at Air Trails), and Walt Schroder. Without Walt many of these beautiful things would not have happened. We'd doodle and he'd insist - You've got to build it. Oblivious to our moans and groans, he stood over us while we made the Vagabond, the WOG, and so many others. He'd then say, 'Let's go fly'. And he, not us, would have a ball flight testin. Walt became president of a now-gone company, Eagle, and it escapes us why he kitted the Vagabond.

While not authenticated by SAM because we can't pin down that December 1 1942 deadline, it quickly proved to be a highly competitive ship at 6 ft on an Ohlsson 60. (It was published in Air Trails with plans by Lorne Williams, and in an English special annual in 1948.) At Wichita in 1946, it seemed to have beaten the Sailplane in Class C on two flights, and the chap went home with the trophy. But Davis, a Californian, put up a late after-noon third flight which eked out a better total, and the Vagabond guy was told to return the trophy.

In 1950, George Trammel missed by an eyelash winning the R/C event at the 1950 Dallas Nats. George's Vagabond had a slow pulse-rate elevator as well as rudder (it flew that way, too), when escapement/rudder was king (guys such as Walker, Sigfried and Rockwood had super stuff). He was running away with the meet, when some klutz tripped over a power lead - some systems looked like TV coverage equipment - and George, out a quarter mile, displayed the most exciting aerobatics imaginable... until the concrete rose up to smite him. (Foxworthy won, George was third.) Now, if we ever had a modeling disappointment, that Vagabond had to be it. How nice if it could have been a Nats Class C free-flight and an R/C winner.

The "doodle" had no vices. One didn't even adjust it, except for the ABC stuff of balance and trim. No offsets, no twists. It did not wind in, that is spiral dive, a bane of existence in those days. People said it was forgiving. To crash, you had to work at it..." 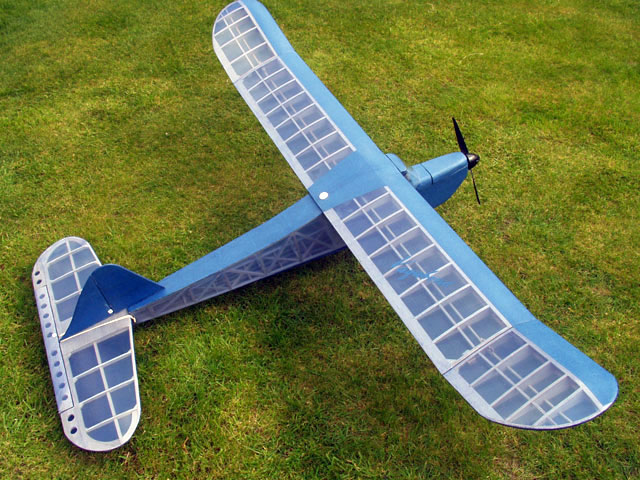 Hello Steve and Mary, I have attached photos of my recent build - Bill Winter's Vagabond - for your gallery [model photo & more pics 005-008]. It's a great looking model and flies a real treat. Details of the 75" span model are in my brief build log here: www.rcgroups.com/forums/showth.... Youtube video of maiden flight here (flew off the proverbial building board !! ): www.youtube.com/watch. Regards and many thanks for your sterling work.
John38 - 01/05/2017
Hello Steve and Mary, I attached some photos of my Vagabond scaled up 150% from 75 to 112 inch span [more pics 009-012]. Covered in doped polyester chiffon over mylar type film, it flies a treat. Build is similar to my earlier Vagabond and is detailed in my blog in RCGroups. Video of the maiden flight in blustery conditions is here: https://www.youtube.com/watch?v=oS758KRCXII.
john38 - 24/08/2019
Add a comment