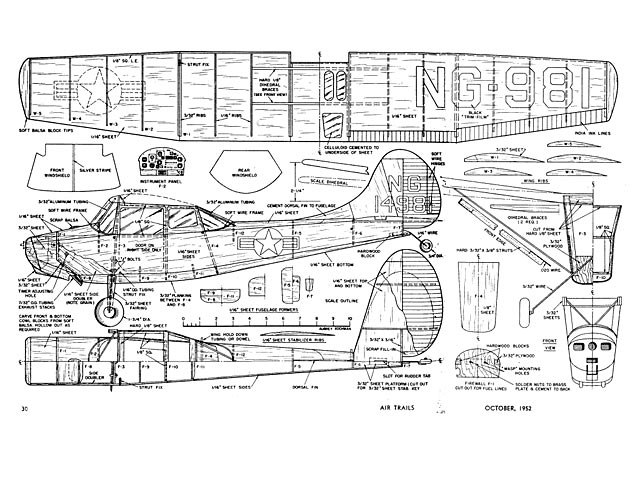 Quote: "Cessna L-19 Bird Dog. Has The Half-A flying scale bug gotcha? Then what better project could you try than this beauty?

During the fall of 1949, the Air Force and the Army worked out a set of specifications for a new and improved liaison airplane. Several leading aircraft manufacturers entered into competition to design an airplane that Would fulfill these specifications; the Cessna 305 was the winner.

Deliveries of this model in quantity were made in the fall of 1950 with the Army designating it their L-19. On duty in combat areas six to ten hours every day, this flexible observer has proved itself tops for 'flushing' enemy troops, hence the nickname Bird Dog.

The Bird Dog is an all-metal airplane with a 36 ft wingspan and is powered by a 213 hp engine. It has a maximum speed of 146 mph and an observation speed of only 46 mph.

The model presented herewith is scaled one inch to the foot directly from factory-supplied drawings. However, in order to improve lateral stability and all-around performance, the dihedral angle and stabilizer area have been slightly increased. Control line scale fans should follow the scale stab and dihedral - as per dotted lines on plan.

In keeping with the all-metal construction of the Bird Dog, our model is constructed primarily of 1/16 in sheet balsa. Light weight being a prime requisite of any successful Half-A flying scale model has more or less dictated that the finished model be patterned after the National Guard's polished aluminum finish with dark green anti-glare panels. The olive drab paint job as used by the Army and the Marines would require considerably more applications of colored dope, and therefore add weight, to achieve the same finishing results as can be had with two or three coats of aluminum dope.

Start construction of the fuselage by cutting the sides and formers to shape. Notice that former F-3 is built up and includes the plywood landing gear mount which should be drilled for the 'J' bolts before assembly is begun. Mark the former locations on the inside of both side pieces and cement the side doubler sheets to the sides between F-1 and F-3. Assemble the sides by first cementing F-3 and F-4 in place..." 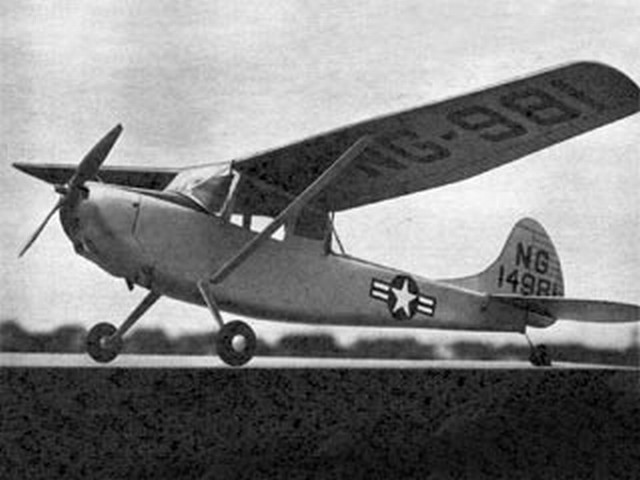