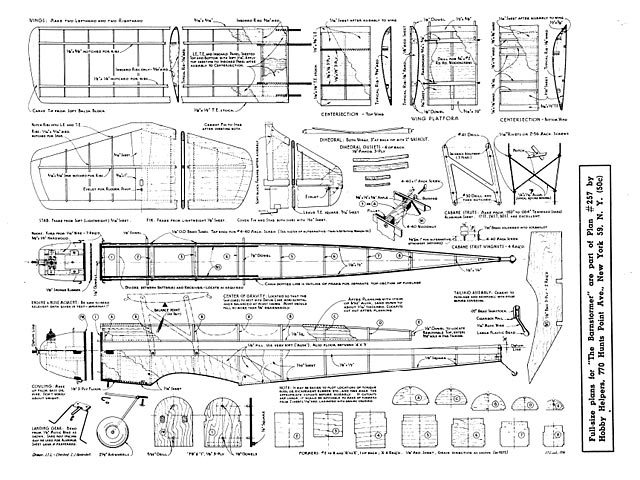 This little biplane was first designed as a Free-Flight nearly 10 years ago. Since then it has undergone constant develop-ment until, in its present R/C form, Barnstormer gives a performance equal to that of the best. A safe, relaxing airplane to fly and yet no slouch in maneuvering either. In over 25 years of designing and building model airplanes, this is the one to which I point with greatest pride.

Construction: Proceed according to the standard practice of building the lower part of fuselage, upside down, over the plan and then building the removable top directly on the completed lower half to assure a perfect fit. Note the following before construction begins.

1. Plan R/C layout carefully in order to concentrate all weight as far forward as possible. Re-locate front formers, if necessary, to suit a particular installation and read the remarks on nose length under flight testing.

2. Cabane strut structure must be sawed out of strong aluminum sheet .040 to .064 thick. Best way to assure material of adequate strength is to specify 'Tempered' or 'Hard' sheet. Such alloys are usually designated by the letter T or H after the alloy number.

3. Do not cement stab to fuselage until after flight testing. A few spots of cement will tack the stab in position until the exact incidence has been determined. Some builders would rather leave the stab separate. This is quite practical and calls only for the addition of appropriate dowels for the rubber hands.

4. CG location is only critical in terms of optimum performance. Try to balance the ship at the point shown, or ahead of it.

Glide Testing: Fortunately quite easy because of the light wing loading. 10 to 14 ounces per square foot being about the range between light and heavy builders.

Without upsetting the general relationships of flying surface incidences, aim for a steady and definite downward glide. Because of the light loading, study the glide carefully. What may appear as floating could be, in fact, the desired glide angle. The model has a lower stalling speed than most orthodox designs and there is little sense in trimming out this asset in favor of an unnecessarily fast glide. It is again stressed that while the exact degree of positive decalage (when lower wing has greater incidence than top wing, the decalage is positive) is established empirically, for best results it must still be positive. Similarly, longitudinal dihedral must be as generous as possible..." 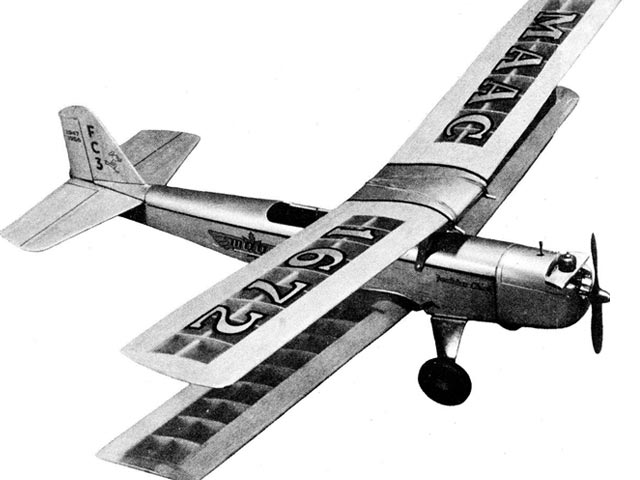