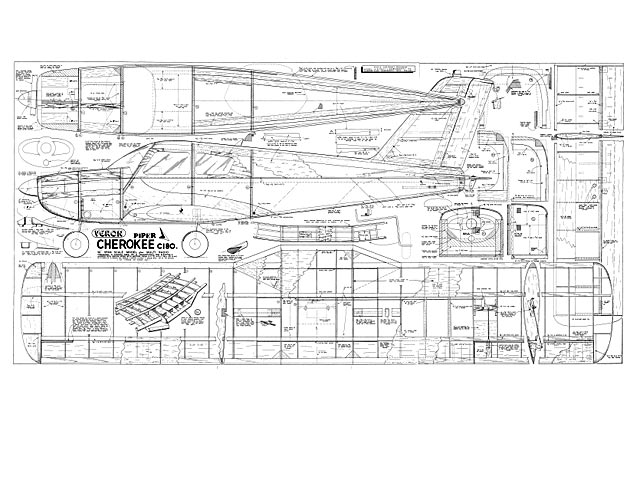 Veron Piper Cherokee C180. Radio control model. Sadly no printwood with this one.

Quote: "All Veron fans have been waiting for us to turn out a low wing scale for radio... We couldn't find a better choice than this! Designed for intermediate (3 channel propo or 6 reed) giving ailerons, elevator and engine speed and up to full house (4 propo or 10 reed) with rudder ...Super kit has many pre-fabbed parts. Die cut balsa ribs and ply. Formers. Preformed coil springs nose strut and main U/C. Sponge rubber wheels fitted with new nyloin scale hubs. All fittings. Transfers. Full plans and instructions. Spinner and hardware."

Quote: "The plane on the cover, Veron's Cherokee, built and flown by Charles Toms.

I AM NOT a particularly good pilot, but have always chosen - against the best advice- awkward or 'hairy' models, such as some scale types, Cessnas, Shoestrings, or deltas, rather than easy-to-fly models. So, still sticking to scale, I decided to try my hand at Veron's latest offering, the Piper Cherokee as, judging by the low-speed stall characteristics and stability of the real aircraft, I felt it should give me more relaxed flying for a change.

The Veron version is a very near-to-scale model of this, one of America's most popular four-seat light sport planes, and has been designed to a wingspan of 56 in. This gives an overall area adequate to carry three-function proportional radio gear (or 6 channel reeds), for aileron, elevator and engine-speed controls. With mini-propo gear, rudder may be added, if desired.

The testing and development of the original prototype model, pictured on the box label, was carried out with a .19 motor and the full flying weight was 54 lbs. (13-1/2 oz of which was accounted for by the 3-function propo gear). This, with 560 sq projected area, gives a loading of approximately 22 oz/sq ft. The form drag of the bulky fuselage, together with a fairly deep, semi-symmetrical, high lift aerofoil section, produces a very true-to-scale flying speed, combined with excellent stability. The model is, however, not recommended to beginners to radio control - especially when fitted, as mine is, with a 40 motor! Neither is it recommended for rudder-only or even rudder/elevator systems. Ailerons are a must.

Needless to say, any radio gear operating with all-up weights of 30 oz or so, is 'out.' Only fully transistorised, 'miniaturised' or micro-logic circuitry outfits, with airborne weights of not more than 16 oz should be used.

The kit: The relatively small size of the box is deceptive, as there is a tremendous amount of material packed into it. As well as shaped and die-cut sheets, there are copious supplies of 1/16 sheet for covering, spindle-moulded cowl parts, ready cut 3/8 ply cowl front, engine bearer plate and other items, as well as innumerable small shaped pieces of balsa. The stripwood is of nice quality, neatly bundled, together with the formed and notched leading edge pieces. Cabin sides are ready cut from ply and, right at the bottom of the box, are three large sheets of die-cut ply doublers, formers, dihedral braces and the like. (The die-cutting, though crisp, did not go all the way through, and the parts had to be helped out with considerable knife-assistance). The die-cut balsa ribs, on the other hand, all came away very easily.

The plan, though perhaps a little crowded, is nevertheless quite clear and includes many detail sketches of the less obvious items. It is supplemented by a folder giving a sequence of constructional perspective views of assembly, in the usual wonderfully graphic Veron manner, and a 6-page textual instruction folder.

Preliminaries: To start with, I decided to use an OS ringed .40 engine, which I already had, and my RCS Digi-Four, with all four servos - which has an airborne weight of some 15 oz. I checked for any modifications that might be necessary and found virtually none, apart from deciding to use a larger fuel tank, which would require larger cut-outs to be made in the bulkheads. I felt that fitting a steerable nose-wheel was desirable, and therefore decided to make a removable hatch at the bottom for access to this. I also decided to fix the tailplane permanently, as I do not like strap-on tailplanes - they can accidentally move and alter the trim of the model.

One must settle down with the plan spread out, and the two instruction folders, and very carefully sort out all the wood into separate groups, ie tailplane, wing, fuselage and fin. The wood is cut in differing lengths and widths for each component but not identified individually, as in some other kits.

Constructional pointers: I always build the wings first, so that they may be used to check the positioning and incidence as the fuselage is built and the adjustments, if called for, made to the fuselage during construction rather than when it is completed. I found it paid off to lay each wing half accurately on its supporting tip blocks, and get them anchored down firmly so that they did not move around while I was fixing the centre gussets which set the dihedral.

The diagonal portions of the leading edge need very careful attention, and must not be cut until one has sanded the shape over the outer section of the LE then cut a little over-size and cleaned off to get a perfect fit to the centre section. As this model was being fitted with a .40 engine, I sheeted the whole wing with 1/16 light balsa, covering the tips with 1/32 sheet. The tailplane and fin seem very flimsy and flex-ible during construction but, when fitted and covered, are quiteligid. My elevator strip came out twisted, somehow, but a little steam from the kettle did wonders in straightening this out.

Incidentally, one should not take it for granted that the cut-out in the fuselage for the tail-plane will come out at the correct incidence automatically - one may have made an error somewhere, so it is best to measure and mark out before cutting, using template supplied. This also applies to the wing, of course..."

Instructions (2 sheets, illustrated) thanks to Raul. 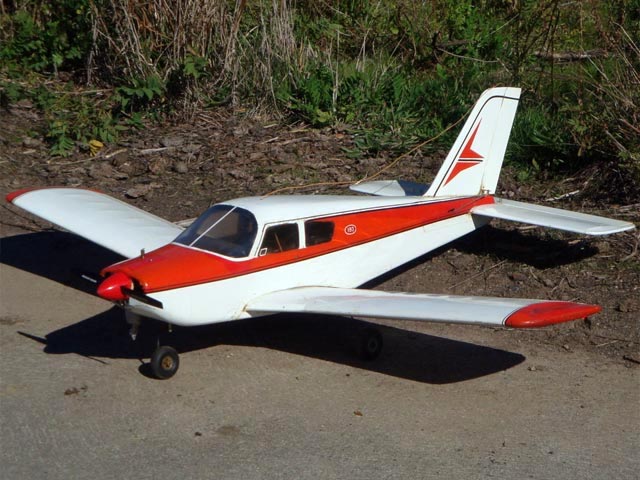