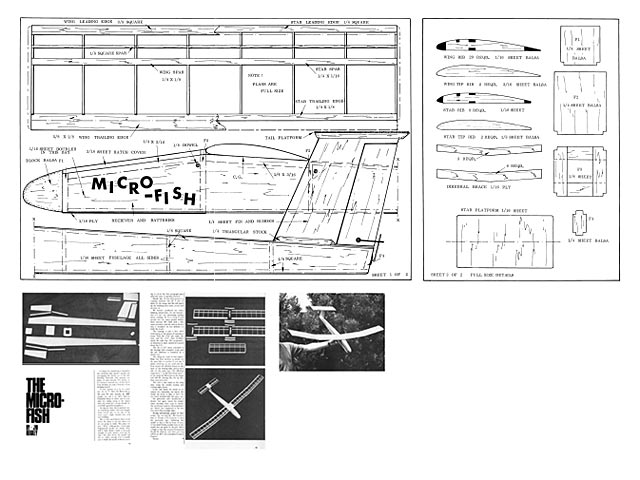 Micro Fish. Single channel RC glider. Dec 1970 RC Modeler. Simple design, the plan shows just one section of wing, you'll need 4 of those to build the complete polyhedral wing, then another fifth one for the tailplane.

Looking for something to build for the weekend that doesn't involve (a) mortgaging the family car to buy the building materials, (b) missing too many of your favorite TV shows, or (c) trying to spread out a 4 foot by 6 foot drawing on your 2 foot by 3 foot building board?

If your answers to a, b, or c were, yes, no, or !!!, then the Micro-fish is for you> It's not exactly an ARF model, we call it an ACE (Almost Childishly Easy) to build, and it's just ideal for taking along to the slopes when the wind isn't strong enough for you GGG (Giant German Glider).

So dig out that old escapement set, or something similar that you bought many moons ago, or try one of the more recent single channel sets, and start building.

Or, er, first we'd better have a look at/for the plans to see just what it is we are going to make. The plans for our ACE (Altogether Cunningly Engineered) model are shown here, and if there doesn't seem to be quite enough for your money, you may be right, Our plan shows the model full size or, rather, enough of it to enable you to build the model without resorting to (c) in the first paragraph (pay attention now, it's getting trickier).

Handy hint. If you have access to a copying machine run off 5 sets of plans for the wings, and this will speed up the building even more, as you will see later on. We haven't produced too many building instructions, for two reasons, first it's not too interesting reading about sticking rib X to frame P and second not too many people follow them anyway. We think with a few major pointers, and the photos shown here it shouldn't be too difficult to build the model.

The fuselage is just a box, with re-inforcing at the points of maximum stress. Note the 1/16 ply under the nose, and the 1/16 sheet doublers inside the radio bay. The escapement, or whatever is used, should be located about the CG.

The fin is 1/8 in sheet, attached to the fuselage with triangular strips, and the tail platform is mounted in a similar way.

The wings are made in four pieces. Mike the four sections as shown on the plan (this is quicker you use 4 plans) omitting, as yet, each end rib. Now attach the dihedral braces to the back of the leading edge, and at each side of the main spar. The dihedral required is 1 in at the first break and 4 in at the wing tip. Now join up the wings and add the missing ribs, the tip ribs, then sand and cover.

The stab is also made on the wing plan, using the smaller leading and trailing edges shown.

Cover and finish the model as required, but remember the lighter the model the better it flies, so don't be too heavy handed with the spray can.

No particular radio installation is shown, but again, watch the weight when deciding what type to install. The prototype used an old escapement set, which just happened to be our first radio (big nostalgic sigh).

Flying instructions consist or four words - go out and fly. We found it best to choose a CG Location to suit the particular day, ballasting the model so that it flies in front or you. A few small fishing weights kept in the model box are good for this job. After a flight or two the correct CG location should be obvious, and the you too, will be an ACE (Accomplished Control Expert). Groan." 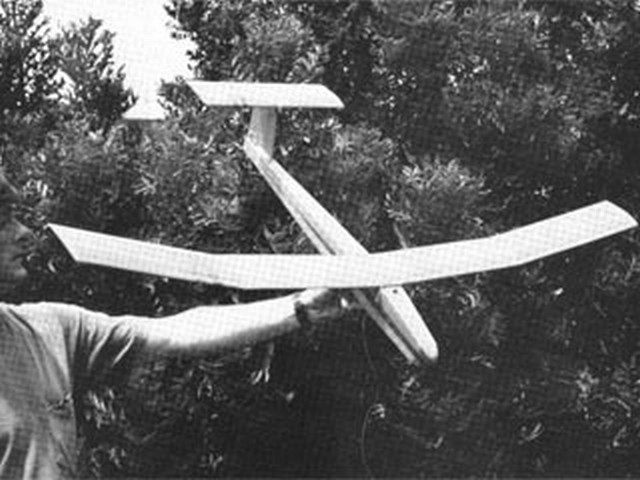