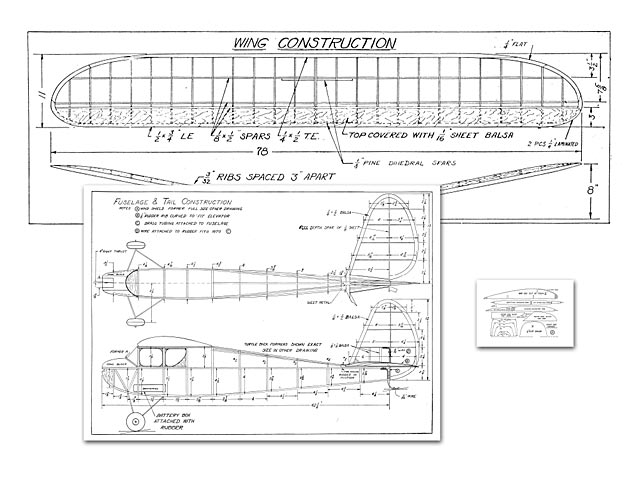 Above: The completed model is of neat appearance. Right: The ship, a familiar sight at major contests, is acclaimed for its design and competitive achievements.

THIS MODEL first attracted us at a contest in Lebanon, Pennsylvania, in September, 1935. It was a trim little cabin job. Probably the best way to describe its attractive appearance is to rank it as one of those models that make you feel as though you'd like to step into the cabin, give it the gun, and lift it right off the airport and into the air. And that's what really happened. On the first flight it took off the tar-paper runway and pointed its nose into the sky. At about 150 feet the motor stopped. But the model kept climbing and finally disappeared 36 minutes later, high in the clouds about 12 miles away.

Long didn't see his model again until 2 months later. Despite radio and newspaper appeals for information, nothing was heard about the missing ship until November, when 2 hunters happened across it while hunting in the mountains. They brought back the wandering model and it was returned to Long. This was the forerunner of the model we are presenting this month.

The model is recommended for beginners. It costs the sum of $22 complete with motor. Construction is simple, yet rugged enough to withstand the rigorous treatment the beginner is certain to impose upon it.

The wing span of the model is 78 inches. The total weight is 3-1/4 pounds. It is powered with a Baby Cyclone. Practically any other make of motor of similar power could be substituted with little change in construction. The wing is built in one piece and attached to the top of the fuselage with rubber bands. The motor is only partially cowled. All adjustable parts are conveniently available for easy servicing. 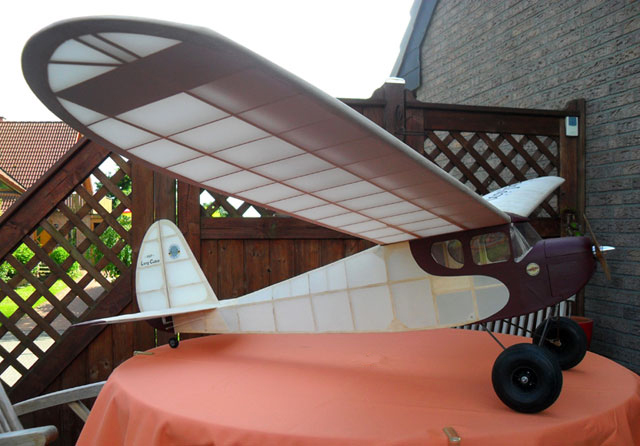 Dear Sirs, I found the plan of the "Long Cabin" at Outerzone two years ago and decided to build this nice model. Enclosed, you will find some pictures of the result [model photo & more pics 003-008]. Perhaps they are interesting for your gallery!? Thanks a lot for your great website, from Germany.
Holger - 23/08/2017
Add a comment