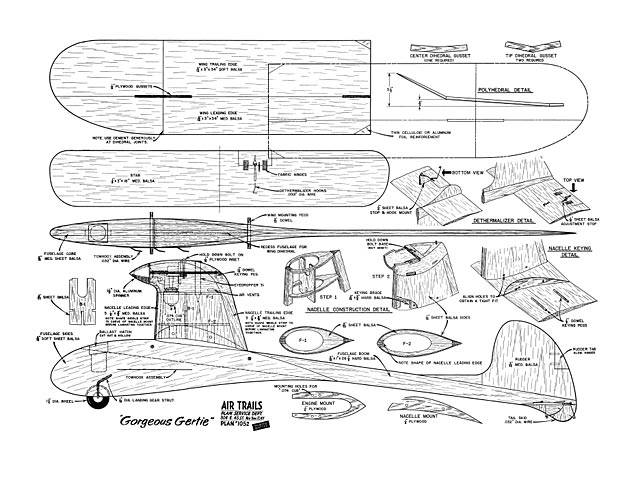 What do you prefer in a design: flyability, versatility, originality or ease of construction? Whatever your preference, you'll find Gorgeous Gertie has them all. Here is the answer to the free flight modeler who says he can't find the time to build a contest towline model, or for the towline modeler who makes an opposite claim.

Originally the design started out as a combination all-balsa hi-start and towline with the accent on streamlining and sim-plicity, but while in the midst of evolving the basic configuration. we struck upon the idea of making it a gas free flight as well. Since there was no problem as to where to locate the ignition, it was a fairly simple matter to design a compact nacelle which could be keyed in position above the wing.

When completed we found Gertie could be flown five different ways: hi-start, towline, Class AA free-flight, Class A free-flight and sport. it performs with equal merit whether it is flown as towline or free-flight gas.

As a towline it lends itself beautifully to flying, even under adverse weather conditions. The design is stable, climbs steadily on the towline and will maintain a tight left spiral with a low rate of descent. Despite the model's small size, performance is comparable to designs of much greater proportions. This can be attributed to the high degree of streamlining that was achieved.

As for gas, believe us when we say that if you're contemplating using an engine of similar power to the .074 Cub that we have used, you had better keep those dethermalizer fuses handy and have the car motor running because the model really travels. Even with the .049 Cub, which is easily interchangeable with the .074 Cub, performance was still contest caliber despite the fact that the model weighed slightly under eight ounces. Without nacelle unit, towline weight was slightly over five ounces. With the addition of approximately one ounce of ballast for glide trim, the model's weight was boosted slightly over six ounces, just about what the AMA rules specify for the wing area used.

The actual building of the model can be ac-complished in just a few evenings because of the all-balsa construction. With the exception of the fuselage boom, we used medium or soft balsa throughout; however, base your selection of balsa upon what you particularly would like to fly the model as. Detailed building information may be found on the AT full-size plans available."

Update 17/07/2014: Replaced this plan with a clearer version, also added an instructions sheet, thanks to JJ. 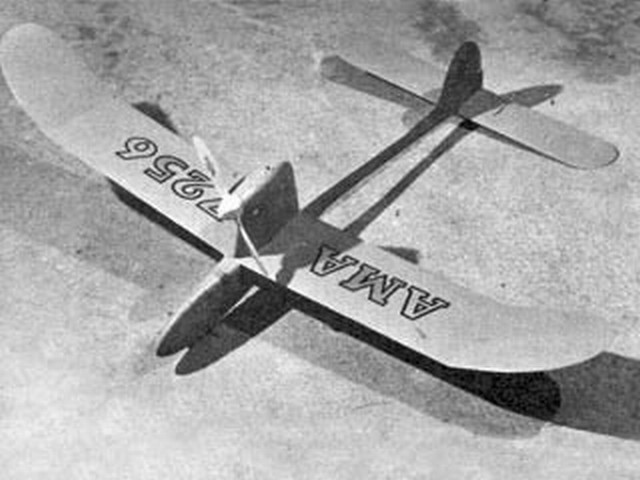