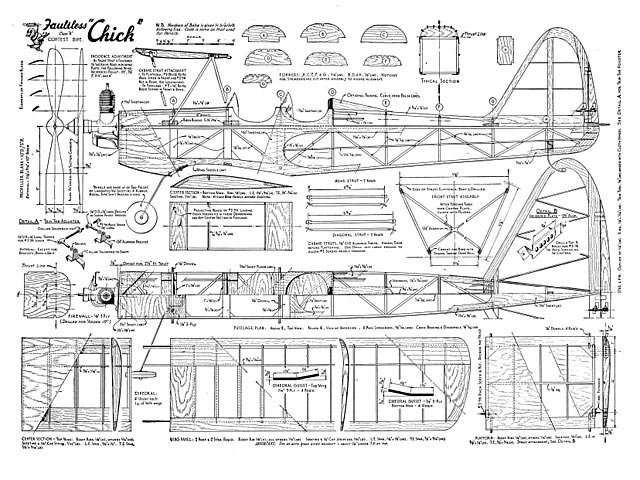 Quote: "It has taken about three years to develop this little biplane. The Faultless Chick lays claim to being more than merely unorthodox as far as contest designs go; it is definitely on a par with any monoplane we have tried, from a performance standpoint, and can hold its own against the toughest competition.

Originally intended to be equipped with radio control, the model was carefully stressed for the extra weight. Although, somehow, installation of a radio receiver hasn't yet come about, there is every indication that it could be done and that it will prove very satisfactory. A light unit is all that is required; 12 ounces of ballast has been carried with ease on many tests, especially with glo-plug ignition. This weight is somewhat more than the all-up weight of a carefully designed receiver used with lightweight batteries.

This really is an exceptional ship, but it fails short in one thing: It is not the sort of model which, as the ads say, can be built and flown in two hours. The special thin-airfoil wing requires careful, painstaking, exacting work. The cabane struts and trim tab adjusters require a craftsman's skill; haphazard butchery will only result in grief or, at best, difficulties in realizing precise flying trim. Careful workmanship will produce a model which may be adjusted to give any desired rate and angle of climb or glide. Turns may be varied with micrometer accuracy; and by keeping notes of the number of turns o the adjusting screws, and the wing in-cidence setting required for a certain flight pattern, it may be repeated as often as desired.

Construction is conventional with one new quirk added. The built-up structural angle used as main longerons is novel. The strength of this type section is many times that of a square section of equal weight, No matter how much doping may tauten the Silkpan there will be no scalloping

It is strongly recommended that a full size plan be used for building. This is available, and far more satisfactory from every standpoint than enlarging the very much reduced plate given with this text. This is particularly true of ribs, etc. which are of course accurately drawn full size on the original plan. For those who still would rather make their own layout the airfoil ordinates are given at top of this page.

Incidentally, this partctular section, under the NACA system of designation would be 6/2.5/06. It is based on the scientifically established parameters for low-speed (model) airfoils recommended by Prof FW Schmitz. The wing is extremely 'gust sensitive', a term which despite its somewhat negative sound describes a feature highly desirable in small models, It means, in common terms, that even a slight additional wind velocity is utilized to gain further altitude. Any violent or dangerous upsetting of stability is counteracted by a large stabilizer..." 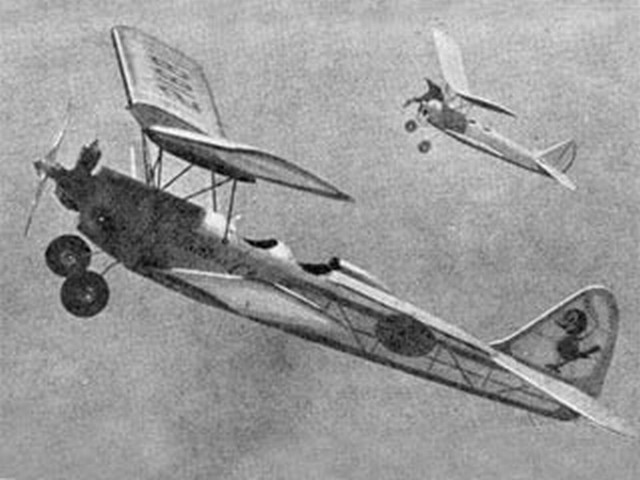