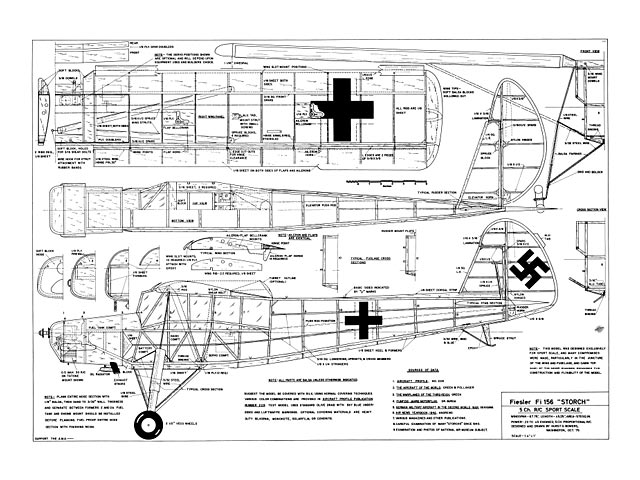 Quote: "The Fieseler Storch was a 47 ft span German STOL aircraft built from 1937 through WW2, used for observation and liaison. Powered by a 240hp V8 engine and with wing leading edge slots and tall wide-stance landing gear, it was capable of taking off and landing in just twice its own length, on rough ground.

This plan, by Hurst Bowers, was published in the April 1976, issue of Model Aviation magazine. It appears to be closely based on Carl Ahremark's 45 in span free-flight model Fieseler Storch (oz2894) from April 1953, Air Trails. Hurst enlarged it to 150%, made many detail changes like the laminated tail outlines, and converted it for 5-channel RC."

IT IS SOMEWHAT ironical that one of the most ungainly aircraft ever designed should be the product of an accomplished acrobatic pilot and fighter ace. But such is the case of the 'Storch.' It was conceived, designed, and developed by Gerhard Fieseler, one of Germany's most renowned acrobatic pilots, and a World War I fighter ace with 22 victories.

The Storch was the outgrowth of Fieseler's experience gained from work with light, highly-efficient aircraft during the early 1930s. It was one of three responses to an official specification issued in 1935 for a 2-3 seat, multi-purpose communications aircraft. The specification required that the latest aerodynamic high-lift devices be used in order to obtain maximum short take-off and landing capabilities. It also specified that the 8-cylinder, inverted-Vee, 240-hp Argus engine bhe used. And thusly, the F1-156 came into being when Fieseler's company, Fieseler-Flugzeugbau GmbH, of Kassell-Bettenhausen, was awarded the contract.

The prototype new in early 1937 and its short-field characteristics were phenomenal. To clear a 50-foot obstruction, a strip of only 140 yards was required for landing, With maximum braking, the actual ground run was no more than 42 yards under zero wind conditions. The secret to this remarkable performance was largely attributable to the long landing gear and oleo travel, and the center of gravity being well behind the wheels, which permitted maximum braking to be employed.

Major Al Williams, USMC, who was invited in 1938 by General Ernst Udet to fly the Storch, very aptly summed it up when he was quoted as saying: It was a funny-looking affair... with its great windows all that seemed necessary were a few geraniums to convert it into a conservatory...After a ground run of about 50 feet, the flying nightmare jumped into the air at an angle that had me lying on my back ...the air-speed indicator (reading) about 35 mph.

A total or approximately 2,900 Storchs were built between 1937 and 1945 in Czechoslovakia and France, as well as in Germany. All aviation enthusiasts are thoroughly familiar with the records which they made. Production even continued in France and Czechoslovakia for several years after the war, the aircraft being used for agricultural, rescue, club and glider-tow purposes, as well as military tasks in far parts of the world. I saw Storchs being used by the French in Indo China in 1953. It may be compared with the Douglas DC-3/C-47 in versatility and longevity. Even today, most small airfields which you may visit in Western Europe will have a Storch or two continuing on as working airplanes, although most of them now are equipped with radial engines.

During the past few years we have learned new acronyms such as 'STOL' and 'VTPL', and seen them applied to what one might consider to be a new category of aircraft. Such is not the case they arc merely buzz words, fads of today. The Storch was a true STOL aircraft long before we had such a name for it, as was the Curtiss Robin, the Ford Trimotor and many other aircraft from that pre-World War II era.

Why did I select the Storch for a radio-control building project? I guess I can answer that with another question: Why do people climb mountains? I had just returned from a tour of duty with 7th Air Force in Saigon and had not done any modeling for some time. I had always been fascinated by this plane, and thought that it would be a good project to get hack into the hobby with, as well as provide an interesting exercise in the use of flaps and slots on a model. Needless to say, my expectations were fulfilled. Through the years, I had collected considerable data on the Storch which, I may add, is quite easy to obtain, so I kicked-off the project on a rainy Sunday afternoon.

The construction of the Storch is truly an exercise in building, although it is generally straight forward and simple. There are, however, a few areas where caution should be exercised and specific building techniques are helpful. I shall try to point out these without going into vast detail on all other areas where the plans are entirely self-explanatory.

Begin by building two fuselage sides directly on the plans. Notice that I have marked the basic side outline with 'V' marks to eliminate confusion, particularly in the area of the cabin. Just stay within this outline, and when completed. remove from the plan and join together in the conventional 'rubber model' manner. Add the keel pieces, formers, stringers, planking, etc.. and the fuselage is complete and may be set aside.

No explanation is needed with regard to the tail. I elected to use the lamination method for constructing the outline, however. if you prefer something else. by all means use it. Just remember that the aircraft has a long tail moment and that the tail members should he kept as light as possible..." 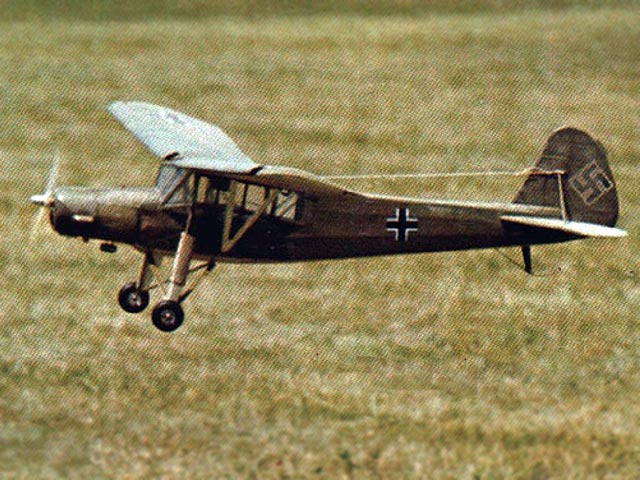