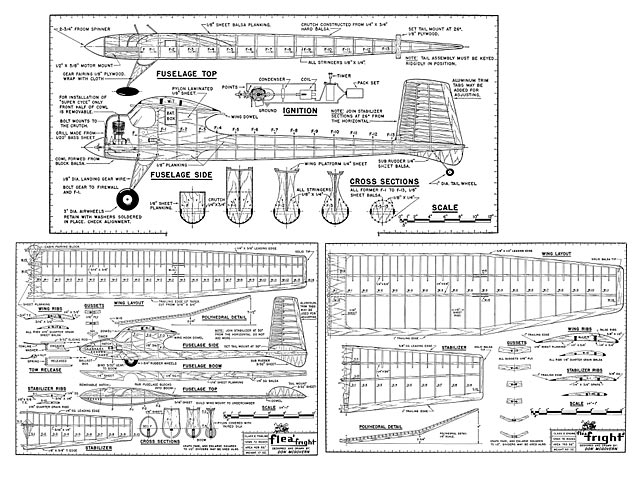 Quote: "It had long been my dream to tow a glider into the air with a gas job. This probably stems from the fact that I'm lazy, and therefore hate to tow it myself. Investigating the possibilities more seriously, I slowly evolved a design that would be ideally suited for the towing operation, and yet a design which could hold its own on the contest field. First, I decided to use the same basic design for both ships - to duplicate as many common flight tendencies as possible, proportions varying to produce the most efficient model in each category. As for size, I was in favor of large ships - 72in for the glider, 78in for the gas model, as the towing operation requires slow and very steady flight, characteristics not usually found in smaller models. Landing gears were also used in order to facilitate assisted and unassisted R.O.G. flights. As stability in both designs was of utmost importance, high aspect ratio wings and underslung booms to keep the C.G. low were used. Last but not least came the butterfly tail, which was chosen for its performance on previous models and, equally important, to permit towing the glider from a point close to the C.G., instead of from rear of the fuselage as was often tried in the past with resulting wreckage. A normal rudder would be out of the question as it would interfere with the towline. To eliminate the greatest threat to both ships - that of a careening out of control glider dragging the gas job to self destruction - an automatic cutoff is used in the towline, which permits towed flights of 5 seconds or so, until confidence and adjustment permit long flights with safety..."

Article pages, text and pics, thanks to John. 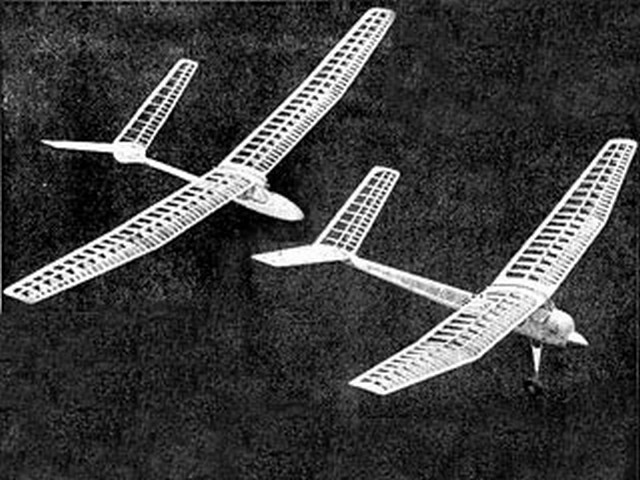