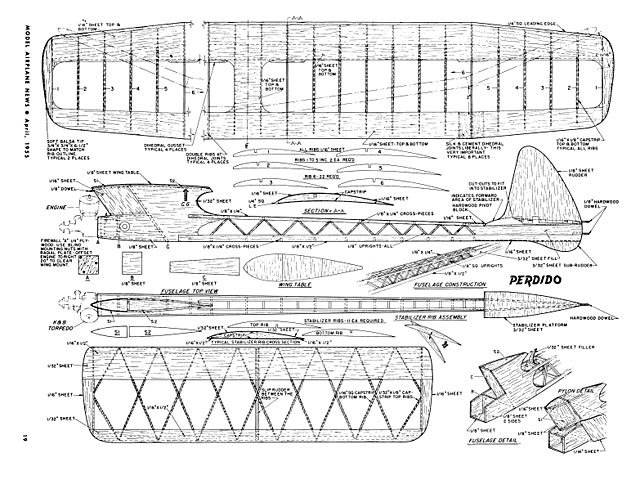 Quote: "Free flighters who really know how to build airplanes will find this definitely hot airplane does excellent job of handling power. Perdido, by Gary Christiansen.

The Perdido was conceived and built while I was at Annapolis, but I didn't get a chance to do any flying with it until I transferred to Harvard and came home for the summer. After three months of flying, the Perdido has undergone drastic revision in its force arrangement in the process of my trying to work out some ideas about controlling power in a small, fast ship. This revision, it seems to me, is the significant difference between a drawing board model and a ship more valuable for having had its bugs flown (and in this case, literally rebuilt) out of it.

The upshot of it all is a much more docile airplane than one would expect of a rather small (466 sq. in.) and a very fast ship. With a good .19 the ship really moves out, yet handles surprisingly well and isn't over-sensitive to adjustment.

Money difficulties limit a student's contest traveling; consequently, the only contests to which I've taken the Perdido have been local Intermountain area meets. In Idaho, the ship won first place in contests at Pocatello and Twin Falls. In Utah I've mainly used my B-C ship in the large class flight events. Partly because I haven't had a chance to do more traveling with the Perdido, I'm more concerned here with what the ship is as a design than with the as yet limited results of what it has done.

Intended in the original Perdido set-up was a method of controlling the looping tendency concomitant with high speed by using a large dose (8°) of stab incidence with ade-quate angular difference for recovery, giving the wing 9° with the airfoil used. I was confident that with such an ar-rangement I could hold the nose almost horizontal under full power if I wanted to.

'Twasn't so. Loops. Many violent ones. Conclusion was that wing position and incidence were largely responsible. I decided that the wing was taking the full blast of the prop stream along with the stab - only at greater angle of attack and with greater area for the prop blast to impinge upon. This reasoning quite simply explained the looping and led to the important idea behind the present Perdido. I decided to rebuild the fuselage to use the wing at 0° and set the stab at 1° negative. The idea is that the prop stream passing the wing at 0° induces as little looping tendency as possible from its impinging on the undersurface. The salient parts of the rest of the approach are a conservative combination of rudder area, dihedral and tail moment. Stab area is dictated by incidence and CG position desired and is really smaller than I prefer.

It's easier if I avoid saying anything about airfoils, but the temptation to explain what I've used in the Perdido is too great. You will notice that the sections shown are, as I term them, just curves. True, the one in the wing is undercambered and 6409-ish, but they're still just curves, and they're that way because I've lost a lot of faith in the importance of exactly plotted airfoils. I don't mean to imply that just any section will do the job as well as any other..." 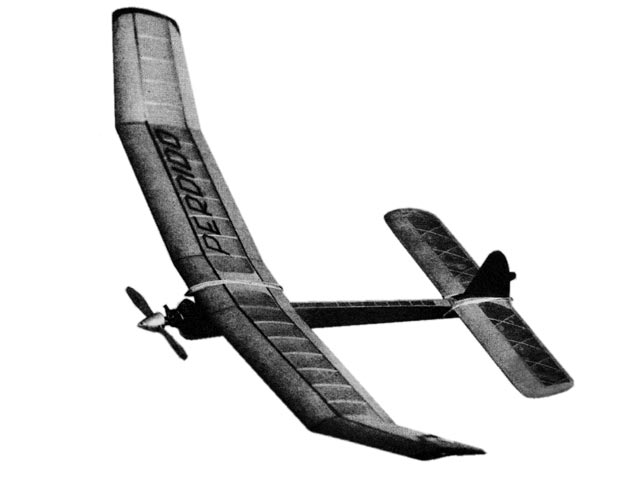