The Scientific Miss America (oz5645), designed by Frank Zaic, first appeared in 1936. This here is a reduced 25% scale version at 21in wingspan, for indoor rubber power.

Quote: "During the Northwest's long winter rainy season, the old timer modelers are turning to a new expression of their favorite pastime, rubber powered scale models of the great oldies! Mini Miss America, by Bob Stalick.

When the winters sock in the North-west, and the rains come pouring down, thoughts turn to building and flying indoor models, or just building and dreaming outdoor models. Since the rains do pour from early November through June, that does give quite a bit of building time, and flying time, too. Especially if the flying is done indoors.

For the Old Timer flier, there isn't much to do, except build another winter project for the coming summer that is until now, there isn't much to do. The Willamette Modelers Club has sponsored for two years now, an indoor old timer's scale event, and the Miss America presented here is the first model built to these rules. With flights over a half-minute indoors, it comes close to rivalling the Peanut Scale ships in duration, and its appeal is obvious to old timer and young flier alike. Everyone likes to see the Miss America fly.

A gentle roll along the gym floor and feet later, the tail lifts, another foot and the model lifts from the floor and climbs in a lazy left circle, until the power runs out, then it cruises down to a 3-point landing. Sound appealing? It is. The WMC rules for Indoor Old Timer Scale are really quite simple, too.

1. The model will be built to conform to the same categories as established by SAM for Old Timer and Antique events.
2. The model must be scaled down from the original, maintaining similar structural type, airfoils, moment arms, dihedral, etc.
3. The model must be rubber powered.
4. The model must have a wingspan which doesn't exceed 24 inches projected.
5. The model must be tissue covered. No condenser paper or similar covering permitted.
6. No folding propellers will be allowed.
7. The model must ROG. The landing gear may be modified to allow for increase in propeller diameter.
8. The model will be judged on fidelity to original plan. Proof of scale rests with the contestant.
9. All areas except landing gear length and engine compartment will be considered in judging.
10. All flights will be judged on duration. Six attempts to make one official flight.
11. An official flight is one which is airborne for 5 or more seconds.

CONSTRUCTION: The Miss America builds much like a Peanut Scale ship, and if you've been reading Walt Mooney's articles, this model should prove of little difficulty. Some points are in order, however. All of the materials used in con-struction can be purchased at any good hobby shop. The 1/64 sheet balsa called for is simply light-weight 1/32 sheet sanded down to 1/64 (or so). Choose light weight wood for all parts..." 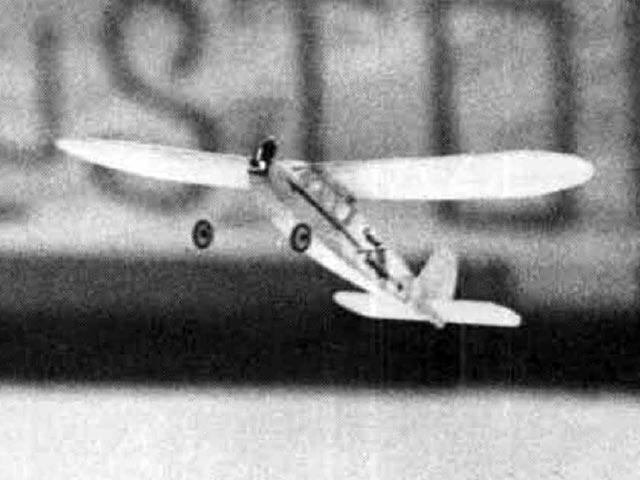