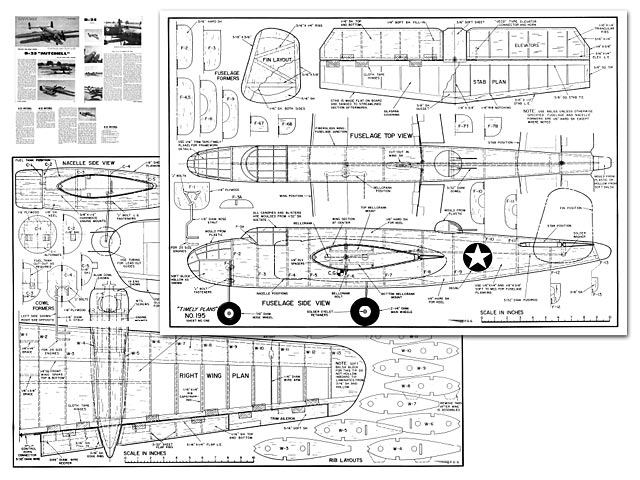 Quote: "Few aircraft in the 60 year popular span of aviation history have achieved the notoriety, and become such a popular favorite as the North American B.25 Mitchell. This could be attributed chiefly to the three historic firsts it achieved in World War II. It was the first bomber to sink a German U-boat after hostilities broke out; it was the first AAF bomber to attack the Phillipines after they were captured by the Japanese; and the final and most important first was of course the attack on Tokyo led by General Jimmy Doolittle.

In designing a twin engine stunt model of this popular craft we made several departures from scale, but tried always to maintain the rugged lines of the original scale version. From the side view there is very little to indicate that it is not scale. The fin and rudder assembly were enlarged slightly, and this was done to accommodate the enlarged stab and elevator. The scale wingspan would have been approximately 44in but on our design we increased it a full five inches on each side, as well as increasing the average chord. The nacelles were enlarged slightly to accommodate the wider wing with its thickened airfoil section. Fundamentally there were no changes to the basic outline of the fuselage with the exception that the wider wing reduced our tail moment arm slightly, and this we held to be in our favor.

Building the model was not quite as formidable as we had anticipated, this we could attribute to our desire to keep it functional and for all around flying pleasure. Noticeably absent are retractible landing gears, engine control, landing flaps and other interesting niceties which an aspring modeler can of course add, but which our own limited building and flying time would not permit.

Construction: Begin by assembling the essential materials required for the job, Since most of the parts are stock you should experience little or no difficulty. With this particular model, it is best to start the actual construction with the wing, primarily because it is twin engine, and also because it features a 'Trike' gear, moveable flaps, and all that sort of wing mounted structure, Since this was primarily a stunt model, we did away with the slight inverted gull dihedral which the Mitchell had. The absence of this made it possible to build the basic wing structure in two halves..." 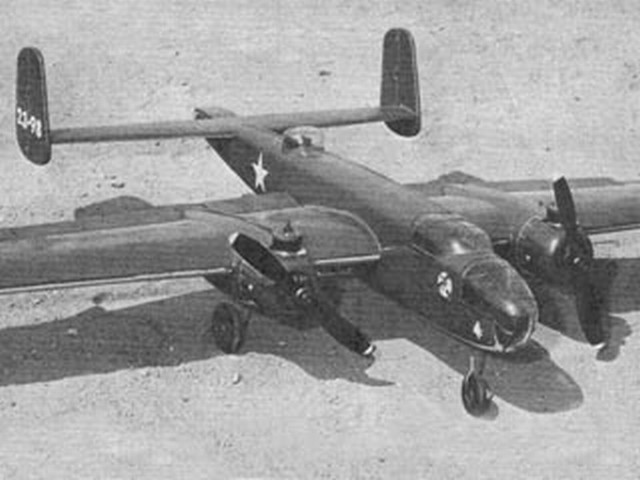