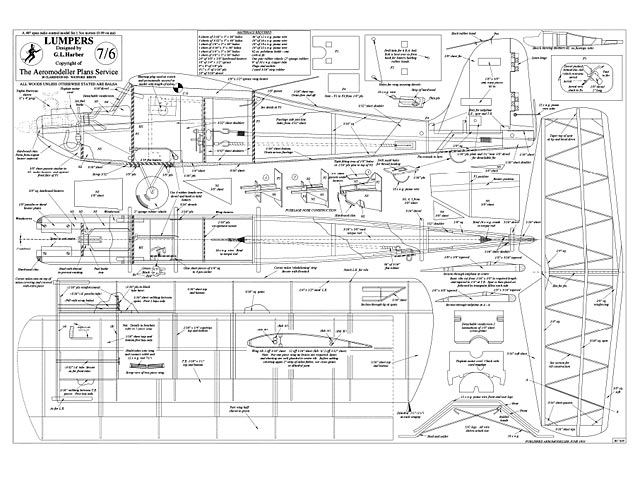 Quote: "One slight problem while I was drawing it though. The magazine article quotes that it is a 1/5th reproduction and I blindly followed. There were some funny sizes along the way but I thought they were errors on the plan, like the 2" wheels were, in fact, 1.3/4" and some of the wood sizes didn't quite seem right. Anyway I blundered on until all was finished. I then checked the wingspan on my drawing - 40", not quite the stated 48". Much swearing and cursing later I had the correct wingspan (scale by 1.2 which is really easy on the pc) but of course the wood sizes were not quite right. So the presented plan the major wood sizes have been correct (i.e. LE, TE spars) but there may well be discrepencies elsewhere. Please follow my old maxim, measure twice, mark, measure twice more, then think about cutting".

THIS 48 in toughie for single channel is the result of 3 years of development with the aim of producing the ultimate in simplicity and reliability. The original of this final design has, in 7 months, made over 230 flights with each flight averaging some 7 minutes, that is a total of some 26 hours airborne.

Visits to typical rough common land pointed to the need for a really reliable R/C job which could be carried in a balsa box strapped to the back of an enthusiastic lad on a bicycle. Hence the detail of the two piece wing shown together with the detachable fin. With this 2 piece wing the 'give' in the rods connecting the two halves allows an increase in dihedral, but this, and the small extra weight have little adverse effect on performance.

Until the advent of Terrytone a Kraft was installed, both sets proving very reliable. The Tommytone/Terrytone pair give a range that is all that can be desired - still working perfectly with the plane a mere speck in the sky. The Bonner Varicomp is driven by 3/16 in rubber which certainly gives a greater range of turns than the recommended 1/4 in rubber. 400 turns are normally applied to the rubber, which gives a safe number of 300 movements.

The conditions under which Lumpers is sometimes flown include over elephant grass country in Uganda where the blades are more like bamboo sticks and the leading edge to the wing needs some extra reinforcement. The nylon 'whaleboning' stocked by haberdashery shops as stiffening for corsets proves ideal for the purpose.

Commence construction by carefully cutting the formers from 1/8 in plywood. Cut out piece N1 from 3/8 sheet balsa and engine bearers to length. Place the cabin side of F2 on greaseproof paper on a flat surface and apply PVA glue to this, N1 and the bearers where necessary, to join and place together. Drop in F1 for use as a spacer, but do not glue at this stage. Make sure that the bearers are square to F2 between them and leave the dry whilst pieces N2, 3, 4 and 5 are cut to shape.

Next, the pieces N2 are glued to the insides of N1 and F2, and F1 is glued into position, and again sufficient time is allowed for the PVA glue to set whilst other tasks such as cutting fuselage sides and wing ribs proceed. The rugged nose assembly is then completed by screwing in the 8 BA screw through F2 and bending this as shown and then glueing into position N3, 4 and 5 followed by pieces of hardwood 'chin'. Triangular pieces of 3/8 in sheet are glued into position forward of F1 and underneath the bearers.

The fuselage sides having been cut, the top and bottom parts are cemented together, placed over the plan and the positions of the formers and actuator carefully drawn on to them. Then all the reinforcement doublers are cemented into position, checking that the space left for the actuator on its panel is of the correct width to stop it moving about. Continue cementing pieces to the sides until the sides appear as sketched..." 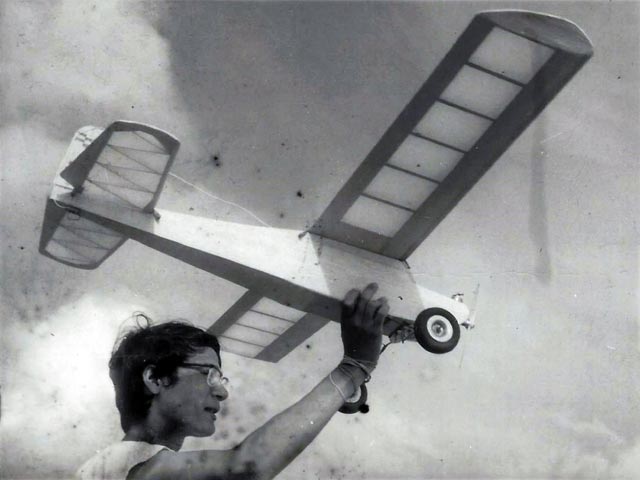 Thanks to hlsat for pointing out the discrepancy between the date on the plan (1953) and the date in the description (1963). We think 1963 is correct. We have a copy of Aeromodeller June 1953 and the Lumpers is not featured. In Hogal's original RCGroups post, he mentions the 1963 magazine. Also, Colin Usher's Aeromodeller index puts the Lumpers plan in June 1963. On the original magazine plan and article (see supplementary file), the date is blurred. I think the 1953 date was just a mistake on the redrawn plan.
Mary - 10/05/2016
Hi, Am very happy to see the plan of my very first radio control model which I built in 1972 or 73. At that time I was living in Mauritius and lost the model which flew away on first flight due to a failure of the single channel radio. Am glad I still have a picture of it before its maiden flight but the quality may not be good enough to publish on your website [see main model pic].
Today, I live in Melbourne, Australia and will probably rebuild the Lumpers thanks to your plan, for display only? Not sure yet. I am still flying models on current proportional radio systems. Thanks again for bringing back memories, With kind regards,
Noel Bazerque - 23/09/2019
Thanks Noel. That's a great photo, and it shows the structure of the model much better than the original magazine pics did. Excellent.
SteveWMD - 23/09/2019
Very popular model for single channel flyers who flew on Wanstead Flats, East London , UK, in the 60's. A lot were overpowered so to make them aerobatic, as much was possible, with single channel radio. Basil Murley, of Bazz Bomb fame flew one regularly with his own built radio, to great distances. Happy days, now long gone.
Brian Austin - 23/01/2021
Add a comment