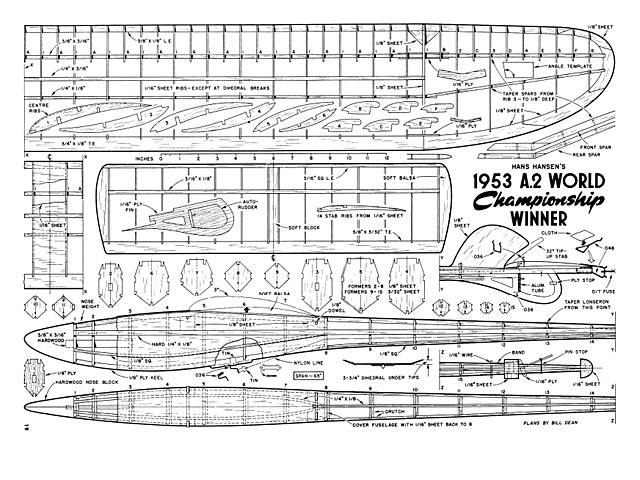 Quote: "Winner of the 1953 World Glider Championship, this outstanding A/2 design by Hans Hansen is capable of a genuine 4-1/2 to 5 minutes in still air, from a standard 328 ft towline. (A.2 towline length has been halved to 164 ft for '54 contest.) At the actual contest held at Bled in Yugoslavia, the model turned in three perfect six-minute flights (a 'max' was 5 minutes), while at the Danish Nationals earlier the same year, it also took first place with a three flight total of 14:36, in early morning air.

The design is the latest in a long series of something like 45 gliders by this leading Danish modeler. Differing from many of the fragile and 'tricky' models seen at the '53 Championship, Hansen's glider is a rugged, easy-to-fly design that is capable of good performance in both turbulent and calm conditions.

Like most A.2's from the Nordic group of countries, the original model was built mainly from spruce, which resulted in an all-up weight of 16 oz - 1-1/2 oz above the possible minimum. Hans Hansen has approved the use of balsa in the construction (with beefed up sizes) for this magazine plan in order to bring down the weight and still further improve the performance, as well as bring it into line with American building methods. However, if you wish to make an exact replica of the original, notes on the hardwood construction and a sketch showing material dimensions are given at the end of this article.

Construction is quite simple, but we suggest that you follow the correct building sequence for the shortest possible building time. Begin by cutting out all sheet parts from medium weight balsa, making 26 of each of the main (1) ribs and 24 of the 'A' half-ribs. Make modified main ribs for the center section and dihedral breaks (see plan). The fuselage keel, nose former, lower fin and dihedral braces are cut from ply. Choose good hard balsa (48 in lengths) for the spars and the fuselage crutch. The fuselage consists of a normal crutch, with formers and stringers added - the forward portion being sheeted..."

Update 05/08/2015: Have now resized this plan up slightly, to correct fullsize at 66.3in wingspan, thanks to JanOdeyn. 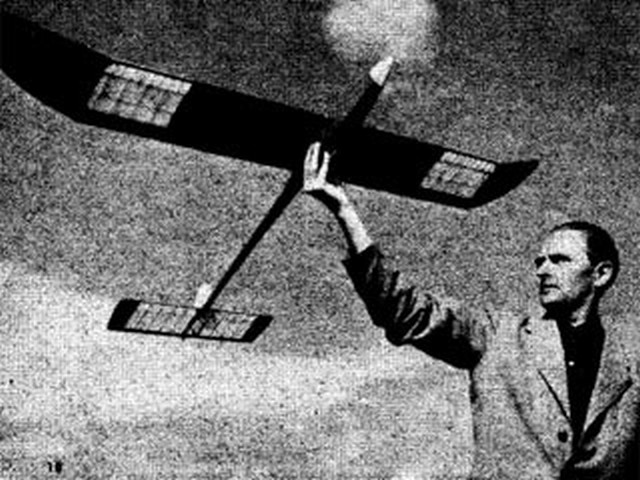 I have one of these constructed in 1956 by a friend. Here is the story. His son was on the US Coast Guard training ship Eagle on a summer cruise to Europe. A stop in Denmark, he bought a kit. It was not balsa, but very thin hardwood of some kind. On it's maiden flight it was caught by a thermal and lost. My friend then built one from balsa using the supplied full size plans. We flew this glider many times(using a de-thermalizer fuse) launching via towline. When he moved away in 1959, he gave it to me. I love this plane's great lines. Still hangs on my garage wall in Texas.
vanman42 - 17/07/2012
Several years ago I bought a kit on E-Bay for this model. It was from Denmark in the 1950's and it is called 'Victory'. I couldn't believe it when I opened the very heavy box and it was all hardwood! Parts were beautifully pre-cut of spruce, ply, and some weird woods I don’t even know what they are. Even the trailing edges were cut to a very thin tapered cross-section by what means I have no idea. The plans are all in Danish and the wing construction is very different from the 'americanized' plans offered here. I understand that the original model was built entirely of hardwoods just like this kit but I just can't imagine what the thing would weigh built up – the kit is really, really heavy already!
Eric Strengell - 28/12/2012
Hi Steve, About 40 years the Victory was our first freeflight glider. First kits were completely hardwood later they used balsa ribs. With our limited scills it was a handful to build. A lot of the spruce must be preformed before using it in the construction. We never had a wing or fuselage broken and several were lost in thermals. So although the hardwood it was a good plane.
JanOdeyn - 22/02/2013
Hi Steve I built one in the mid sixties. The kit was pure hardwood except for the wing ribs. They were made of Abachi. Lighter and sorfter than pine but heavier than balsa. I flew it first as a glider but later I built a pylon strapped on top of the wing and equipped with a Cox Baby Bee connected to an external fule tank for longer flight times. I also put in a singel channel radio control called Tele Pilot made in Sweden. The plane had great handling qualities and I flew it for several years, actually until the RC equipment became obsolete. Maybee when winter comes and the winds haul and snow falls I will build one. Kind regards,
Werner Schubert - 10/09/2014
Add a comment