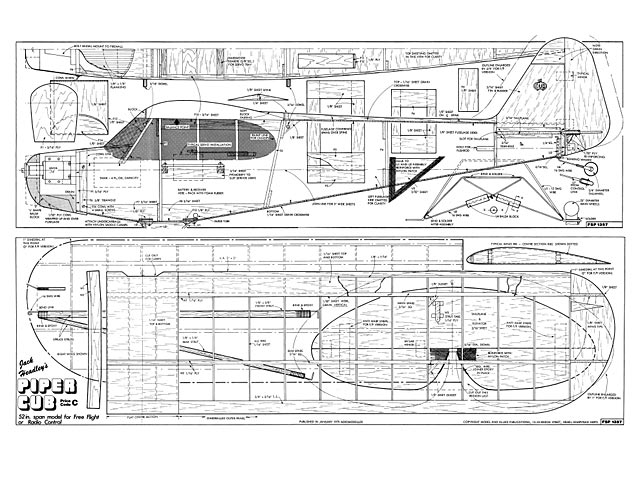 USUALLY AT THE BEGINNING of a construction article the author presents a few words on how the model was chosen/developed/agonised over, and if it's a scale model, provides a capsule history of the type on which the model was based. However, for our Piper Cub we can omit the historical details as these are already provided elsewhere in the Aircraft Described feature. (At least I hope so.) As for the reasons to build this particular model, this came in a letter from ye Ed., requesting a simple Radio Controlled cum Free Flight version of the Cub as a companion feature.

I must say that having Maurice Brett's excellent scale plans of the aeroplane was an unexpected luxury. I usually have to work from a minute 3-view copied from Janes, or some Polish equivalent when doing a scale project. In fact it was rather difficult not to get carried away and produce a super detailed version. However, my good sense and inherent laziness prevailed resulting in a sport scale model for three channel (or less), rudder, elevator, and engine control. An F/F version with suggested modifications for conversion from R/C will be discussed following the construction notes. Rather a switch, don't you think?

Fuselage: Begin the fuselage construction by making the two sides, gluing together two 3 in wide 1/8 sheets. Trace, using carbon paper or pin prick method, the outline of the side, shown with small triangular markers and slot for tailplane. Five fuselage formers are required, the firewall F1 is made from 3/16 plywood, the remaining formers being either cut from or built up, using 1/8 sheet. Glue F2 and F3 to the two sides, then install F1, F4 and F5. Pinch sides together at the rear, sandwiching 3/16 sq in between. Take care all components are square, and that the sides bow equally.

Install F6 the triangular strips behind the firewall; F7 and F8 3/16in sheet doublers in the lower front fuselage; F9 the 3/16in sheet saddles for the servo tray mounts; F10 the 3/16in doublers for the wing mount; F11 and F12 the 1/8in plywood undercarriage mounting plates.

Tailplane & Fin: Next make the tailplane and elevator from 3/16 sheet, leaving in place the 'Vee' shaped notch in the elevator. Sand the edges smooth, then cut elevator from tail-plane. Recess forward edge of elevator for dowel, epoxy into place and reinforce with nylon patch. When set, the 'Vee' notch can be cut away. This ensures the two elevator halves are correctly aligned. An 18 SWG wire joiner adds further strength, being epoxied across the Vee notch. Reinforce elevator locally at control horn location with 1/32 ply. Hinge elevator to tailplane using mylar strips epoxied in place,

Make fin and rudder individually from 3/16 sheet. Note fin extends into fuselage, and is glued on top of tailplane. Add 1/32 plywood horn reinforcements..." 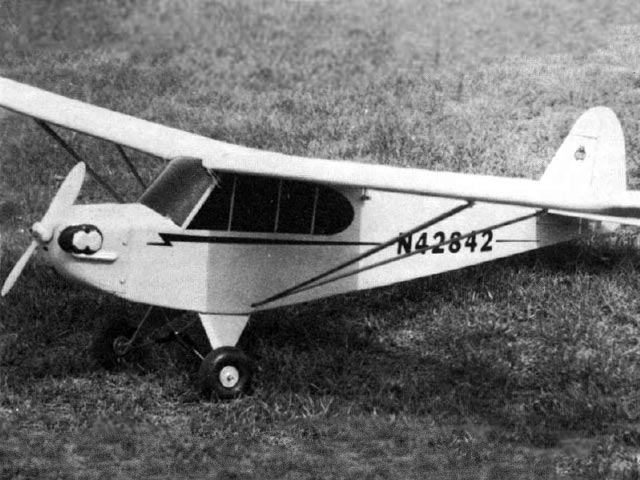