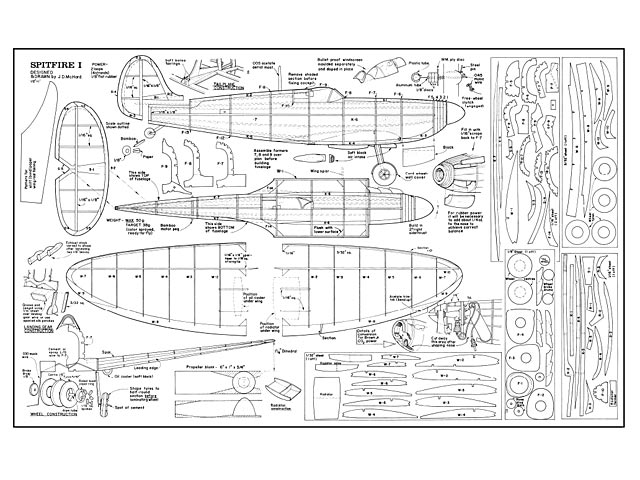 Spitfire I. Free flight scale for rubber power or CO2. Installation for Brown Jr CO2 unit is shown. Scale is 1/24. This plan is from the book 'Flying Scale Models of WWII' from Model Builder magazine.

Quote: "The Spitfire's elegant lines are still, nearly forty years after they first took the air on 5th March 1936 regarded by many as representing the pinnacle of piston engined monoplane fighter designed.The elliptical wing and smooth stressed skin construction was more costly and complex than the contemporary Hurricane, but they conferred upon the 'Spit' an edge of performance that ensured its continuance in first line service throughout and after the entire second World War.

Our model is based upon the machine flown by Pilot Officer A.S.C. Lumsden, stationed at Ibsley in 1941 with No. 118 Sqdn. The early marks of Spitfire have always been tempting subjects for scale modellers. In classic design terms, it remains one of the most beautiful machines of all time. It is, however, in model form, not the easiest of subjects. The elliptical flying surfaces are more difficult to build than straight outline types, and the short nose gives rise to balance problems in a rubber powered model. Remember that fractions of an ounce saved behind the balance point will significantly improve flying performance by reducing the considerable amount of dead weight that must be placed in the short nose to achieve the correct center of gravity.

The original model was converted for use with the Brown Jr CO2 engine, and the elimination of the rubber motor behind the wing resulted in the saving of a 1/4 ounce - not at all insignificant when one considers that the total weight is less than 1-1/2 oz! Quite apart from the improved performance resulting from the lighter model, trimming is greatly simplified, and adjustments become far less critical. So the message is clear - watch your weight!"

Update 30/06/2015: Replaced this plan with revised version (fin shape corrected) thanks to StuartBurling. 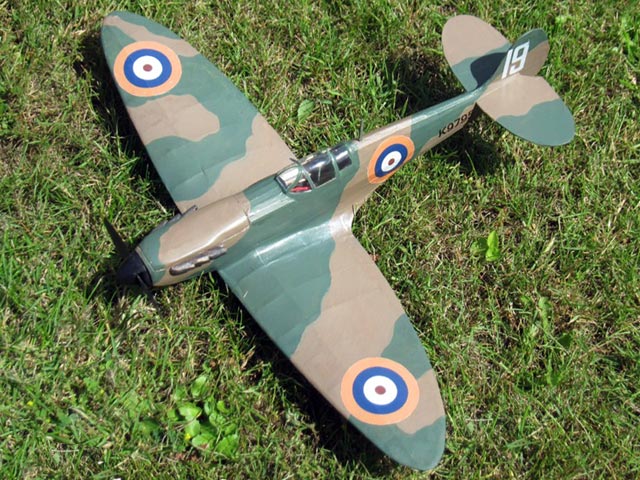 Dear Steve, Obviously this is the best small Spitfire which is why it's been plagiarised by so many other designers. The odd thing about the Spitfire is that despite its fame nobody actually produced an accurate scale drawing until the December 1960 issue of Aeromodeller when they published a stunning drawing of the Mk IX. Strangely they combined this with a separate drawing for the camouflage of the Mk VIII. From then on the MAP produced a series of drawings of WW 2 aircraft which set the standard for everyone else. That said they had to do the Typhoon twice! I bought Doug's original Spitfire at auction after his death and a friend with much more skill than me, David Deadman rebuilt it. I treasure it and certainly would not attempt to fly it. I have flown Doug's Albert Hatfull Keil Kraft Zero - and no, I don't have the plan!
RichardFalconer - 08/06/2014
Dear Steve, Here's a current colour photo [see more pics 006] of the original McHard Spitfire 1 - see my previous comment.
RichardFalconer - 12/06/2014
Hi Steve - a small but worthwhile correction to the above. The fin shape on Outerzone's Spitfire plan is somewhat distorted. You can see the difference in these two pictures (before and after) [see more pics 007] My corrected version of the plan is attached. (I used my own copy of the original publication to correct the Outerzone plan, but my work was made easy thanks to the original contributor who did all the difficult stuff, so credit for producing the plan should remain with him). Regards,
StuartBurling - 30/06/2015
It is lovely to see the colour pic of the original Doug McHard design on your web site and I am rather surprised there are not more examples showing here. I have built many different 1/24 Spitfire designs and this is by far the best (followed by the West Wings example which does not feature in Outerzone - I believe the Vintage Model Company has just bought up that entire business). That extra bit of realism that really stands out is the gull wing design of the wing root.
Here is my recently completed attempt converted to electric flight finished as the 9th production Spitfire in pre-war livery with 19 Squadron at Duxford [main pic, 008,009].
Kind Regards,
Nick Johnson - 18/07/2020
Add a comment