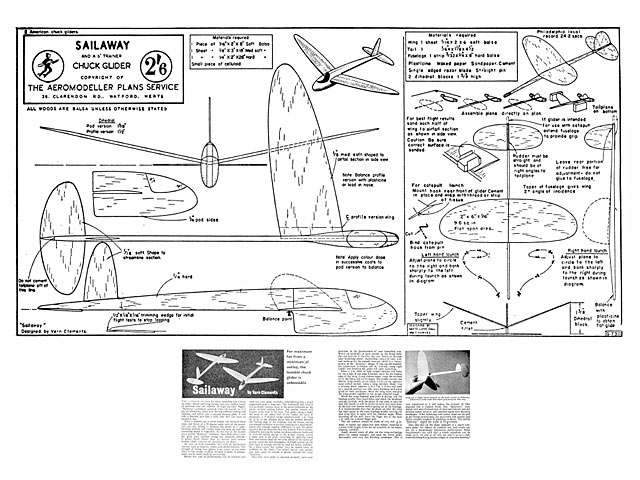 Quote: "For maximum fun from a minimum-of outlay, the humble chuck glider is unbeatable. Sailaway by Vern Clements.

Try a chuck glider for sheer modelling fun. Cheap to make, robust and long-lasting, they give endless hours of pleasure and are capable of high duration flights. 'Sailaway' continues upwards from the launch as if it has no resistance, soars over the top without stalling and dipping, and settles into a smooth floating glide. It will ride a thermal just like a bird; but first you have to launch it fast.

Draw it behind you at arms length, run forward three steps and throw at a 30-degree angle with all the power you can put behind it. Release the glider in a right-banking attitude; left rudder holds the nose up until the launching speed is expended. At the top of the launch your profile Sailaway hesitates, then skids into a very flat glide path without losing any precious altitude. It glides much slower than its heavier pod version brother (both variants are detailed on the plan).

All with so little expended, and with no mechanical worries such as engines, timers and dethermalisers. The thought of losing your gliders is no worry to you since there is little money or effort invested in them. A replacement can be made easily in an evening. Before this type of performance can be enjoyed you must test your glider carefully, remembering that a small adjustment goes a long way. The laminated pod version will probably balance close to the point indicated on the plans, without adding ballast. The profile version will require some lead in the nose.

Test glide, using a slight left warp in the upper half of the rudder for turn. If necessary, a V-shaped wedge approximately in. long by in. at the thickest point may be pushed between the trailing edge of the tailplane and the boom, taking out enough incidence to prevent looping on a hard throw. Leave just enough angular difference to pull the glider out of a dive in the event of a bad launch..." 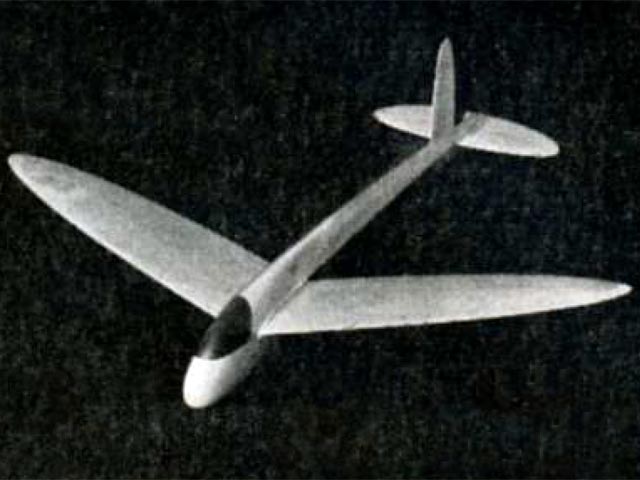