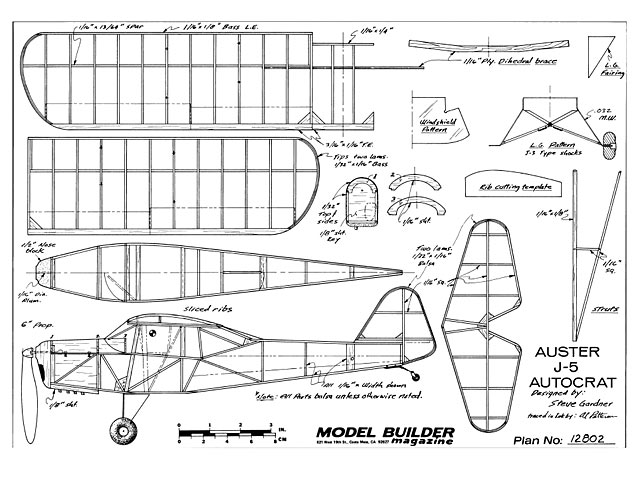 Quote: "A good flying 18-inch model of the 'British T-Craft' of the late 40s. Should be great for indoor flying if built light, or how about a double-size version for Jumbo Rubber Scale? Auster J-5 Autocrat, by Steve Gardner.

In 1940, Taylorcraft Aeroplanes Ltd of England started building Taylorcrafts with English engines. They made more and more changes to the basic American Taylorcraft until it wasn't really a Taylorcraft anymore, so in 1946 they changed their name to Auster Aircraft Ltd. They started to produce a large number of different airplanes, including the Autocrat, the subject of this article.

The J-5 was produced for use in Australasia and differed from previous models by the bigger engine (130 hp Gipsy Major) and heavier gross weight.

The model was designed for easy and light construction for the beginner and the lazy expert. It will fly very well if a minimum of care is taken and can be detailed to compete, although mine has never been flown in a contest.

Begin construction by selecting very springy, hard wood for the longerons. They have a fairly tight curve to make, so choose flexible wood. Build the side of the fuselage over the traditional Saran Wrap. When one side is finished, lay the plastic wrap over it and build the next side over the first. This will insure identical sides. This is a little difficult to do for the beginner, but it is a good technique to master.

The sides are joined next, starting at the tail and working toward the nose. Take care at the bend and the nose to keep everything straight and square. Then sheet the nose over the hard balsa formers and carve the noseplug, including a healthy dose of down thrust and a little right thrust. Install the gear and cabin braces, then the side stringers.

Next, build the wings, laying them out like the fuselage sides. The wing tips may be a bit different than the beginner is used to in kit jobs, but there isn't anything difficult about them. To make the tips, use two strips of basswood (three if you use hard balsa), about 1/32 x 1/16. Glue them together with white glue, and while still wet, wrap them around a form cut to the inside edge of the tip, and pin until dry. When they are done they will hold their shape and look good, too.

After the tips are done, place them on the board and glue them to the wing frame, then glue the spar in place and add the wing ribs to the top of the spar, taking note of the riblet at the root of the wing, and the gussets. Join the wings to the center-section using the plywood dihedral former to set the dihedral of the wings. The expert may want to reduce the dihedral for more scale points.

Start the tail surfaces by pinning the outlines to the board and building them just like the fuselage sides. The expert may also want to make the rudder and elevators separate from the stabilizers for flight trim. The model should be covered with silver or gray tissue, as the standard finish was silver dope.

The model is easy to cover and since there have been several good articles on covering with Japanese and domestic tissue, I will refer you to them for the finer points of covering. I suggest white glue and water in a fifty-fifty mix for adhering the tissue, for a neat job.

Add roundels and/or the civil regis-tration numbers to the model now. The outlines were added with a Sharpie permanent marking pen, although the old method of thin strips of black tissue will look fine and is not as risky as the pen. Assemble the model, adding the wing struts, gear fairings, tail wheel, exhaust stacks, and the windshield. Paint the details with enamel, but use it sparingly to keep the weight down.

If you haven't flown too many models successfully up to now, this one will help teach you how to trim a scale model. The model's tail is rather small and is on a short arm: this is a common problem with scale models, and the secret to easy trimming is to use a forward balance point. The forward balance point will require a largearnount of up trim to get a good glide. The model balances at the point indicated on the plans with some clay in the nose. Once you have it gliding the way you want, try some power to see if you need more down thrust than you built into the model; it is likely that you will. Let the model follow its natural turning tendency if you fly outdoors, or fly it left if indoors. Use side thrust to control the power turn and let the glide go where it will, as long as it doesn't stall or dive.

The model is powered by a loop of 1/8-inch brown rubber about as long as the model from prop hook to tailpost. Enjoy your British T-craft and please, if you do, write me about it care of RCMB." 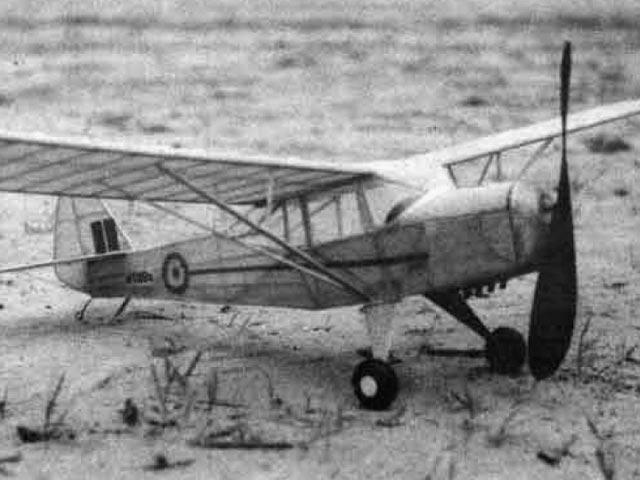