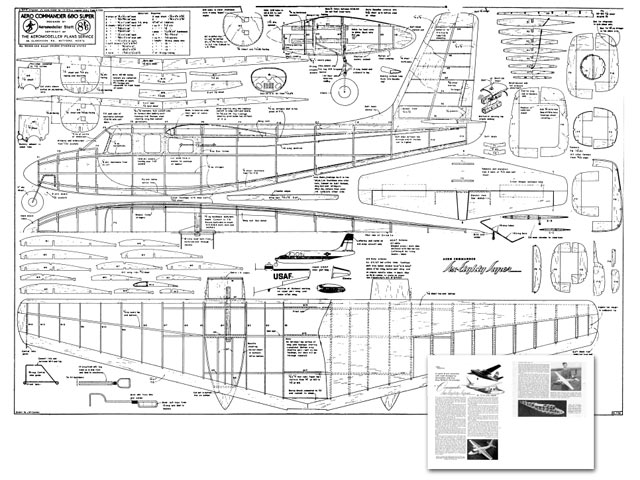 THE FIRST Aero Commander was produced by a group of engineers on a very limited purse. The design was originated by ex-Douglas Aircraft employee Ted Smith who, together with his small team, after three-and-a-half years in design and construction, saw their prototype take the air on April 28th, 1948.

The aircraft was a success from the start and much of this must be attributed to the determined way in which the designers set about keeping the airframe as light, yet robust, as possible. Other designers with the same aim in view have neglected the eye appeal of their brainchild, but not Smith, whose product must surely rank among the most elegant small aircraft flying today. The light airframe weight brought about by such features as one-piece wing and unit constructed tailplane allowed for the incorporation of a sturdy retractable undercarriage thus further increasing the performance and enhancing the appearance in the air.

The Aero Design and Engineering Company who now produce the Aero Commander, took over Smith's design in 1951 and, starting from scratch in an empty hangar at Tulakes Airport, Bethany, Oklahoma, commenced installation of equipment and machinery necessary for production. Finance was no problem, and work pro-ceeded rapidly, the first production machine rolling from the assembly lines in late autumn.

On January 30th, 1952, the Aero Commander received the C.A.A. approved flight certificate, just after one year after tooling-up started in the deserted hangar! Such was the impact of the design that even before the plane was passed by the CAA more than 50 firm orders had been placed.

This first version was known as the 520. Since then several variants have appeared, the two principal ones being the 560 and the 680 Super. These differ from the first type in many ways, but from a recognition point of view, the most noticeable difference is in the large fin and rudder which is now swept back. The latest version has a top speed of 260 mph and cruises at around 230 mph, much of the power increase is the result of engine superchargers being fitted. The increased safety factor of a twin-engined aircraft over a single is much appreciated by business executives making lengthy flights, often over difficult terrain. Single engine performance of the machine is excellent, and has been demonstrated on several occasions. A model 560 has flown non-stop from Oklahoma City to Washington on one engine!

The internal arrangements of the Aero Commander are extremely flexible. Standard seating is for five persons, but seven can be carried without undue discomfort. Seats are of the reclining type and can be removed in a matter of minutes and the machine may then be used as a light freighter, carrying a payload in the neighbour-hood of 2,500 lb.

The potentialities of the design have not escaped the American service chiefs and Aero Commanders are in service with both the US Army and the USAF. The Army uses a version of the 680, the designation being L-26C, and one of these is in use as a personal transport for President Eisenhower. The USAF Aero Commanders are of the earlier 560-A type and known in the service as the L-26B.

Aero Commanders are in service all around the world, already the success of its configuration has been recog-nised by other companies, who have not been slow in adopting many of its original features. The price, by the way, is $84,500.

The original model, reduced size plans of which appear opposite, was first made as a free-flight experiment. The motors were Frog 80s and were fed from individual fuel tanks. A piece of Neoprene tubing was run from a point on the fuel feed just before the needle valve on the starboard engine and the other end connected to a similar point on the port engine. When starting the engines, a valve half-way along this tube was closed in order to preserve the fuel suction. When both motors were running this valve was opened. The air in this connecting tube remained static as long as both motors were running and producing the same suction at each end of the tube..." 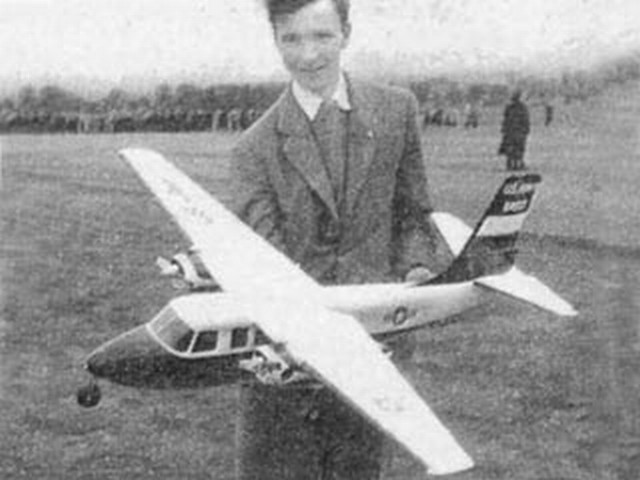