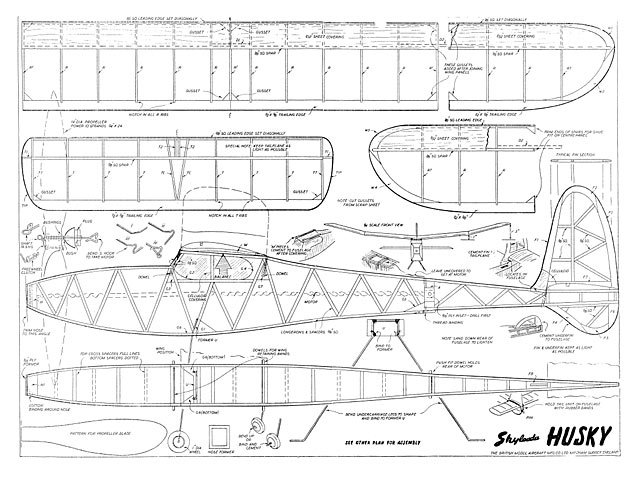 Quote: "Over the Conter Kit Reviews: The Skyleada Husky. At the time of writing, British Model Aircraft had only a mock-up kit available for review, but the first production kits should be reaching the shops shortly after the appearance of this issue.

Basically, the Husby is a conventional cabin-type rubber model proportioned on duration lines and of the right size for high performance. We were actually able to borrow the prototype models for flight testing - still undamaged, incidentally, after a lot of flying - one of which was fitted with a 15 in diameter propeller and the other a 14 in prop. What the model with the larger prop. gained in climband a slightly longer power run, it lost on the glide. So the smaller size has been adopted.

We had no difficulty at all in getting two minutes out of both models in still, damp air. Most likeable was the really excellent stability and non-critical response to adjustment. Less experienced flyers will find this a very good point.

BMA want to make a near-finished propeller a feature of this kit, inciden-tally, again to obviate any difficulty a beginner might have in producing a first class fly-able model with real performance. Nor should the beginner have any difficulty over the construction for every stage, including covering and making up the rubber motor, is covered by step-by-step drawings with captions.

Building follows conventional practice, although the fuselage side spacers are arranged in Warren-girder form. The wing has a single top spar and is sheeted between the spar and leading edge with 1/32. The section is thin and cambered, thus making it imperative to stick down the bottom wing covering to each rib. Ribs are cut from printed sheet.

By present standards this is a big rubber model kit and we particularly welcome this, since size and performance usually go together in this class. Span is 33 in and wing area 150 sq in. Keep the weight down and you will have a first class duration machine which is still rugged enough for sports flying. The wood sizes are amply strong enough throughout. " 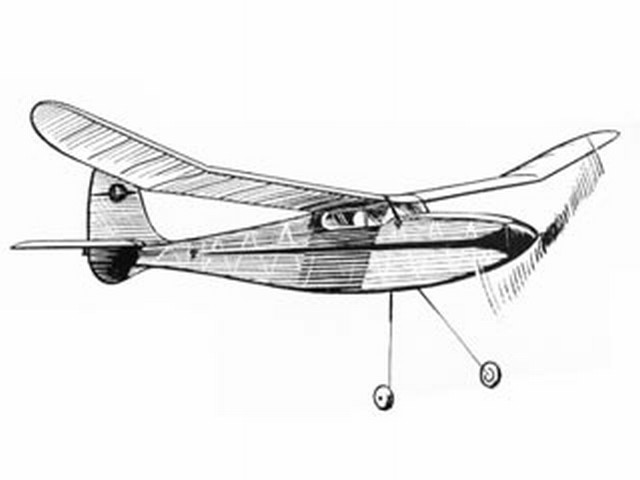