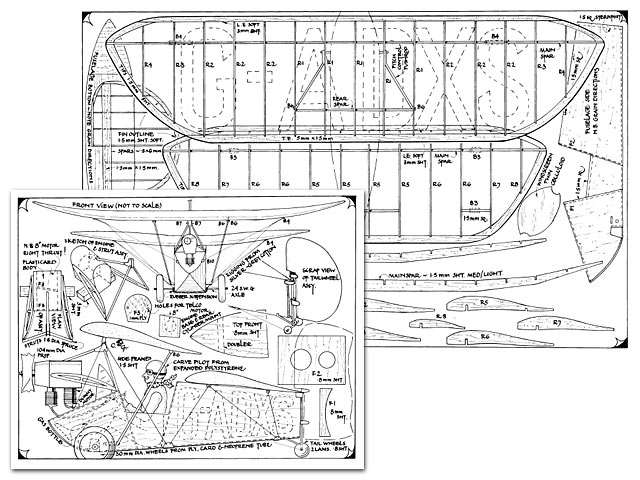 The Flying Flea has always been considered a fascinating subject for modelling, perhaps because of it s compact size and unusual shape, or perhaps because when you actually see one it looks just like a scaled-up model! The French name Pou du Ciel actually means 'sky-louse'; Flying Flea is a delicate mistranslation.

The designer Henri Mignet had an irresistible urge to fly, but he began with almost no knowledge of aircraft or engineering. He learned all he knew through his experiments and was not influenced much by fashions in aircraft design. With a wingspan of 17 feet and a length of 12 feet, the Flying Flea was designed to be the minimum aircraft necessary to get into the air.

In those days the spin was still a killer, and the Flea was designed to be, and indeed was, completely spin-proof. Using a high wing and dihedral, and a low centre of gravity, the only lateral control is the rudder, connected to the joystick. The pitch control is a little more doubtful, though. The entire top wing rocks, pivoting on a 1/4 inch bolt (which is in fact quite strong enough), and is controlled by a mechanical linkage from the joystick.

The only other control is a lawn-mower type control for the engine, fixed to one of the struts in front of the windscreen. The 'instrument panel' is completely bare! Monsieur Mignet had created a truly simple aeroplane. Engine cowlings, he believed, were much too difficult to make, and not necessary anyway. He demonstrated his machine in public on many occasions, and is even reported to have flown the Channel in it.

Thus the Flying Flea craze caught on. Home constructors everywhere began building them. Sadly, the Flea turned out to have one fatal habit; once you got into a screaming dive there was no way of pulling out. (When you pull back on the stick, the TE of the top wing approaches the LE of the rear wing from above and at high speed the slot effect gives a large increase in lift on the rear wing). After a couple of fatal accidents, the 'Flying Flea' was banned. Many examples still exist in museums, such as Old Warden.

Scale structure is used throughout this model, including scale rib-spacing and scale linkages. Even the rubber band suspension is scale - the full size uses bungee rubber. The model is very stable in flight - perhaps more stable than the full size. The 1/15 scale used gives a moderate wing loading and does not require full power from the motor. It is stable enough to cope with turbulence, but not so fast that the flying speed is unrealistic. The all-up weight of the original is 1-1/4 oz or 35g.

The Flea will do a beautiful take-off from a smooth surface, running along with the tail wheels off the ground for a few feet before lifting and climbing gently away.

Construction: Remember the lighter you build it the better it will fly, and the less likely it is to be damaged in a crash. It pays to choose your wood carefully. You will need less than one sheet each of 1/32 light and 1/16 light balsa. Balsa cement is not suitable for such light structures as it shrinks and will warp the structure. Use PVA for wood and UHU or similar for the plasticard components. Lay a thin polythene sheet over the plan when building the wings and fin.

Wings: Cut out spars, and ribs, and assemble TE and LE separately flat over the plan. Slot the TE for the ribs. Then with the main spar and rear spar raised with 1/32 packing, add the ribs of the flat centre section, ie 9 ribs for the top wing or 4 ribs for the rear wing. Allow to dry.

The remainder of the wing is built two ribs at a time as follows. When the preceding section is dry, lift the wing from the plan and crack the LE and TE carefully at the dihedral break. Lay the wing over the plan again, with 1/32 packing under the next section of spar, then add the next two ribs. Continue in this way to the tips, adding panels to alternate sides. Add the short sections of 1/16 sq spar to the rear wing, again setting it 1/32 up from the lower surface. The quickest way to build the wings is to tack the entire wing together with cyanoacrylate and then carefully apply PVA to all joints using a fine paintbrush. 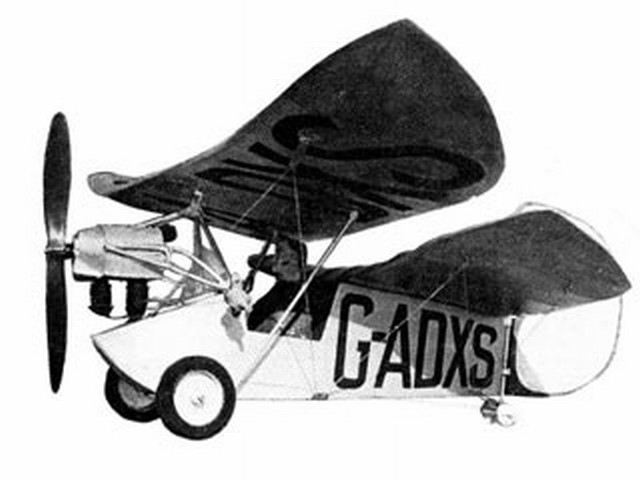