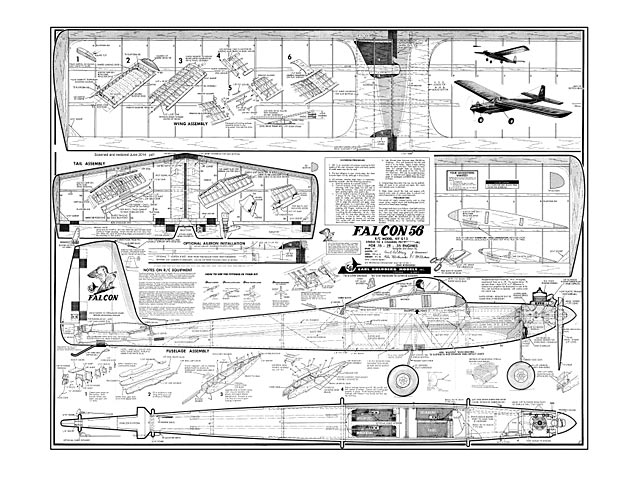 Quote: "The bird that obeys your R/C command. Falcon 56 for .09 - .19 engines. If you're just getting into R/C, or moving along into Multi then build and fly the functional, rugged, smooth new Carl Goldberg FALCON! Every design element engineered to make the simplest,sound, attractive airplane. No unnecessary gadgetry or required skills. Builds up quickly - in half the ususal time. And in the air, what smooth response to your commands - you'll soon be an expert flyer.

Quote: "Hi Steve, The Goldberg Falcon 56 plan is one of the first ones I did. Didn't get the fuselage top view accurate. Dave Plumpe added the top fuselage view and the plan has been everywhere. I redid the plan and replaced the drawings and text between the views."

Update 07/05/2017: Added an alternate version of this plan, thanks to MarcBird. This is a slightly later revision of the plan (circa 1975) and shows a wider nose.

Quote: "Steve, Here are the plans for Carl Goldberg's Falcon 56. I looked up your current plans for that airplane, and noticed the firewall width is different than the plans I'm sending you. I imagine this means there may be other modifications between this plan and the one you already have ...I called Carl Goldberg Models sometime in the early Eighties, asking for a copy of the Falcon 56 kit plans. This was about the time CGM released the Falcon 56 Mk II (oz6155) version, with the swept-back vertical stabilizer and a different firewall area for accepting a .40 engine. These plans just predate that version, still with the straight tail, but has a wider nose and firewall to accept a larger engine than the .19 originally recommended on the earlier kits.

It seems the Falcon 56 kit plans you offer currently are an earlier version. Straight tail but narrower nose. There are some other minor differences as well, so I thought I'd send this version to you so modelers would have a choice for a particular kit version.

This can be confusing, sometimes, as Carl made small changes as needed in response to customer reports after they built and flew his designs. He would also update his kit plans to show newer radio systems as they appeared through the years. Unfortunately, he never dated his revisions, that I know of. Thank you for doing this plan library. I'll bet it involves a lot of work but is very worth it. Marc" 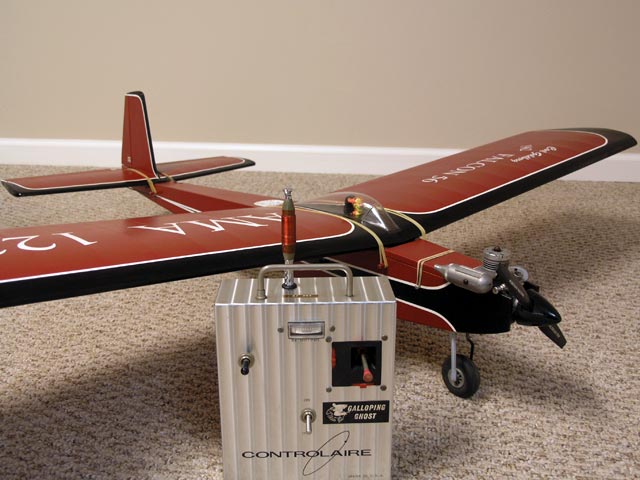 Hi, Steve. I thought I would share a couple of comments regarding the Falcon 56, based on the experiences of my friends and I, back in the 1970s. The first was built 'full-house' with ailerons and a McCoy .35 up front. This was a lot more power than the airplane really needed, and the wing eventually folded after several sessions of enthusiastic aerobatics. The second Falcon came along a couple of years later. Common sense prevailed with this one, and it was built and flown with rudder, elevator and throttle control - no ailerons this time. An OS .30 RC had been ordered, but didn't arrive in time for the first flights, so we stuck a Fox .25 RC in the nose instead. This turned out to be the perfect combination. The Fox provided enough power for good takeoff and climb performance, and cruise was acceptable. Our only complaint was that the engine didn't idle very well, so we usually landed dead stick. We did try flying it with a Fox .19, and this was definitely not enough power. If I build another, it'll have the same rudder, elevator and throttle control the last one had, and I'll probably stick my 1970s-vintage OS .25 in the nose. The later Falcon 56 Mark II was strengthened to handle a .40 up front, but I've always felt that the added weight really detracted from the gentle behavior of the earlier version. Keep the weight down and the power reasonable. Thanks again for all your hard work on the site!
Moeregaard - 08/07/2014
Hi Steve, I am attaching photos of my scratch built Carl Goldberg Falcon 56, oz2424 [main pic, 004]. I have flown it using the Galloping Ghost TX with modern servos. The plane is finished with silk and brushed dope.
Bob Noll - 11/02/2021
5/30/2021
Steve, with reference to the updates of 09/07/2014 and 07/05/2017 regarding the narrow nose. In the MAN review, Dec 1967 supplement on page 4 - FUSELAGE construction – the first sentence starts with “Warning, Warning, Warning… and goes on to address the narrow fuselage with regards to larger engines. Thus, the latter changes.
Great plans site – thanks John
John Lockwood - 30/05/2021
My first R/C plane was a Falcon 56 with an Enya 19 and 3 channels of a Kraft 5 channel Sport Series for power and guidance. One other kid showed up with a Falcon powered with an OS 15 and Kraft brick 3 channel, both of our planes flew fine with the power we put in them but I don't think an .09 would work unless single channel although with current radios you could go full house and probably have an OK flyer. My plane was modified with 1"X 1/4" spruce spars and the stab incidence reduced. After a crash the nose was widened to accept an OS .30, the plane lasted a year before a failed receiver battery cell finished it off.
Douglas Babb - 03/12/2021
When the kit box says “deluxe”, it has the wider nose and a bit more hardware. My first Falcon was a deluxe from 1969 and flown in 1970 and flew with 3 channels of a four channel Orbit and OS .19.
Bob Dible - 27/05/2022
The original Falcon 56 was designed by Carl Goldberg for radio control using single channel escapement radios and perhaps up to three controls including elevator and throttle. This was in 1962 when the kit first hit hobby shop shelves and sold like hotcakes. It was recommended for .09 engines, máximum .19. It was never designed to be a fully aerobatic model like the Senior Falcon was. My first Falcon was built in 1965 with a Medallion .15 and, believe it or not, free flight. I couldn't afford RC equipment and I loved the model.
The so-called "deluxe" version was when Carl had to increase prices and so, to compensate he included accessories such as horns, links etc, The standard version did not include any accessories. The Falcon went on to become the standard RC trainer for several years and Carl had the excellent idea updating it with wider fuselage, the possibility of adding ailerons, single piece fuselage sides and other updates including the possibility of using larger engines and modern proportional radios. After Carl's passing, more modern updates took place such as swept fin/rudder and plywood structure. I still think the beauty and fine performance of the Falcon design has never been superseded by any other model. Also Carl had the cute small Junior Falcon and the larger one Senior Falcon. Very few designs have been so well conceived. Carl was a genius, no doubt. We really miss him.
EDUARDO (From Colombia)
Eduardo - 27/05/2022
Add a comment