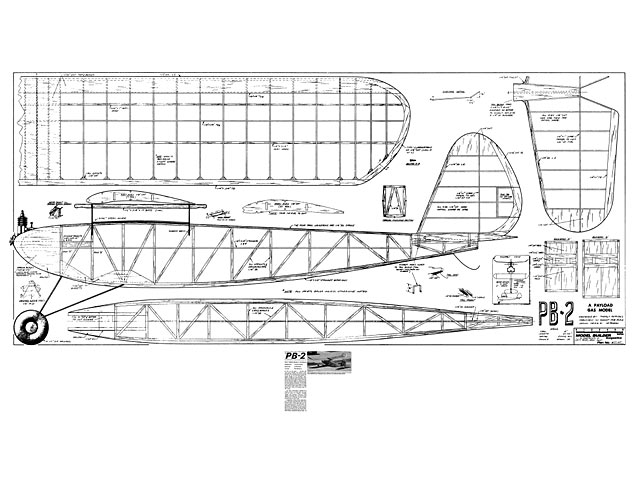 Quote: "How to build a Payload Gas Model. Complete plans and instructions to build a ship that will lift three pounds of useful load.

The weight lifting event at the recent Kresge contest was coming along just as anticipated - on all sides the heavily laden gas jobs were ploughing up large sections of the New Jersey landscape. That was the reason why we watched, without too much joy, the line in front of us dwindle. The PB-2 had already been weighed, and had received its payload of a pound and half or lead.

Soon our turn had come. The motor was 'perking' merrily when we started her on her way. She picked up speed, lifted off and started to climb. At a little after three minutes the motor cut, but we were already straining our eyes to locate the PB-2 against the late afternoon sky. And soaring conditions were good! At fifteen minutes she rolled to a stop, miles away from the field, completing the longest official payload flight on record.

In view of the excellent weight-lifting characteristics of the PB-2, this ship would seem to be the logical choice for a comparatively small, radio controlled, gas job. The PB-2 is able to lift two or three pounds of dead weight with 1/5 hp, which should be enough for a light receiving set. If however your set weighs more than three pounds, theses plans will serve as a valuable guide..." 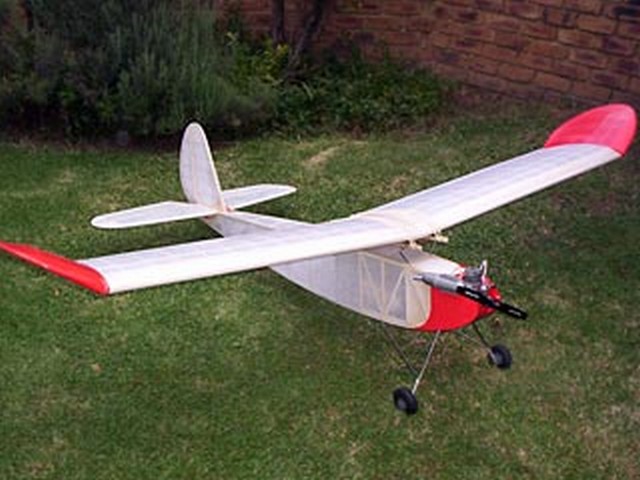 Hi Steve, One terrific site you have. The best time of my life is sitting down with a bottle of scotch in the evenings and browsing through your thousands of plans, never ever get tired of it and keep watching your site for new additions, keeps me going during the day. I built a PB-2 by Thracy Petrides from plans exactly the same as shown on your site. I scaled the plan down from an original 96" inch wingspan to a more manageable 84" wingspan. Wow what a flier, just hung in the sky. I packed up the leading edge by 1/4" of an inch which made the second flight take off less steep but then the PB-2 did not want to come down. Did not time the engine run on the first flight but with a .46 Magnum and a two ounce tank the engine run was short. First flight after the engine died lasted 47 minutes, a first for me. Second flight saw the PB-2 disappearing after the engine quite even at a wingspan of 84" inches. I had pretty severe elevator and rudder movement and even with full down down trim on the elevator the PB-2 just kept climbing. I had concerns, the PB-2 now being in the air for 59 minutes after the engine quite, the charge on the receiver battery pack and light civilian aircraft who have a runway about a kilometre from our field. The only way to keep the PB-2 in sight was to put her into a shallow dive which did reduce the altitude but as I levelled out very gently the rubber bands holding the wings snapped which resulted in total the destruction of: 1 x.46engine; 11x 6 propeller; 3 servos; fuel tank; 1switch harness; 1 receiver; receiver battery pack; 1PB-2. The only things that survived were the wheels, main under carriage wheels and tail wheel. I have included a few pics I hope you can use [model photo & more pics 003, 004]. I did not build strictly to plan, the original was for weight lifting so I left out the reinforcing diagonals because mine was for soaring and seemed ample strong enough without them. Can't wait to start building MK2, waiting for new engine, receiver battery pack, switch harness, receiver, servos, propellers, fuel tank and some wood to arrive ( thank goodness for online ordering ) and SOME EXTRA RUBBER BANDS. Never ever stop paying school fees. Painful.
GeorgeKirstein - 15/04/2014
Here are a few photos of my PB-2 electric, wingspan 84" [more pics 005-007]. Beautiful soarer, but also easy to fly exactly where you drive it. Tail very effective. Touch and go very slowly like a dream. Originally I covered it with Oratex Antique, but it was heavy and poor of spirit. Now I have re-covered it with nylon and it is more light. Weight now 2020 gr. ready to fly with battery.
Luigi - 11/01/2017
Hi. Video for plan page: https://www.youtube.com/watch?v=puQEVC2q3_c
TomásRyan - 21/10/2019
Add a comment